My Own Private Normandy 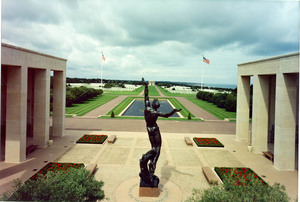 This piece was submitted by Liesl Schillinger as part of the 2014 PEN World Voices Online Anthology.

They didn’t teach us all that much about recent American history when I was a kid in public high school, in Indiana and Oklahoma. In Indiana, I remember devoting a passionate month or so to ancient history—the Rosetta Stone and Heinrich Schliemann’s Troy—with a wonderful classics teacher who wore fire-engine red jackets and looked like Dr. Doolittle, all plump and benign. He would waddle through the classroom, and chide us in Latin, “Discipuli, discipuli, audite!—Students, students, listen!” And we did listen, because at 12 or 13, the mind craves information—if only it is made to seem interesting.

But my teacher in Oklahoma, where my family had moved my sophomore year, did not have Mr. Oesch’s knack, or command such amused respect. American history at my school in Oklahoma was taught by the football coach, who in my memory remains “Couch Bowgle,” as he introduced himself in the local accent on the first day of classes. He was an intelligent man, but the course he taught required him only to sit at a large desk, keep us from shooting paper footballs at each other and give multiple choice tests once a week. As a result, for me, American history took this shape: 1) B; 2) A; 3) None of the above.

So it came as a shock one breezy June day in France, where my grandparents had bewilderingly chosen to take me when I was 14, the only kid on a TWA oldster bus tour, to see salt-white crosses, thousands of them, with American names on them, gently climbing a green hill under a pale blue sky that bled in the distance into the darker blue of the sea. We were in Normandy, just off the coast, not far from a seaside village called Arromanches. I remember the day’s program had seemed tedious after a week of castles and tapestries, salt-fed lamb and half-timbered farmhouses. What was Arromanches, anyway, and why visit a cemetery? When the bus stopped, I had jumped off impatiently, left the group behind, and started walking on my own among the crosses, sulkily. And then, looking down, I saw there was writing on the crosses, and began to read it. I saw the names of states: Illinois, New York, California, Connecticut, Mississippi. And I saw the names of Americans: Campbell from Indiana, Borderieux from Pennsylvania, Wilhelm from Montana, Sobanski from Illinois, Bergendahl and Donohue from Connecticut, Biernacki and Ingenito from New York, White from Oklahoma.

They were names that could have belonged to the Europeans fighting that war; to Englishmen, Canadians, Germans, Frenchmen, Poles. And yet, those names were in an American cemetery, thanks to accidents of geography or immigration going back only a few generations. Not far from these graves were cemeteries where soldiers of other nations lay buried, sharing some of the same last names. What had brought these men, whose forebears had come to America to leave behind Europe’s wars and hardships, back to the place where they had begun, to lie mixed again with European soil and European blood?

The crosses were plain, and my sharpest impression was of their sameness—although, close up I saw that some of the crosses had been carved at the center to make a star of David, and in those graves there were American Jewish soldiers. I looked at the dates: Died June 8, 1944. Died June 6, 1944. Died June 10, 1944. Died June 6, 1944. The guide approached and told me that many of the soldiers had been in their late teens and early twenties when they died, and then a woman on the tour told me she was looking for her cousin, who was buried there. He was 16, she said, when he was killed.

As she said that, I stopped walking; her cousin was two years older than I was when he died. I knew 16-year-olds; I could picture them playing football, going to movies, cutting in the lunch line; and I realized: The thousands of people who lay beneath the poppies and crosses not only had been alive, they had been young. What had brought them all here in that month, June 1944, and for what had they died on this ground, which, more even than Gettysburg, or church, where my family rarely went, felt consecrated?

I saw a cross that was different from any of the others. It did not give a city, or a name, or a date; it said only, “Here rests in honored glory a comrade in arms known but to God.” And I cried. Had the soldier been French, English, American or even German—the enemy? (I knew at least that much.) How could anyone be sure who was in any of the graves? Was it really possible that some God knew the unknown soldiers, knew the known soldiers, and was keeping track of those marble markers and the people who lay under them? And what of the tens of thousands of grim black granite crosses at the German war cemeteries nearby, which said again and again only “Unbekannt.” Unknown. Was there anyone who remembered their crimes, their lives, their deaths? And what did it mean that, until that day, neither I nor any American schoolchild I knew had kept track of those white and black graves in Normandy, or had studied the battle that yielded them? Would anyone possibly remember us, the unheroic, the ordinary, if the struggle of these men who fought for Europe could be so totally forgotten? After seeing the cemetery, we went to the village of Arromanches, the site of one of the beachfronts where hundreds of thousands of soldiers from America, England, France, Poland, Canada and Beligum landed 50 years ago on June 6 and fought into France to defeat the occupying German troops. This is what I learned that afternoon in the museum at Arromanches, watching a film, listening to lectures. As the lecture ended, French schoolchildren, my age, filed in behind our group, their briefcases strapped to their backs. They were skinny and chattery but quick to quiet down at their teacher’s frown. They sat obediently, and waited for the French version of the program, and I felt their advantage keenly; they were disciplined, educated and curious. They would grow up knowing almost instinctively the history I had to be flown over to understand.

Since that summer day 13 years ago, I have studied Europe’s culture, language and history, and Russia’s too, with a feeling of making up for lost time. Reporting on nationalism in Germany, Russia or Yugoslavia, or on France’s preoccupation with preserving its cultural heritage from outside invasion, I recognize familiar patterns emerging and re-emerging, almost funny in their fatedness. The national characteristics that existed 50 years ago still are with us today, as are the short-circuits that made D-Day necessary.

What is not with us is the memory of this history and its consequences, and the sense of purpose and wariness that comes from the memory. Today, the shape of Europe is changing again, and the United States stands outside the process, aloof and hesitant, because Americans do not seem to know or to remember how Europe’s change has affected our country in the past. Europeans, too, while they remember the last war, seem to forget what they did to cause it. Americans crossed an ocean to end that war; but if a D-Day needed to be fought today, would it be?

Not long ago, I went to a celebration of the D-Day anniversary at the Alliance Francaise. There was a bizarrely festive mood in the place, considering that we had come to commemorate a battle in which thousands of men had died. Some 300 people, mostly quite old, were gathered in an elegant theater, and on the stage, august veterans sat alertly beneath a flag bearing the crest of Normandy, which was red with gold lions rampant. A filmstrip played, much like the filmstrip that had taught me about D-Day at Arromanches, and then there was a brief slide lecture, showing Arromanches today, with its neat shopfronts, cobbled streets and ocean promenades; and the French countryside nearby, hills and poppies and memorials—cemeteries, statues and overblown romantic French plaques that said things like, “What we would give to see you smile, and sit and talk to you awhile,” and “Pain hit me, and from my wounds gushed a sea of freedom.”

It was, someone said into the mike, the last time that fighting and winning a war was an absolute necessity. And suddenly I understood the mood of excitement in the room; the people there were proud of what they had done 50 years ago, and it meant no less to them even if the younger generations were not aware of their sacrifice, and their victory. They all knew that, when it counted, they had risen to the occasion. And then the elderly moderator, who had a French accent, called up two men from the crowd—sergeants in a military band who were ageless in their uniforms; chessmen, soldiers—and introduced them saying, “They will play ‘Taps’ in honneur of all those who died on D-Day, to defend the liberty of Europe.” And as the young men slowly played the music in the echoing room, it seemed everyone in the audience cried, reminded of those they had known so long ago; and I cried too for the men I had never known on that hillside in France, who in that moment were young again in the only vault where anyone or anything truly lives: the mind that remembers.

This essay first appeared in the Washington Post, June 1994.