A Thank You from Khadija Ismayilova 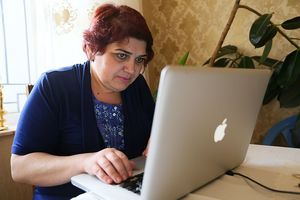 On May 25, 2016, Khadija Ismayilova, winner of the 2015 PEN/Barbara Goldsmith Freedom to Write Award, was released on probation and granted a suspended sentence in a Supreme Court decision rendered in the capital of Azerbaijan. Below, a message from Ismayilova recognizing the efforts of PEN America and free-expression defenders the world over who advocated for her release.

“The unity and solidarity that was demonstrated in my case will help all the governments understand that truth and love will always prevail over lies and hatred. Thank you for your support.”

To learn more about Ismayilova and her arrest in Azerbaijan, click here.