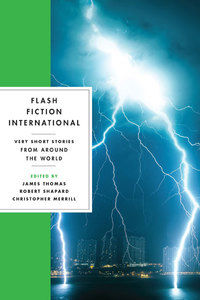 Flash fiction has become a worldwide phenomenon. As big fans of the form, PEN American Center runs a bi-weekly flash series in collaboration with Guernica magazine that features emerging and established writers from the U.S. and around the world. To highlight the international range of the genre, Flash Fiction International was published by W.W. Norton earlier this year. Along with very recent stories, the anthology includes work by Nobel winners and a few classics to give readers a sense of the form’s depth—from Kafka and Kawabata, all the way back to Babylon. American writers include Sherman Alexie, Linh Dinh, Stuart Dybek, and Jayne Anne Phillips. The book also features nearly 40 translators—from Kim Chi-Young to Margaret Jull Costa to Rashid Khattak. Here, Robert Shapard, one of the editors of the anthology, speaks to his fellow editor Christopher Merrill.

How did you put the anthology together? Did your connections help, traveling the world as director of the University of Iowa International Writing Program? What were you looking for in your selections—a wide representation?
There is nothing better than personal contact, which led us to some of the most interesting work in the collection. But we also read thousands of stories over two years, selecting from books and Internet journals and calls for submissions to translator organizations. We didn’t look specifically for wide representation. Instead we focused on finding the best stories, wherever they came from. We three coeditors [James Thomas, Robert Shapard, and Christopher Merrill] read everything, but we also had a wonderful, diverse group of people who loved to read and at times helped us rank stories. We wanted a collection that, ideally, would not only provoke and delight readers but unsettle their expectations about what a story is. We ended up with more than we asked for, traditional stories, genre-crossing pieces, still others that formed a mini-history of flash, but above all with a picture of what’s happening now, some of the best new flash fiction around the world.

You say the anthology poses genre questions. What are some of them? Do you talk about the difference between flash fiction and prose poems?
The poet and novelist Katharine Coles has a great response to the flash prose poem question, in the anthology’s “Flash Theory” section. For her, a flash fiction and a prose poem differ in their “treatment of time via the sentence.” A flash, like any fiction, operates “through cause-effect, action, and consequence,” treating time as “moving forward with the sentence.” The prose poem “is recursive in nature”—lacking the line, it finds “ways to frustrate the momentum of the sentence, and through that frustration it opens into the swiftly dilating but not forward-moving lyric moment.” Others on flash and the prose poem include Grace Paley, Sherrie Flick, and Alex Epstein. The theory section also takes on the essentials of flash fiction, the appeal of flash (besides length), and the culture of flash. For example, Aili Mu and Julie Chiu told us flash fiction is popular in China because it fits today’s technologies—flash is “device-independent”—and because flashes “offer relative freedom from censorship not enjoyed in other media.”

Why translate flash? Is there a benefit to translators of flash, or very short fiction, in particular?
Compelling flash fiction is being written now in all corners of the earth, and we wanted to share some of the magic. The benefits for translators are several. It’s a good way to introduce international authors, since many people are willing to read a very short story before deciding to invest the time that a novel requires. And flash fiction can be easier to publish than longer work. Journal editors can add variety to their contents without sacrificing a lot of space. One translator told us a very short fiction he published led to a book contract, and of course flash fiction chapbooks are all the rage.

Translations are often segregated into a sort of “ghetto” within the English-language literary world. It’s a rare occurrence for them to appear together with works written originally in English. Have you noticed any difference in the way this anthology has been received because of that?
I like to think that in this anthology the sparks created between one story and another produce a field of literary energy that inspires readers to think anew about the relationship between one literary tradition and another. Many of the reviewers note the variety of the collection—and then focus on the stories they like best, regardless of their countries of origin. Good storytelling transcends borders, in the same way that human experience is universal. It’s still early to talk about the effect the anthology will have, but we expect that, like other books in our publisher’s flash series, it will be adopted for university courses, sell well in bookstores, and stay in print for a long time. More broadly, in our research we’ve seen more journals, especially Internet journals, running very short translated fictions en face. Maybe this is a harbinger of things to come.

Read two flash pieces from the anthology: “The Tiger” by Mohibullah Zegha and “The Extravagant Behavior of the Naked Woman” by Josefina Estrada.

Christopher Merrill is coeditor of Flash Fiction International: Very Short Stories from Around the World, W.W. Norton, 2015. He is the author of many books, most recently Boat (poetry), Necessities (prose poetry), and The Tree of the Doves: Ceremony, Expedition, War (nonfiction). He is also a translator of several volumes and editor of several others. He directs the International Writing Program at the University of Iowa.

Robert Shapard is coeditor of seven W.W. Norton anthologies of very short fiction, and cofounded the journal Manoa: A Pacific Journal of International Writing. He is teaching a Master Class in flash fiction at the University of Indiana-Bloomington this fall. His fiction has appeared widely in journals, was recognized by the National Endowment for the Arts, and won a national flash fiction chapbook competition.