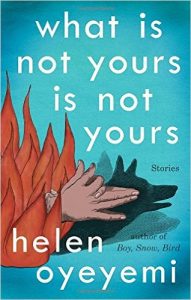 Helen Oyeyemi’s What Is Not Yours Is Not Yours is the winner of the 2017 PEN Open Book Award.  The following is an excerpt from the book.

This happened and it didn’t happen: A man threw a key into a fire. Yes, there are people who do such things. This one was trying to cure a fever. He probably wouldn’t have done it if he’d had his head on straight, but it’s not easy to think clearly when rent is due and there isn’t enough money to pay it, and one who relies on you falls ill for want of nourishment but you have to leave him to walk around looking for work to do. Then even when you find some there still isn’t enough money for both food and shelter, and the worry never stops for a moment. Somehow it would be easier to go home to the one who relies on you if they greeted you with anger, or even disappointment. But returning to someone who has made their own feeble but noticeable attempts to make the place a little nicer while you were gone, someone who only says “Oh, never mind” and speaks of tomorrow as they turn their trusting gaze upon you . . . it was really too much, as if tomorrow was up to him, or any of us . . .

There’s that difficulty with delirium too: You see it raging in another person’s eyes and then it flickers out. That’s the most dangerous moment; it’s impossible to see something that’s so swiftly and suddenly swallowed you whole. Arkady’s debts were so numerous that when he found himself being beaten up by strangers he no longer bothered to ask who they were or why they were hitting him—he just assumed it was something to do with his repayments. Instead of putting up much of a fight he concentrated on limiting damage to his internal organs. A friend of a friend of his knew a woman who bought people’s organs in advance of their death. This woman bought your organs and then made your death relatively nice for you, an accident when you least expected it, a surprise release from life. Once that was taken care of she paid the agreed sum in full, cash in the hands of a person of your choice. Arkady felt his heart and lungs throughout the day—they felt hardy enough, so he had a Plan Z. Why go straight to Z, though.

Throwing the key into the fire was the first step of this man’s fever-born plan. The second step involved the kidnapping of a girl he had seen around. He felt no ill will toward this girl, and this was in itself unusual, since his desperation had begun to direct him to linger on the street wishing misfortune upon everyone he saw. That lady’s maid hurrying out of the jeweler’s shop—he wished she would lose some item of great value to her mistress, so that he might find it and sell it. Yes, let the lady’s maid face every punishment for her carelessness, he wouldn’t spare a single thought for her. As he passed the grand café on his city’s main boulevard he wished a dapper waiter carrying a breakfast tray would slip and fall so that he could retrieve the trampled bread rolls. And how would it be if this time the waiter had slipped and fallen one time too many and was dismissed? Even better—then I can replace him.

The girl he planned to kidnap happened to be a tyrant’s daughter. Hardly anybody disliked her; she was tall and vague . . . exceedingly vague. Her tendency toward the impersonal led to conversations that ended with both parties walking away thinking: “Well, that didn’t go very    well.” If you mentioned that you weren’t having the best day she might tell you about certain trees that drank from clouds when they couldn’t find enough moisture in the ground beneath them. She was known as Eirini the Second or Eirini the Fair, since she had a flair for the judicious distribution of cake, praise, blame, and other sources of strife. In terms of facial features she didn’t really look like anybody else in her family. In fact she resembled a man her mother had secretly loved for years, a man her mother had never so much as spoken to until the day the tyrant decided to have his wife Eirini the First stoned for adultery. He did give her a chance, one chance. He asked her to explain why his eyesight kept telling him that his daughter was in fact the child of another man, but the woman only answered that there was no explanation.

The man Eirini the First loved heard about the resemblance between himself and the child and came down to the palace to try to stop the execution. He swore to the tyrant that he and Eirini the First were as good as strangers, but the tyrant waved him away and signaled his executioners to prepare themselves, at which point the man Eirini the Fair resembled ran into the center of the amphitheater where Eirini the First stood alone with her arms forming a meager shield for her face and chest. The man Eirini the Fair resembled stood before her with his back to the executioners and the tyrant and told her to look at him, just to keep looking only at him, and that it would be all right. It seemed he intended to protect her from the stones until he couldn’t anymore. This was intolerable to the tyrant; he could not allow these two to exit together. There was also a sense of having just witnessed the first words they’d ever said to each other. The tyrant feared a man who had no qualms about involving himself in a matter such as this, so instead of going ahead with the execution he had his wife returned to the palace.

As for the man Eirini resembled, he asked to see the child just once—he’d never been more curious about anybody in his life, he said—but his request was denied and the tyrant had him drowned, as had been the case with all other enemies of the tyrant’s state. All any citizen had to say was, “The last king was better,” and somehow or other Eirini’s father got to hear of it and then you were drowned in the gray marshlands deep in the heart of the country, far from even the most remote farmhouse. The air was noxious where the drowned were. The water took their bones and muscle tissue but bubbles of skin rose from the depths, none of them frail, some ready for flight, brazen leather balloons. Houses throughout the country stood empty because the tyrant had eliminated their inhabitants; the swamp of bone and weights and plasma also had house keys mixed into it, since many had been drowned fully clothed along with the contents of their pockets. Eirini the Fair was aware of the keys. She visited the marshlands as often as she dared, crossing narrow stone bridges with a lantern in her hand. She went there to thank the man she resembled for what he had done, but he couldn’t be separated from the rest of the drowned; Eirini the Fair swung her lantern around her in a circle and when her tears met the water they told their own meaning as they flowed from eye socket to eye socket.

Among those the tyrant hadn’t had drowned yet there was a great eagerness to be rid of him, and Arkady knew that if he went through with his plan to kidnap the tyrant’s daughter he would not be without support. The tyrant had started off as an ordinary king, no better or worse than any other, until it had occurred to him to test the extent of his power. And once he found out how much power he really had, he took steps to maintain it. A ration system was in place, not because resources were scarce or because it was necessary to conserve them, but because the tyrant wished to covertly observe the black market and see what exchanges people were willing and able to make. Not just goods, but time . . . How much time could his subjects bear to spend queuing for butter? What about medicine? This was the sort of thing that made life for his subjects harder than life was for citizens of neighboring countries.

Eirini the fair was sure that her father was detested. He was a man who only laughed when he was about to give some command that was going to cause widespread panic. She didn’t doubt that if anybody saw a way to annoy her father by harming her, they might well do it. But she was well guarded, and it escaped her notice that she was being intensely observed by the kind of person who would melt a key.

The tyrant had orphaned him, had Arkady’s mother and father drowned in the middle of the night, so that the boy woke up in an empty house wondering why nobody was there to give him breakfast. Young Arkady prepared his own breakfast that day and continued to do so until there was no more food, and then he went out onto the street and stayed there, leaving the front door open in case anybody else had a use for his family home.      

This is an excerpt from the linked short story collection What Is Not Yours Is Not Yours, published by Riverhead Books/Penguin Random House in 2016.