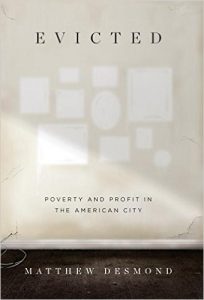 Matthew Desmond’s Evicted is the winner of the 2017 PEN/John Kenneth Galbraith Award for Nonfiction. The following is an excerpt from the book.

The morning of her sentence hearing, Vanetta roused her children, fed and dressed them, and began re-ironing her outfit on the living room floor. Besides installing the stove and refrigerator, she hadn’t been able to do much else in the apartment, and it felt empty, unlived-in. Kendal joined Vanetta in the living room, standing with his hands at his sides in the tawny glow of the morning. She had dressed him in a red-collared shirt and his new shoes. A few feet away, a picture of him at his preschool graduation, in a cap and gown, was displayed on the mantel.

Vanetta put down the iron and took a breath. “Kendal, will you come to court with me?” she asked, just as she had the night before.

Kendal saw that she needed him. “Momma, I will go to court with you,” he said decisively.

“If they give Momma the punishment, what you supposed to do?”

“Stick together, take care of my sister and brother, and listen to my titi.”

At the last minute, Vanetta had decided to ask her sister to care for her kids if she was sent away. She couldn’t say why.

Vanetta arrived at court early, quietly shaking under a conservative black sweater and matching slacks. She had put on makeup and earrings and had pulled her hair tight around her head. She paced the hallway, trying to think of what she would say to the judge, periodically stopping to watch the ponderous gait of shackled black men in orange prison uniforms. Shortcake showed up in a knit cap and winter coat, along with Vanetta’s twin brother and younger sister. Ebony stayed home and watched Tembi, Bo-Bo, and the rest of the kids. Later, the preacher’s wife and another white woman from the All Bible Baptist Church, Vanetta’s congregation, would join them in knit sweaters and thick glasses.

When it was time, Vanetta took a seat next to her public defender, a foot-tapping white man in a plain black suit. The courtroom didn’t look like the kind you see on television, those open-air theaters with balconies, large ceiling fans, and people crowded into wooden pews. It was a small space, separated from the audience by a thick wall of glass. Ceiling speakers broadcast court proceedings to onlookers.

The prosecution went first, represented by a fit, pink-faced assistant district attorney with thinning hair and trimmed beard. Many things about Vanetta impressed him. She had not been arrested before and had “some employment history.” “She apparently attended school into the eleventh grade. That is better education, as sad as that is, that’s better education than many of the defendants that we see.” He continued, “She has family support. That’s good. . . . Unfortunately, that same level of emotional and family support was available at the time of this offense, and by itself wasn’t sufficient. . . . I don’t doubt that the decision was driven by desperation, but the fact that it was desperation does not minimize its impact on the victims.” One of the victims didn’t carry a purse anymore and didn’t feel safe in her neighborhood, the prosecutor reported. “It is the state’s view that people need to know when you use a gun to take things from other people, you go to prison.”

Vanetta’s public defender spoke next, offering a sprawling but impassioned case for leniency. Vanetta was remorseful, he said, and had confessed to the crime. She was younger and “less street smart” than her accomplices. Her friend had held the gun. It was a crime of mean circumstances. “I believe punishment can be accomplished in a community setting,” the public defender concluded. “I don’t believe that you have to send her away.”

It was Vanetta’s turn to speak next. She “took full responsibility” for her actions and apologized to the victims and the Court. “At the time of this situation, me and my kids were going through a difficult time in our lives and on the verge of being evicted and our lights being cut off. I was overwhelmed by the difficulties. But this doesn’t excuse what I have done. . . . At this time I’m asking for leniency for me but, especially, for my children.”

Then it was time for people to speak on Vanetta’s behalf. The preacher’s wife said, “I have observed in her a quiet calmness in the midst of trying circumstances.” Shortcake offered four sentences. Vanetta’s twin brother said that they “had just made twenty-one” and that his sister’s children needed to wake up to their mother, not to their aunties and uncles.

Finally, it was the judge’s turn. An older white man, he began to recap what he had just heard. “So this was a general discussion about the nature of this offense, basically, that it was an aberration . . . a crime of desperation. I look at that. But I’m also mindful of the fact that between then and now nothing has really changed. . . . I’m saying that the overall economic situation hasn’t improved. Has it, Counsel?”

“No,” the public defender answered. He had argued that Vanetta had been looking for work. He hadn’t pointed out that Vanetta rose at five each morning but still had little time to find a job between searching for a new place to live, attending GED classes, and caring for her children—or that employers usually did not hire people who had recently confessed to committing a felony.

“No,” the judge repeated. “And, quite honestly, I don’t know that it got any better after that time, maybe a little worse, based upon what’s occurred and the fact that she’s kicked around and moved around.”

What the judge was saying, in essence, was: We all agree that you were poor and scared when you did this violent, hurtful thing, and if you had been allowed to go on working five days a week at Old Country Buffet, refilling soup pots and mopping up frozen yogurt spills, none of us would be here right now. You might have been able to save enough to move to an apartment that was de-leaded and clean in a neighborhood without drug dealers and with safe schools. With time, you may have been able to get Bo-Bo the medical treatment he needs for his seizures, and maybe you could have even started taking night classes to become a nurse, like you always wanted. And, who knows, maybe you could have actually become a nurse, a real nurse with a uniform and everything. Then you could really give your kids a childhood that would look nothing like the one Shortcake gave you. If you did that, you would walk around this cold city with your head held high, and maybe you would eventually come to feel that you were worth something and deserving of a man who could support you other than by lending you his pistol for a stickup or at least one who didn’t break down your door and beat you in front of your children. Maybe you would meet someone with a steady job and get married in a small church with Kendal standing proudly up front by the groom and Tembi as the poofy-dressed flower girl and Bo-Bo as the grinning, toddling ring bearer, just like you always dreamed it, and from that day on your groom would introduce you as “my wife.” But that’s not what happened. What happened was that your hours were cut, and your electricity was about to be shut off, and you and your children were about to be thrown out of your home, and you snatched someone’s purse as your friend pointed a gun at her face. And if it was poverty that caused this crime, who’s to say you won’t do it again? Because you were poor then and you are poor now. We all see the underlying cause, we see it every day in this court, but the justice system is no charity, no jobs program, no Housing Authority. If we cannot pull the weed up from the roots, then at least we can cut it low at the stem.

The judge sighed, and a silent moment passed. The court stenographer steadied her hands above the keys and waited. Kendal, asleep on Shortcake’s lap, breathed noiselessly. The judge ruled: “This is not . . . a probationary case. I am going to impose eighty-one months in the state prison system. It’s going to break down to fifteen months of initial confinement and sixty-six months of extended supervision.”

The bailiff approached Vanetta and told her to stand to be handcuffed. “Oh, God,” Shortcake let out. She shook Kendal awake and took him to the glass. “Wave goodbye, son.”

Hands behind her back, Vanetta turned around, tears streaming down her cheeks. Kendal stared back stone-faced, strong, just like his momma had taught him.

This is an excerpt from the Pulitzer Prize-winning book  Evicted, published by Crown Publishers in 2016.