Excerpt from “Travels With Ramazan” 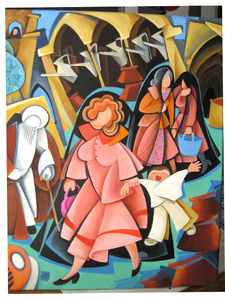 The following excerpt “Travels With Ramazan,” is by Meghan Nuttall Sayres from her new anthology Love and Pomegranates: Artists and Wayfarers on Iran (Nortia Press). The two passages show when Meghan first meets Ramazan, a 90 year old weaver, and, after they return from visiting a Zoroastrian shrine in the mountains of Chak Chakoo, a site hours from Yazd, Iran. The area has been the home to the majority of Zoroastrians in Iran, and the center of this religion worldwide.

From outside my guide Amir and I could hear the tock of Ramazan’s weaver’s shuttle, the loud noise of metal slamming against wood, as we approached his studio in Yazd, Iran. The sound mixed with shouts of glee from the schoolyard beside his workshop, its cheerful gate painted with flowers and stars. On a nearby adobe wall, someone had spray painted in red: “Friendly internet here.” I was struck by how the neighborhood, with its mud walls likely dating back some four thousand years, was now wired for web access and adorned with illegal satellite dishes. My guide thought that because I was a weaver, I might enjoy a visit with Ramazan.

“Actually, I love visiting with this man,” Amir confessed. “You are a perfect excuse to stop in.”

Inside, we found the 90-year-old master weaver perched on a stool in the middle of thousands of blue and orange threads that made up the warp on his loom. He sat knot- ting split ends together.

“You are very welcome here,” he said to me with the help of Amir. The weaver disengaged from his warp threads. He moved very slowly. “You’re from America?” His brow lifted, but he smiled.

Fabrics hung on every wall. Ramazan’s colors—bright white, yellow, pink, red and orange—I would soon learn reflected his playful inner light. They resembled a hippie-like, striped tie-dye design that is typically found in the Central Asian cities of Samarkand and Bukhara, which were once part of the Persian Empire.

He offered me a chair to sit beside him, explaining that his 65 years of weaving on a fly-shuttle loom left his joints sore. “I hear there is good medicine in America. Do you have something you can give me for my knees?”

While I didn’t have a remedy for the weaver’s arthritis, I happened to have a skein of my own sheep wool with me. I had been knitting during my travels.

“What am I to do with this?” he said, a grin stealing across his lips. “It’s not enough to make a coat.” The lines creasing his face hinted at stories of life lived fully. Placing the wool on his nearly hairless head, he said. “Perhaps I’ll make a hat.”

Ramazan agreed to demonstrate his weaving for me, easing himself upright with the aid of a hand-carved wooden cane. It took some time for him to walk the length of his unusually long warp (at least twelve feet long) and climb into a pit to his bench seat. His 400-year-old loom was made of walnut. Reaching for a rope above his head, he tugged hard, sending the fly shuttle sideways into motion while pumping the wooden foot treadles with his stocking feet. Up and down went his knees. Back and forth went his shuttle. For decades he has come here to work in the heart of the old quarter of Yazd, a maze of adobe homes with domed rooftops.

I told him about a recent tapestry I had woven, confessing how much I disliked warping my little loom. I hadn’t the patience to string a mere one hundred threads through the heddle.

“Kheili khoob. Very nice,” he said, holding my tapestry depicting a mosque, the Sufi saint Rabi‘a, and a poem attributed to her in Arabic script. “Very good.” My young guide told Ramazan about my novel in which the protagonist is a nomadic weaver. As Amir translated Ramazan gave me the thumbs up and chuckled. Though Ramazan intended his gesture to be interpreted as it would be in the West, we all knew that in Iran it meant the same as giving someone the middle finger.

On the way home we made a few more cigarette stops in the blustery expanse of desert. The master weaver told the legend about a young Zoroastrian princess Shahrbanu (Lady of the Land). In the middle of telling his tale, Ramazan’s cell phone rang. “Yes?” he answered. Amir translated what he said next for me. “I’m in Chak Chakoo with an American woman. No. I am not joking.” He laughed and hung up the phone. “She doesn’t believe me,” Ramazan said to us. It had occurred to me that someone might be worried about this man who had left Yazd without notifying anyone.

Back in Yazd Ramazan told Amir that it was time for “his smoke.” Amir and I wondered what he had meant as he’d been smoking every chance he got during the day. When we arrived in the vicinity of his neighborhood in the old part of the city Ramazan confessed that he didn’t know his way home. “My grandson drives me to work everyday,” Amir translated, then looking into the rear view mirror, he told Ramazan, “I know the neighborhood fairly well. Give me some landmarks to go by and we’ll get you home.”

Ramazan slid forward on his seat, ducking his head to get a good look out the front windshield. All the while the weaver spewed out a string of mild curses, joking about his recent lack of memory. We drove past a park with plane trees and a colorful plastic jungle gym. Then down a wide street, alleys shooting off in all directions. They all looked the same. It was no wonder Ramazan couldn’t recall where he lived.

Amir took a wild guess and turned into an alley where he thought Ramazan might live and something jarred the weaver’s memory. He studied every motorbike we passed to see if he could find his grandson’s. After passing by a dozen, half-submerged, ancient doors, we came to a dead end. Fastened on the mud wall beside one of these doors was a silver and blue piece of metal that looked much like a license plate on a car. The number matched Ramazan’s home address. Ramazan raised his hand. We all slapped our palms together. “High fives!” Amir said, and laughed.

The weaver invited us to dinner, but not wanting him to go to the trouble or the expense we declined. However, we agreed to tea.

We entered a bare courtyard with stone flooring. The only sign of habitation was the earthen basin beneath a water spigot. A woman wearing a traditional chador ap- peared. Ramazan introduced his granddaughter Nahid to us, and soon after his grand- son Mohammad Reza arrived. The two were cousins. We sat on the floor in a cozy, two-room enclave furnished with Ramazan’s bed and a carpet.

“I have so enjoyed the time I have spent with your grandfather,” I said to Nahid as she set a match to the samovar.

“Would you like to take him home with you?” Amir translated.

“I’d love to,” I said, knowing already that this fellow weaver would forever be with me. “But you would miss him.”

“You are right,” Nahid said and offered us cookies Ramazan kept in a box beside his bed. The grandchildren lived in the adjoining homes and again we were invited to din- ner, but politely declined. I felt torn as I would have loved to spend more time with this family, but Amir and I both still felt like we shouldn’t accept.

“Then stay for a smoke,” Ramazan waved his hand, imploring Amir, myself and his grandson to sit with him around a small brazier in his back room. We all squeezed into the four-by-seven foot space, sitting cross-legged. Ramazan produced a huge, heavy wooden pipe that looked as if it were handed down to him from generations past. Surely it had emitted smoke into the starry nights of desert pilgrims.

Ramazan puffed on his pipe. A thick, pungent, very-not-tobacco scent soon clenched the air. It singed my lungs as it suffused my headscarf, hair and flowing beaded manteaux. My intuition suggested that maybe I should excuse myself, that I probably shouldn’t pass by the registration desk back at my hotel—located in a tiny alcove— smelling like this. It might raise eyebrows, as it flared nostrils.

I looked at Amir who sat shaking his head and smiling. “That’s not tobacco he’s smoking.”

As we departed, Ramazan put on his hat to show his grandchildren and I wondered would his memory of our day together outlast its knitted threads.

Ramazan and I met in a desert untouched by time or distance, a space devoted to finding gems in the gardens of others where we were told we’d find only stones. An expanse that allowed us to untie the knots that need not bind us.