Members of Congress Speak Out in Support of Belarus 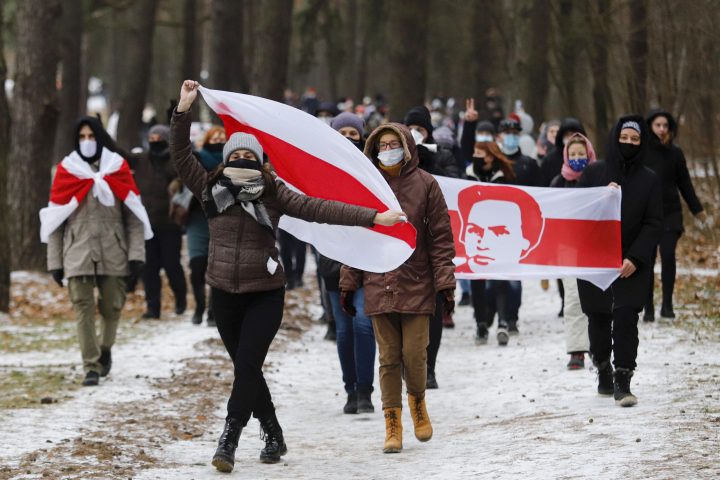 Demonstrators wearing face masks to help curb the spread of the coronavirus carry old Belarusian national flags during an opposition rally to protest the official presidential election results in Minsk, Belarus, December 13, 2020. Protests in Belarus have continued for almost four months after President Alexander Lukashenko won his sixth term in office in an election the opposition says was rigged. Photo by AP

Since Belarus’s fraudulent presidential elections in August of last year, tens of thousands of Belarusians have poured into the streets in protest, demanding a free and fair election and the immediate removal of long-time dictator Alexander Lukashenko. Belarusians have continued to demonstrate peacefully and in large numbers, despite thousands of arrests, the police’s escalating use of violence, and the exile of legitimately-elected President Sviatlana Tsikhanouskaya.

Cultural figures, in particular, have faced heightened risks since the election, with some 600 cases of rights violations against writers, artists, actors, singers, and public intellectuals over the last year. Among the targets of this cultural crackdown: our partners at PEN Belarus, whose secretary Hanna Komar, project manager Uldaz Liankevic, and members Siarzh Miadzvedzeu, Dmitry Strotsev, and Olga Shparaga, among others, were detained simply for exercising their right to freedom of expression.

In recognition of the International Day of Solidarity with Belarus on February 7, PEN America is sharing statements from members of the U.S. Congress expressing their support for the Belarusian people and reminding the world that the struggle for free expression and democracy in Belarus has not been forgotten. From across the nation and political spectrum, three senators and nine representatives join PEN America in expressing their commitment to supporting human rights in Belarus.

.@repdinatitus, a member of the Committee on Foreign Affairs, is standing up for #Belarus. She knows that we all have the right to choose our future; this #HumanRightsDay, let’s all call on the government of Belarus for change and freedom. #PressFreedom #EndImpunity pic.twitter.com/DYOzDXar4n

“My message to the people of Belarus is this: we see you, we hear you and we support your efforts to achieve a free and fair society,” said Rep. Dina Titus (D-NV).

.@RepGregoryMeeks, the incoming chair of the House Committee on Foreign Affairs, wants the people of Belarus to know that he will use his new role to work with Congress in support of their freedom. America stands for free and fair elections in #Belarus. #PressFreedom #EndImpunity pic.twitter.com/fBCD7qZ5YL

“Your sustained actions on the streets months after fraudulent elections, in the face of beatings and arrest, have inspired me. Believe me, it does not go unnoticed, even as we deal with our own domestic issues in America,” said Rep. Gregory Meeks (D-NY).

.@SenRubioPress joins @penamerica, @pen_belarus & other human rights organizations in calling for free & fair elections in #Belarus. He reminds the people of Belarus that, as they fight for their rights, they are not forgotten. They are not alone. #HumanRightsDay #PressFreedom pic.twitter.com/p9Dh63n711

“You are not alone. You are not forgotten. So many of us here in the United States and in Congress—we stand with you,” said Sen. Marco Rubio (R-FL).

As the Biden administration and the 117th Congress begin, PEN America urges government officials to consider how they might strengthen their support for Belarusians, including the “writers, reporters, academics, and above all, innocent protesters” whose persecution “is particularly concerning to those of us who cherish free and open debate” (Representative Steve Chabot, R-OH).

Thank you @RepSteveChabot for speaking out & sharing your “deep concern over the recent decision of Belarusian authorities to strip the accreditations of journalists covering widespread protests in Belarus in response to disputed election results.” #JournalismIsNotACrime #Belarus pic.twitter.com/Q1QFvaHda9

“It is part of what being a human being is, to have freedom and the opportunity to live in a non-censored and non-structured supervised world,” said Rep. Steve Cohen (D-TN).

.@RepCohen has been to #Belarus on multiple occasions. His memories of those visits account for just a few of the reasons why he supports the people of Belarus in their fight for democracy. Thank you for being one of 15 cosigners approving #hr8438 & voicing your support. pic.twitter.com/cm3nS2UGtD

“In a democracy, you value citizens participation and support civil society groups because their voices are essential. In a democracy, you don’t oppress free expression. I’ve been so impressed by the fortitude of Belarusians,” said Rep. David Trone (D-MD).

“The people of #Belarus have spoken, but their voices are being silenced.” Thank you @RepDavidTrone for joining the cause and standing up for human rights in Belarus. Congress must continue to stand up for human rights. #StandWithBelarus #BelarusProtest pic.twitter.com/2DTK5ub4FV

The plight of the Belarusian people “epitomizes the continuing struggle for self determination and freedom of speech, freedom of expression, and human dignity,” said Representative Jamie Raskin (D-MD).

“I want to take this opportunity to voice my support for the struggle of the Belarusian people, whose plight epitomizes the struggle for self determination, freedom of speech, and human dignity.” Thank you @RepRaskin for your vocal support of human rights in Belarus. pic.twitter.com/06EMnUcoUq

“As the government of Belarus strips free speech and fundamental human rights away from their own people, the United States Congress will not hesitate to hold the government to account, and to support the people of Belarus in their quest for a better future after a generation of Lukashenko rule,” said Sen. Ed Markey (D-MA).

“As the government of Belarus strips free speech and fundamental human rights away from their own people, the U.S. Congress will not hesitate to hold the government to account.” Thank you @SenMarkey for voicing support for Belarusians in their quest for a better future. pic.twitter.com/96kD8rNjBD

“Our message is your message. The voices of the Belarusian people must be heard. The crackdown on peaceful demonstrators must end. And all those who have been unjustly detained must be released,” said Rep. Bill Keating (D-MA).

Thank you @USRepKeating for holding the government of #Belarus accountable for repressing democracy and free expression. PEN America applauds your support of Belarusian protesters and the passing of the Belarus Democracy, Human Rights, and Sovereignty Act of 2020 #hr8438. pic.twitter.com/PdVgQnmwNW

“To the Belarusian protestors who have demanded that their voices be heard; to the women dressed in white who have formed long solidarity chains to protest police violence; to the employees at the state-run companies who have gone on strike despite the threat of losing their jobs; to the university students who have risked expulsion to join the protests; to the TV anchors who have walked offset, no longer able to support the regime’s propaganda; and to the thousands of pensioners who have marched in opposition to the Belarusian dictator, I want to say to you that you have not been forgotten and that you are not alone,” said Rep. Michael McCaul (R-TX).

.@RepMcCaul tells students, women, television anchors & others in #Belarus, who have risked their lives and livelihoods to protest, that America has not forgotten them. Indeed, we remember & support the people of Belarus fighting for freedom. #HumanRightsDay #PressFreedom pic.twitter.com/iR68pjzWwp

“We were deeply moved by [Svetlana Tikhanovskaya’s] determination to bring your country into the community of democracies. I welcome that effort. I’m going to continue to do everything I can in the United States to support your aspirations and hope,” said Senator Dick Durbin (D-IL).

“Please join me in calling on the government of Belarus to immediately release all those arbitrarily detained, to respect the right to peaceful assembly, and to assure independent, impartial, and thorough investigations of all allegations of torture and other human rights violations, including the deaths of at least four protestors,” said Rep. Jim McGovern (D-MA).

Standing up for #Belarus, @RepMcGovern argues that the best way to honor #HumanRightsDay is by supporting those who continue to fight for free speech, free expression, and fair elections. #PressFreedom #EndImpunity pic.twitter.com/Ik2Di5iUVS

Today, PEN America joins PEN Belarus, Members of Congress, and many others in expressing our solidarity with the people of Belarus, who are not alone in their struggle.

Sign our statement of solidarity with the people of Belarus »

The party of President Andrés Manuel López Obrador presented for public comment a proposed set of regulations on Twitter, Facebook, and other social media companies, a move that drew criticism Tuesday. https://bit.ly/3jD6wLH

Last year, we asked Grammy Award-winning writer
@lynellgeorge, to share three reading recommendations from Octavia Butler’s oeuvre, along with an excerpt from her own book on Butler’s life. Check out Lynell's recommendations here: https://bit.ly/2AWxADO. #BlackHistoryMonth