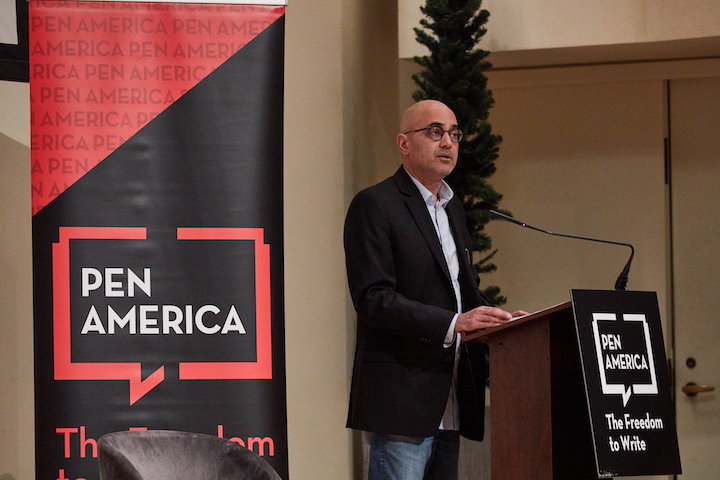 These remarks are adapted from Ayad Akhtar’s speech at PEN America’s event “Writers on Self-Censorship.” Watch the full event here »

We have a panel today addressing the matter of self-censorship, and before we get there, I’d like to say a few words in anticipation of what I expect to be a lively discussion.

It’s a complicated time, to say the least. There appears to be less and less commitment, among a greater contingent of us, to the bedrock value of freedom of expression. Increasingly, those who might otherwise have felt it important to defend free speech at all costs, have come to wonder if the so-called harm done by certain forms of speech are of greater significance than the so-called right to speak that could inflict such harm. An evolving set of beliefs about the kinds of harms we should no longer tolerate is creating, increasingly, its own political culture. And on the other side of this ever-deepening divide, we find a deeply cynical defense of freedom of speech, but really as something more like a revolt against what, I suspect many in this room, would see as the arc of history bending, finally, toward justice.

As writers, many of us are caught in the middle. Our creative imaginations are not discursive, but organic. We are pulled where the muses and where the fertile blindspots in our lives lead us. And so, the molting complexion of the public space—where language is increasingly politicized even when it’s not, where the argument over representation can feel increasingly like a matter of jurisprudence as opposed to creativity—the changing nature of the public space is not without consequence to us as writers.

In this year’s Philip Roth Lecture, subsequently published in this month’s Atlantic monthly, I laid out an involved case for what I suspect is a prime mover with regards to changing public discourse these days: engagement technology that has us addicted to the delivery devices where so much of our lives are now taking place. Surveillance capitalism, if you will, which has a fundamental principle: keeping us connected to the monetizing machine, and doing so by ceaselessly confirming our biases. I bring this up only to say that the incentives of online discourse have increasingly led to creation of groupings of opinion, pitted one against the other, agglomerations of outrage, not just left-leaning or right-leaning, groupings superintended by slogans of belonging and creedal statement honed, like trademarks, to the very locution. The result is a widespread and punitive stridency descending upon us from every quarter.

Part of the challenge of being a writer today, then, is not to be cowed by fear, however real, of opprobrium, retaliation, and group exclusion. The writer today must know that her best work is likely to come not from the pressing concern of our proliferating group think, but from a path that can only lead from her own sense of things. Attention paid to her own affinities, however heterodox they be. But in the end, any defense of the freedom to write, can only be as strong as those willing to heed it. Such strength, it’s important to add, is often not rewarded these days—a time when so many are telling us how and what and why we must write.

Just a few words in closing about the year we’ve had for the organization. The battle over the American classroom and what can be taught there rages, and we have been active in opposing any legislative action that limits what can and can’t be taught about our nation’s history. We continue to be focused on our initiatives across the country, in new chapter cities, and doing what we can to support local news in those communities. Our literary programs are flourishing, the annual awards, the World Voices Festival, and the PEN Out Loud series. The pandemic is of course still with us. And so, in addition to programming still finding its balance between online and in-person events, staff members at PEN America are also slowly reacclimatizing to an in-person environment that includes work from home as well.

Finally, this promises to be an important year for us: Poised to celebrate our 100th anniversary, I’m thrilled to announce we’ve received a transformative gift of $10 million from the Edwin Barbey Charitable Trust to establish the PEN/Barbey Freedom to Write Center—which will enhance our ability to work worldwide to defend free expression. And finally, our Prison and Justice Writing Program is anticipating the release next month of a 350-page publication entitled The Sentences that Create Us: Crafting a Writer’s Life in Prison. Thanks to a grant from the Mellon Foundation, we will be donating 75,000 copies of the book to prison libraries nationwide.

Thank you for being here tonight. Please refer your literary friends, your reading friends, for Membership. Thanks for your commitment and for reminding us, through all your accomplishments as writers, why we do what we do.