Against the Ruins of 9/11 21 Years Ago, Salman Rushdie Appealed to New Yorkers: “Don’t Let Fear Rule Your Life” 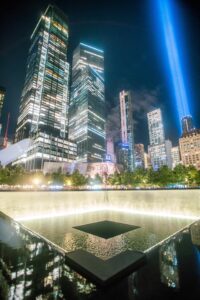 His Words Opened an Enduring Path to Cross-Cultural Dialogue

(NEW YORK)—What has changed as a result of the 9/11 attacks? This has been an unceasing point for debate and discussion since that deadly day 21 years ago. As we pause to remember the 2,977 lives that were taken, we might also ask: How did we hold onto the things that mattered?

In the immediate shock, horror, and sorrow following the attacks on New York, Washington, and the crash of a doomed plane in Pennsylvania, predictions that life would never be the same were heard over and over, as repetitive as the televised images of the towers turning to dust. Some of what commentators foresaw turned out to be nonsense while developments no one could have imagined unfolded and set us back on our heels. One foreign policy analyst looked back on the 20th anniversary and saw a straight line from the “firehose of misinformation” after the attacks to the rise of white nationalism and Donald Trump. Another said that at least for now, the post-9/11 conflicts in Iraq and Afghanistan had severed the U.S. will to entangle itself in conflicts abroad.

The geopolitical uncertainty will continue but as we look back we can see more clearly how life was altered and what we held onto with an even firmer grasp.

In the weeks and months that followed the attacks, one voice appealed to us to elevate our thinking and use this “dreadful blow,” to create not barriers that isolate and weigh us down with suspicion, but open channels for communicating across borders.

That voice was Salman Rushdie, at the time a new and ardent New Yorker who had settled here after a decade of forced seclusion in the U.K. following an Iranian theocrat’s 1989 fatwa. Ayatollah Khomeini marked Rushdie for death over a fictional dream sequence in his book, The Satanic Verses, which some Muslims considered blasphemy. This August, Rushdie was viciously stabbed as he took the stage in upstate New York to talk about persecuted writers in peril worldwide, a topic that has motivated him for decades as a champion for free expression and writers, intellectuals and thinkers across the globe. His attacker was an American sympathizer of Shia extremism. Rushdie is still recovering from grievous wounds but why do we think his injury will not silence him? Because against all odds, Rushdie has always persisted.

A little over a month after the 9/11 attacks, Rushdie in The Guardian wrote of that resolve: “To this bright capital of the visible, the forces of invisibility have dealt a dreadful blow. No need to say how dreadful; we all saw it, are all changed by it. Now we must ensure that the wound is not mortal, that the world of what is seen triumphs over what is cloaked, what is perceptible only through the effects of its awful deeds.”

The headline captured the spirit he sought to encourage: “Let’s Get Back to Life.” He urged New Yorkers to do just that.

“The fundamentalist believes that we believe in nothing,” he wrote. “In his world-view, he has his absolute certainties, while we are sunk in sybaritic indulgences. To prove him wrong, we must first know that he is wrong. We must agree on what matters: kissing in public places, bacon sandwiches, disagreement, cutting-edge fashion, literature, generosity, water, a more equitable distribution of the world’s resources, movies, music, freedom of thought, beauty, love. These will be our weapons. Not by making war, but by the unafraid way we choose to live shall we defeat them. How to defeat terrorism? Don’t be terrorised. Don’t let fear rule your life. Even if you are scared.”

Few who lived through the aftermath sensed then that life would inevitably return to normal. Though it did.

In Rushdie’s eloquent writings were the beginnings of a world-changing idea to inspire the dialogue across borders to prevent events like the 9/11 attacks from holding us apart out of fear and suspicion.

The idea was to uplift the “beating heart of the visible world,” as Rushdie described New York City, and ensure dialogue would continue between the United States and the rest of the world through the voices of writers. Every spring since, the festival has gathered international writers to share new ideas and writing with American authors and the reading public, always with a focus on the most pressing issues of our time and the power of literature to help us navigate these concerns.

In 2015, looking back at that first  festival, Rushdie told The New York Times: “We felt that that kind of distance between America and the world was not good for America, and not good for the rest of the world either.”

PEN America CEO Suzanne Nossel noted: “It’s not about trying to hammer out an agreement or settle differences necessarily. But rather using literature and dialogue as a way to shift perspective, spark new ideas and ways of thinking.”

This past spring, as part of the festival, PEN America brought 80 novelists, playwrights, poets, essayists, and journalists from 30 countries to the United Nations for an “Emergency World Congress of Writers” to consider the question: Can the power of the written word meaningfully bring about change in a world threatened by cascading crises and catastrophic events? The gathering included a delegation from Ukraine, in the early months of the war.

Rushdie was among them and his comments galvanized the assembly: that writers have an essential role as truth-tellers against the many threats to the planet, justice, and democracy.

“A poem will not stop a bullet,” he said. “A novel cannot defuse a bomb. But writers can still sing the truth and name the lies. We must work to overturn the false narratives of tyrants, populists, and fools by telling better stories than they do—stories within which people might actually want to live.”

As a tireless advocate for international dialogue and the necessity of challenging threats to free expression, Rushdie has lived by the rule that the silencing and persecution of writers, intellectuals, and artists demands that we speak on their behalf, whether they are from China, Iran, Myanmar or Saudi Arabia, and that we do so in dialogue with others.

His impulse to face and expose distorting truths continues to inspire the rest of us to do the same. His words restore us, then and now.