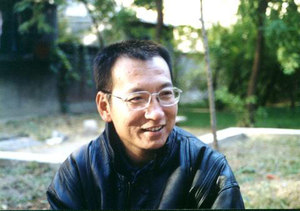 Liu Xiaobo, a renowned literary critic, writer, political activist, and 2010 Nobel Peace Prize laureate, was formally arrested in 2009 and charged with “inciting subversion of state power,” and sentenced in 2010 to 11 years in prison for penning seven sentences. His wife, Liu Xia, has been under house arrest since the announcement that he would be awarded the 2010 Nobel Peace Prize.

Liu Xiaobo was formally moved to Jinzhou Prison in Liaoning, his home province, on May 24, 2010. On June 26, 2017—with about three years left in his prison sentence—Chinese authorities transferred Liu to a nearby hospital on medical parole for late stage liver cancer, where he remained under guard. Liu Xiaobo died in Liaoning on July 13, 2017. He was 61.

Liu Xiaobo was a renowned literary critic, writer, and political activist. He served as president of the Independent Chinese PEN Center (ICPC) from 2003 to 2007 and then served as an honorary president. He was a professor at Beijing Normal University and was a visiting scholar at several universities outside of China, including the University of Oslo, the University of Hawaii, and Columbia University in New York City. Liu Xiaobo was the winner of the 2009 PEN/Barbara Goldsmith Freedom to Write Award and the 2010 Nobel Peace Prize.

2017: Liu Xiaobo is diagnosed with liver cancer in late May, 2017. On June 23, Liu Xiaobo is released on medical parole to a hospital in Shenyang, Liaoning province. Three days later, the Liaoning Prison Bureau Administration confirms his hospitalization on its website, stating that Liu is being treated by eight people it described as “well-known tumor specialists.” Shang Baojun, one of Liu’s lawyers, notes the severity of the cancer, saying, “If it was an early stage of cancer, then that would be easier to treat. But at this late stage, the treatment seems much more difficult.” Another lawyer, Mo Shaoping, states that Liu has been allowed to see family—including his wife Liu Xia, a poet and ICPC Member who was placed under house arrest following the Nobel announcement in 2010. He remains under guard and other visitors are restricted from seeing him. On July 13, Liu Xiaobo dies in Liaoning, at the age of 61.

2013: In November Liu Xia files a second appeal for Liu Xiaobo’s retrial. Liu Xiaobo is represented by prominent human rights lawyer Mo Shaoping, who states that the retrial is about “a citizen’s right to freedom of speech and expression.” In Beijing, courts have discretion as to whether to grant a retrial, so this appeal does not guarantee a review of Liu Xiaobo’s case. Liu Xia remains under house arrest, despite never being charged with a crime.

2010: On Februrary 11, 2010, the Beijing High Court rejects Liu Xiaobo’s appeal. On October 8, Liu Xiaobo is awarded the Nobel Peace Prize. Unable to attend the Nobel ceremony in Oslo, he is poignantly represented by an empty chair. When told of the announcement, he wept and told his wife, Liu Xia, that it is dedicated to the martyrs of Tiananmen. Liu Xia has been under house arrest since the award announcement.

December 2009: Liu Xiaobo is tried by the Beijing No. 1 Intermediate People’s Court on December 23, 2009, and pleads not guilty to the charge of “inciting subversion of state power” for co-authoring Charter 08. The trial lasts less than three hours, and the defense is not permitted to present evidence. Two days later, on December 25, Liu Xiaobo is sentenced to 11 years in prison and two years’ deprivation of political rights.

2008: Before the formal release of Charter 08—a declaration calling for political reform, greater human rights, and an end to one-party rule in China—police arrive at the Beijing homes of Liu Xiaobo and fellow activist Zhang Zuhua. At 11 p.m. that night, they take both men away and search their homes, confiscating computers and other materials. Liu’s arrest occurs during a period of several sensitive anniversaries, including the 100-year anniversary of the promulgation of China’s first constitution, the 60-year anniversary of the adoption of the Universal Declaration of Human Rights, and the 30-year anniversary of Beijing’s “Democracy Wall” movement. While Zhang Zuhua is released the following morning, Liu Xiaobo remains in detention. He is held incommunicado until December 31, when he is finally permitted a visit from his wife. He is denied access to a lawyer and writing materials while detained at the No. 1 Detention Center of Beijing City.

After Liu Xiaobo’s arrest, nearly all of the 300 original signatories of Charter 08 are interrogated in a push to gather evidence against him and crack down on free expression in China.

2004: Liu Xiaobo’s phone lines and internet connection are cut after the release of his essay criticizing the use of “subversion” charges to silence journalists and activists, and he is subsequently the target of regular police surveillance and harassment.

1989: Liu Xiaobo leaves his teaching post at Columbia University and returns to Beijing to play a crucial role in spreading the pro-democracy movement, staging a hunger strike in Tiananmen Square in support of the students and leading calls for a truly broad-based, sustainable democratic movement. He is instrumental in preventing further bloodshed in the Square by calling for nonviolence on the part of the students. He spends two years in prison for his role and another three years of “reeducation through labor” in 1996 for publicly questioning the role of the single-party system and calling for dialogue between the Chinese government and the Dalai Lama of Tibet.

In recent years, addressing the dire situation for free expression in China has been one of PEN America’s signature campaigns. With the world’s largest population, and with increased economic and political heft, China’s extensive censorship apparatus limits speech both within and outside its borders. Although new digital platforms have expanded the means of expression, they have also provided more opportunities for repression: in China, even a simple Tweet can land its author in jail. Since President Xi Jinping took office in early 2013, he has overseen an extensive crackdown on free speech, implementing additional laws and censorship controls on the Internet, media, and publishers. In addition, individual Chinese writers, journalists, and creative artists have been censored, harassed, imprisoned, and even disappeared after they speak out about sensitive topics such as the rights of ethnic and religious minorities, corruption, and the lack of democratic reform. Several dozen are currently behind bars because of their writings or creative expression. Read more about freedom of expression in China here.

“In order to exercise the right to freedom of speech conferred by the Constitution, one should fulfill the social responsibility of a Chinese citizen. There is nothing criminal in anything I have done. [But] if charges are brought against me because of this, I have no complaints,”—Liu Xiaobo, “I Have No Enemies: My Final Statement”

The Internet is God’s Present to China

Four Poems: One Letter is Enough, Longing to Escape, A Small Rat in Prison, and Daybreak

Authoritarianism in the Light of the Olympic Flame

Flood the Gates: Write to Liu Xia and Liu Xiaobo

On the Fifth Anniversary of Liu Xiaobo’s Arrest, Grave Concerns for Liu Xia

Liu Xia: To Feel a Life in This Prison

On the Anniversary of Liu Xiaobo’s Arrest

The Silent Strength of Liu Xia

PEN to Liu Xiaobo: You Are Not Forgotten

Success and Silence in Today’s China

More than Six Months on, Liu Xiaobo Remains in Detention

We heard many horrifying stories as we researched our new report on cultural erasure in #Ukraine. But the one that sticks with me is the Lozova Palace of Culture.