On the Anniversary of Liu Xiaobo’s Arrest 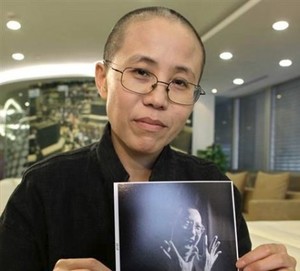 It was disappointing to watch Mo Yan gloss over China’s systematic censorship—censorship he has had to navigate throughout his career—during his official Nobel Prize lecture today in Stockholm. It was even more discouraging that, in an interview yesterday, he compared that censorship offhandedly to airport security: it, too, is for the people’s protection and security, he suggested.

As the AP reported, Mo Yan explained is position this way:

Mo said he doesn’t feel that censorship should stand in the way of truth but that any defamation, or rumors, ‘‘should be censored.’’

‘‘But I also hope that censorship, per se, should have the highest principle,’’ he said in comments translated by an interpreter from Chinese into English.

What is amazing, really, is how few of Mo Yan’s fellow citizens today share this benevolent view of censorship. They know too well that in the name of deterring rumors and defamation, China’s censors are really just busy trying to block uncomfortable truths—truths about official mismanagement and corruption, about potentially destabilizing social inequities and injustices, and about its ongoing human rights abuses. There is nothing high-minded about the principles that drive the decisions about what China’s citizens can read about their world on the Internet, any more than high principles were at play when authorities literally tried to bury carriages from a doomed high-speed passenger train to prevent a forensic investigation of the accident. In that case, and in countless others since then, Chinese citizens refused to allow the human reality of a tragedy to be buried in order to protect official reputations.

One of the truths the Chinese Communist Party most energetically works to erase is its human rights record, and especially its treatment of those who question the party’s monolithic hold on power. Yesterday, as one AP reporter was covering Mo Yan’s press conference in Stockholm, two other intrepid AP reporters managed to give the world a startling glimpse of the human face of China’s increasingly vindictive suppression of its leading dissident voices.

The face is of poet and artist Liu Xia, who, with her husband Liu Xiaobo, was one of the founding members of the Independent Chinese PEN Center. The glimpse is in a video interview that the two reporters, Isolda Morillo and Alexa Olesen, recorded in her Beijing apartment. As we reported yesterday in this press release,

The video, shot by AP reporters who managed to penetrate the network of guards and surveillance that has kept Liu Xia cut off from the world for more than two years, shows a shaken and at times overwhelmed figure who at first cannot believe she is face to face with visitors. During the subsequent interview, Liu Xia reveals that she was barred from visiting Liu Xiaobo in prison for a year after the announcement, and that now she is allowed to make the trek to Jinzhou Prison, some 280 miles away, once a month. Still deprived of phone and Internet, she remains cut off from the outside world but for weekly visits with her parents and trips to buy groceries.

“I felt I was a person emotionally prepared to respond to the consequences of Liu Xiaobo winning the prize,” she told the reporters. “But I really never imagined that after he won the prize, I would not be able to leave my home. This is too absurd. I think Kafka could not have written anything more absurd and unbelievable than this.”

Liu Xiaobo was detained four years ago tomorrow, two days before Charter 08, the document he had helped craft that calls for greater political and human rights in China, was due to be released. That document, and any mention of it, is still banned in both traditional and digital media, and Liu Xiaobo is serving an 11-year sentence for “inciting subversion of state power” for his writing.

Monday is International Human Rights Day. Monday also marks the second anniversary of the day Liu Xiaobo was honored in absentia with the Nobel Peace Prize. PEN is observing the occasion with a host of international actions on Liu Xia’s and Liu Xiaobo’s behalf. A number of PEN’s most prominent voices, including PEN American Center members Salman Rushdie, Paul Auster, and Kwame Anthony Appiah, have contributed recordings for this wonderful campaign PEN International is coordinating with Frontline Defenders. Our colleagues throughout Europe have been pressing representatives of their countries who will be accepting this year’s Nobel Peace Prize on behalf of the European Union to use the occasion to remember Liu Xiaobo and press his case. And we are urging everyone to take a few moments just to watch yesterday’s extraordinary interview with Liu Xia.

In his interview yesterday in Stockholm, Mo Yan skirted the question of Liu Xiaobo’s fate. The AP reported that he asked his audience not to press him on the subject, saying “On the same evening of my winning the prize, I already expressed my opinion, and you can get online to make a search.”

It’s true: we can do a Google search, for example, and find this encouraging Guardian piece, titled “Nobel winner Mo Yan speaks up for jailed ‘subversive’ Liu Xiaobo.”

Mo Yan’s fellow citizens, however, are barred from using Google, and with Liu Xiaobo’s name banned in the country, it is unlikely that any search in China would pull up the article.