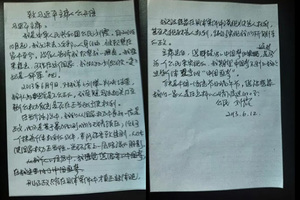 On June 12, 2013, Liu Xia, under house arrest since her husband Liu Xiaobo won the Nobel Peace Prize in October 2010, penned an open letter to Chinese President Xi Jinping. It was smuggled out and released to the public today. Translation by Friends of Liu Xiaobo.

I am Liu Xia, a citizen of the People’s Republic of China. I have been under house arrest and have lost all my personal freedoms since October 2010. No one has told me any reasons for detaining me. I have thought about it over and over. Perhaps in this country it’s a “crime” for me to be Liu Xiaobo’s wife.

I think the prison sentence of my brother Liu Hui, which was handed down on June 9, 2013, is totally unjust. I doubt whether the judicial authorites and even the whole public power system were really administering their rights properly.

Under the current rule of law, we should see justice in state power, instead of ruthless crackdowns with violence; any events that erase individual rights will all cause tragedy, thus casting a dark shadow over the aura of the state power’s legitimacy.

Justice in criminal cases will only be manifested in actual cases. I cannot imagine justice, which is what we’re hoping for, would be realized through disrespecting and even disregarding the rights of the accused.

Mr. Chairman, the China Dream that you mentioned will have to be realized through every citizen. I hope the China Dream won’t turn us individuals into the “China Nightmares.”

Today is the traditional Chinese Duanwu Festival (Dragon Boat Festival). Can you ever imagine how our family is feeling during the celebrations?

Linfield University Fires Professor Who Spoke Out Against Sexual Misconduct

"It’s still not easy to discover the gems out there because of uneven or negligible media coverage." This #APAHeritageMonth, revisit our #PENTen interview with @jennybhatt about what inspired her to begin the @DesiBooks podcast & more. https://bit.ly/3xMZlHf

Facebook is obligated to respond to the @OversightBoard’s recommendations publicly. It should go beyond that, and we must hold it accountable for meaningful and transparent action. Our analysis of today's decision. https://bit.ly/3eTUyeB

A tenured professor in Oregon fired without cause. Administrators seem to be taking drastic steps to curtail free expression on the Linfield campus. https://bit.ly/2SlvvcE