Success and Silence in Today’s China 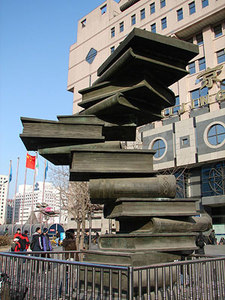 Last week, a small group of representatives from PEN American Center and PEN International visited Beijing and Hong Kong, hoping to learn more about the situation for writers and freedom of expression in China since Liu Xiaobo was awarded the Nobel Peace Prize last December. Our goals were simple: We wanted to meet and talk with colleagues, especially members of the Independent Chinese PEN Center (ICPC), which Liu Xiaobo helped establish 10 years ago; to underscore the seriousness of our commitment to seeing that Liu Xiaobo and all other writers, journalists, and bloggers imprisoned in China (including three other members of the Independent Chinese PEN Center) are released; and to visit with a wide range of writers, readers, and supporters of literature to learn more about the conditions that prevail in China.

During our visit, the U.S. Embassy in Beijing generously hosted a roundtable discussion on freedom of expression in China, and invited 14 of our colleagues who have first-hand or personal experience with some of the severe restrictions imposed on what is supposed to be, under both Chinese and international law, a fundamental right.

To our deep disappointment, only three were able to attend. Many of the other invitees were visited the day before by the guobao, China’s internal security police, and told not to attend.

That was on Wednesday. The trend continued the following day, when journalist Dai Qing and a friend were warned not to accept our invitation to breakfast—an invitation that, like the embassy event, the police could only have known of through surveillance of personal communications.

Furthermore, ongoing house arrest and forced isolation prevented us from seeing some of the colleagues we most wanted to visit—Liu Xia, Liu Xiaobo’s wife, who I had the honor of meeting when I was in Beijing last year, and Teng Biao and Ye Du, two fellow PEN members who were targeted in the crackdown this past February.

The enforced silence in which they are now living is spreading throughout the literary community: we visited a bookstore whose owner was beaten late last year and one whose owners were told in March they could no longer host literary events and readings. Both, in better times bustling centers for literary culture, were hauntingly empty. Indeed, it was clear that extreme efforts are being made to isolate writers and readers from one another. It is this forced isolation that is most offensive to PEN, whose founding purpose was to promote an open exchange of literature and ideas among writers.

We did, fortunately, get to meet with several writers, some who are dissidents and activists and some emphatically not. These were wonderful exchanges, and we’re very grateful to them for their time and for their insights. During our conversations, all of them made clear that they face restrictions that harm their abilities to realize their talents and produce or publish their best work.

To anyone visiting China today, it is obvious the country is experiencing great successes. It is also very clear that there are considerable anxieties and stresses. Unfortunately, all of the writers we spoke with expressed frustration that they are restrained from fully exploring these realities. There are important and great stories to be told in China today. So much time and talent is being wasted trying to rein in voices, and stories, that China and the world need to hear.