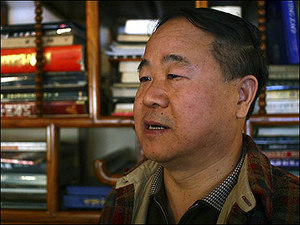 When the Swedish Academy called the Chinese writer Mo Yan to tell him he had won this year’s Nobel Prize in Literature, the novelist reportedly told them, in what must be one of the most poignant Nobel reactions in memory, that he was “overjoyed and terrified.”

It isn’t hard to imagine why a writer who chose “Mo Yan” as his pen name would find fear at the heart of such a happy occasion. The name, meaning “don’t speak,” was his parents’ admonition when they sent him out to play in the Maoist 1950s and ’60s. Half a century later, Mao’s party, stripped of ideology but intact in its machinery, remains in charge, and at least 40 of Mo Yan’s less circumspect contemporaries are locked in Chinese prisons.

As a novelist, Mo Yan has dipped his toe in the waters of official taboos, but he also has credited state censorship with spawning the formal innovations that helped garner him the Nobel Prize last week. And throughout his life he has done little to jeopardize his status as one of the country’s most honored writers; he is currently vice chairman of the state-run Chinese Writers Association.

In 2009, when the People’s Republic of China was the official guest of honor at the Frankfurt Book Fair, Mo Yan was part of a delegation that boycotted events that included Chinese dissident writers. More recently, he was one of around 100 writers to pay tribute to Mao by hand-copying a passage from Mao’s 1942 Yan’an talk on literature and art — a speech that the dissident Liu Binyan once described as boiling down to the injunction “Writers should ‘extol the bright side of life’ and ‘not expose’ the darkness.”

There is plenty of darkness and humor in Mo Yan’s novels, even violence, but despite his wildly imaginative, folkloric style, much remains unexamined. And where there is silence, there is fear: fear of trespassing official boundaries, on one hand; fear of being called to account for one’s reticence on the other. When the Nobel Prize was announced, Mo Yan must have found himself trapped in the terrifying space between these two fears.

Compare that with the reaction of the critic and poet Liu Xiaobo, who was awarded the Nobel Peace Prize two years ago. In his prison cell in northeast China, where he is serving an 11-year sentence for “inciting subversion of state power” in his writings, Mr. Liu reportedly wept at the news and asked his wife to tell the world that he was dedicating the prize to the victims of the 1989 Tiananmen Square massacre.

That massacre remains one of the Chinese Communist Party’s greatest taboos. And with good reason: nothing so clearly illustrates the party’s heartless willingness to trample the rights—and if necessary, sacrifice the lives—of its citizens to maintain its monopoly on power. “Beneath the forgetting and the terror/this day’s been buried,” Mr. Liu laments in his collection “June Fourth Elegies,” a series of 20 poems he has written to commemorate the anniversaries of the massacre.

For Mr. Liu, who long ago accepted the risk of imprisonment and reality of life as a dissident writer, official taboos fall before the duty to remember:

In memory and bravery this day lives forever

It is an immortal stone and though stone,

and though wild grass, it can take flight

The blade-tip that pierces the heart’s center drips

with the blood of snowbright memory

It is hard to imagine Mo Yan speaking out about the horrors of Tiananmen, even now that he is fortified—and burdened—by the Nobel Prize. But last Friday, Mr. Liu’s colleagues and friends were heartened when Mo Yan, who had previously pleaded ignorance of his countryman’s case, told reporters that he hoped that Mr. Liu “can achieve his freedom as soon as possible” and that he should be free to research his “politics and social system.”

That same day, Reporters Without Borders released a clandestine video of Liu Xia, Liu Xiaobo’s wife, smoking a cigarette at the window of the Beijing apartment where she has been held incommunicado for the past two years. The video was taken at night, with the sound of chirping crickets in the background. It was the first glimpse the world has had of Liu Xia since the Nobel Committee announced it was honoring her husband with the Peace Prize, and surfacing in the midst of this year’s literature announcement, the effect was jarring and eerie: it was almost as though, by breaking his silence on Liu Xiaobo, Mo Yan himself had summoned an image of the couple’s suffering to mind.

Mo Yan didn’t conjure Liu Xia, of course. We have her image thanks to an anonymous videographer who refused to forget her. It’s an image that stands as a challenge to all writers: yes, we can ignore her and still create literature. We just can’t ignore her and have peace.