Liu Xia: To Feel a Life in This Prison 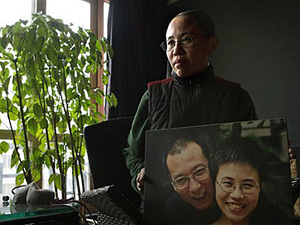 On the eve of Vice President Joe Biden’s visit to Beijing, PEN American Center, along with Human Rights Watch and Amnesty International, USA, issued a public letter asking him to pressure his counterparts to release imprisoned Nobel Peace Prize Laureate Liu Xiaobo and his wife, Liu Xia. Liu Xiaobo is serving an 11-year prison sentence on subversion charges for writing seven sentences. Liu Xia, a poet and artist, has been held incommunicado under house arrest for more than three years without being charged.

In a rare appearance in May 2013 outside a courtroom where her brother, Liu Hui, was being tried on trumped up fraud charges, Liu Xia told the world that “If they tell you I’m free, tell them I’m not free.” She has been held in her Beijing apartment without access to phones, Internet, doctors of her choice, or visitors since Liu Xiaobo was named the winner of the Nobel Peace Prize in October 2010. As the third anniversary of Liu Xiaobo’s Nobel Peace Prize ceremony approaches, security appears to be tightening around her. The press is reporting this week that she is suffering from severe depression:

Hao Jian, who teaches at the Beijing Film Academy and is a friend of Liu, said a friend had seen Liu two days ago wordlessly weeping as she stood at a window in her flat.

“Based on our observations, it is getting more and more serious,” Hao said. “Before, she could speak, but now she can’t say anything.”

In a July letter that the New York Times recently obtained, Liu Xia said that “Living in almost total isolation, I find the road before me populated by countless books. I hide among the books and meander in the world.”

While we can’t break her isolation, we can share her words with the world. PEN is proud to release two newly translated poems by Liu Xia. “June 2nd, 1989,” and “Rant” were translated by Jennifer Stern and Ming Di. We hope that Vice President Biden will read these, and that they will allow him and others to meander in her world.

Yes, the Chinese government continues to say that Liu Xia is not a prisoner. The evidence points to the contrary. Take action now.