2014 World Cup Beyond the Headlines 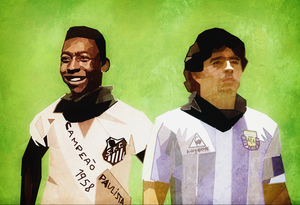 The group stages of the World Cup are largely considered boring affairs in which fans get a glimpse of the more exciting matches to come during the knock-out period, when every game makes the difference between continuing in the tournament or returning home early. Not so at this World Cup. Three giants of world soccer have exited: Spain, Italy, and England. And the world has been transfixed by replays and clever photo composites of Uruguay striker Luis Suarez biting everything from cupcakes to ship captains as a shark after he bit Italy defender Giorgio Chiellini. South African cartoonist Zapiro, who has himself been threatened for his cartoons multiple times, lampooned FIFA’s treatment of Suarez here.

For the first time since 1986, the tournament falls during Ramadan, prompting questions amongst Muslim players about whether to observe the holiday or not. The Kuwaiti team famously chose to observe Ramadan in its final group match against England in 1982, but the coach noted that it only affected its performance “a little bit.”

But beyond the headlines, there are stories on free expression and human rights at the Cup and in its contending teams’ home nations. Three people were arrested in Iran for their role in making a video that supported the national soccer team. FIFA declined to sanction fans from the Mexico national team after allegedly chanting homophobic slurs during their march to the second round. And because ttending games in person has sadly remained impossible for most Brazilians, Football Beyond Borders organized a Favela World Cup to invite members of shantytowns to form their own games. Similarly, the town of Östersund, Sweden, hosted a tournament for countries that don’t exist, such as Padania, Tamil Eelam, and Occitania. PEN Haiti President Jean-Euphèle Milcé told us in an interview that, since Haiti isn’t in the World Cup, his favorite team would be a combination of three countries that respect journalists: France, Germany, and Holland.

For those of you utilizing the service Aereo in the U.S. to stream the matches, you are now out of luck: the U.S. Supreme Court ruled that the technology employed by Aereo infringes upon copyright. You’re luckier if you have been watching the tournament on your mobile phone, because the same court held that authorities now require a warrant to search your device.  But don’t get too excited. The activist research team at Citizen Lab released this frightening paper about how government authorities around the world have been stealing data from your mobile phone using software developed by the Italian firm Hacking Team.

We’ll bring you more news beyond the headlines from the quarterfinals over the next few days.