Voices from Ukraine and Belarus Part I 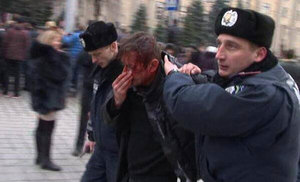 Last month, Serhii Zhadan, one of the best and most well known poets in Ukraine was beaten up during the civil unrest in Kharkiv. He has since recovered and was able to join my online conversation. Here, he is joined by Iryna Shuvalova, a wonderful young Ukrainian poet, translator and anthologist, as well as Andrei Khadanovich from Belarus, author of eight books and translator from several languages into Belorussian, and Valzhyna Mort, a Belorussian poet who also writes in English and is generally considered one of the best younger poets at work in the world today.

Since my last post, Crimea has been annexed. The Russian army continues amassing on Ukrainian borders. Many more oligarch and robber-barons have been appointed to new positions of power in Ukrainian government. Russian war-planes have been stationed in Belarus, a neighbor to both Russia and Ukraine, where Aleksandr Lukashenko, has ruled with a dictator-like approach for two decades. Throughout eastern Ukraine several cities have seen various forms of civil unrest.

As Americans are flooded by the news and propaganda, it may be a good idea to listen to poets from the region. What do they say about poetry from Eastern Europe? How is it different from Western Europe? How do they see their landscape? What is the place of a poet in the time of unrest? This month, I want to introduce a roundtable conversation of poets from the region. Because the turn of events and political situation in Ukraine will—no doubt—affect Belarus as well, two poets from that country are also featured here.

On Politics & Poetry, Place of a Poet in a time of Civil Unrest

Serhiy Zhadan (Ukraine) A poet doesn’t owe anything to anybody. But a poet, like any other citizen might happen to have a civic position. I’ll tell you this—I’ve always been interested in poets with such a position. And when we say that contemporary American poets aren’t involved in their country’s politics, we forget that just 40-50 years ago it was completely different. I’m talking about 60-70’s when most American poets, artist, and musicians were very active on the political scene. I think there are times when it’s simply criminal to stay at the writing desk and pretend that nothing is happening outside your window. It’s at least not fair. Today Ukraine is going through such times.

Iryna Shuvalova (Ukraine) A poet is always a voice. Sometimes a person behind that voice is more visible and pronounced, while at other times the speaker blends into the background, letting the voice soar.

I believe, wartime is the time of a poet’s ultimate visibility. At the time of war one cannot speak from nowhere—from an ephemeral dimension, from a dreamland. When a war is taking place, a voice has to come from a certain place: particular, defined. A poet’s voice also transcends its purely personal qualities, suddenly becoming necessarily a voice of a nation, a voice of a country, a voice of a certain group of people (even if through a denial of it).

A poet behind the voice suddenly stands out, whether they want it or not, with their legs firmly rooted, not in the clouds, but in the dirt. And they have no choice but to speak from there, because even their silence in a wartime becomes speech.

Andrei Khadanovich (Belarus) Nobody has yet cancelled Joseph Brodsky’s formula that a poet shouldn’t interfere with politics, unless politics interfers with a poet. In the authoritarian Belarus there are all kinds of issues with human freedoms, there’s censorship and «black lists,» which include the best writers and musicians; there’s a great degree of discrimination against people speaking Belarusian. This is to say that our politics does interfer with our poets.

Most often a poet, as a citizen, has a political position. Some people let this position be visible in their work while others don’t. Of course for those who do, there’s always a trap of failing to distinguish between creativity and journalism. But there are many cases when an artist has enough talent to turn a political statement into artistic.

A couple of weeks ago, my collegues and I organized readings in solidarity with Ukraine. I was very surprised because authors who showed up were drastically different, politically and aesthetically. I couldn’t image circumstances that would bring them together until then. Our younger poets are constantly translating their Ukranian collegues. Most often, Serhij Zhadan.

Valzhyna Mort (Belarus and USA) Andrej mentions the trap of falling into journalism… I think a poem is a trap every time. If you are not falling into journalism, you are falling into a tree-outside-my-window poem, an I’m-mortal poem, I-cannot-tell-an-anecdote-from-a-poem poem.. Every subject has its own formulas and traps, lack of subject being the quickest one. When I read somebody like Osip Mandelshtam, for instance, I experience familiar language crammed into lines so tightly until familiar shapes vanish, and new, strange relationships are formed, and the music of these relationships becomes a language of its own, that is the language of poetry. The subject of these poems is often a newspaper article Mandelshtam read that day—he is a careful reader of newspapers, following political news very closely, and responding to the language of this news with poetry. Is Mandelshtam, sometimes, a political poet? No, simply because there’s no such a beast as a political poet. «A political poet» can only be used as a metaphor for, say, the Minister of National Propoganda. In this sense we can say that Joseph Goebbels was a political poet. An actual poet like Mandelshtam responds to his reality with images, with verbal music, and that reality is often a very politicized reality, especially if the poet chooses to see beyond the tree outside his window. This doesn’t give us a political poem though. It gives us a poem that is in tune with a historical moment. An artist (I’m talking about a real artist) turns politics into history. Or let’s take Anna Swir. What is her language if not the language of journalistic notes? Perhaps even more bare – a language of photography. She is recording her experiences with these verbal photographs that rarely excede six-eight lines. It took her thirty years to start writing about her World War II experience. She couldn’t find a proper form, a proper language. The urge is to talk to a political situation in the language of politics, to respond to it on its (political) terms. That’s a great misstep. One has to always find a new, and always poetic language of talking about whatever it is, politics, love, or a gas station.

Iryna Shuvalova (Ukraine) My relationship with Ukraine’s tradition? It’s a love-hate relationship, really. In a sense, we are still constructing our canon, while simultaneously deconstructing it.

The construction process seems to be needed, because we have been denied a canon for so long, being defined as the people writing in a not-quite-language. When this canon was finally allowed into existence, it was only in a perverse form of a very simplified construction, heavily censored by our colonizers—the Soviet regime. As a part of the USSR, Ukraine, just as the rest of the Soviet republics, was allowed to stand out just enough to possess a certain exotic charm, but also in a way that would clearly demonstrate its inferiority or incompleteness outside of the colonial structure. This had a heavy effect on how Ukrainian literary canon was taught in schools and universities (when it was taught), and how it, thus, was defined. A heavy emphasis, for instance, was made on the pastoral qualities of Ukrainian poetry: Ukraine was presented as an agricultural country, a country of the village people—kind, dreamy and, generally, harmless. Whenever a more dynamic piece of writing was allowed to enter the canon, it was only in a context of the proto-socialist or socialist writing, targeting the Russian Empire’s heavy abuse of its subjects, in particular through the institution of serfdom.

Needless to say, there was a lot left out of the Soviet-Ukrainian literary canon as we inherited it. Therefore, we still keep filling the gaps, discovering the new names, learning more about the already known ones. However, what I dislike about the process is that there is still a wide-present desire to construct a hierarchic structure, with all its unavoidable clichés and a dangerous quality to serve as an instrument of power. What I call a deconstruction of canon is this urge, shared by many young Ukrainian poets, to embrace the variety, which Ukrainian poetry can offer, while avoiding the idolizing attitude, still displayed by some people of the older generations, whose views were shaped by the Soviet regime.

Frankly, I disliked much of Ukrainian poetry that was taught to me at school. Of course, I started school in 1991, right after the collapse of the Soviet state and emergence of independent Ukraine, and therefore, was exposed to a censored canon I described above. However, quite sadly, I must admit that not much has changed since then: today I similarly dislike a lot of what my daughter, a fourth-grader, learns in her literature classes. I teach her what I learned from my own experience: to read outside the canon.

As for my writing, formally it falls into the less experimental category of contemporary poetry: I always use rhymes and meter. However, in using them I shun the clichés and seek the sharpness that always lies in the core of language—“strange and intoxicating, like a shining blade”, right?

Serhiy Zhadan (Ukraine) I have got a wonderful relationship with the tradition. Besides, what should we see as tradition today? For instance, I wrote my PhD on Ukrainian futurism, but even these days many poetry readers would consider it to be not real literature. In short, I love dead poets.

Andrei Khadanovich (Belarus)  Our literary classics usually attrack herds of talentless versifiers, idiologists, beurocracts, and tasteless critics. They helplessly imitate them, use their names in political speeches, errect their kitsch monuments, and pick their worst poems to include into school books. In short, they do everything they can to make everybody else, including young poets, hate the classics. This is what happened to Maxim Tank, a poet I quoted earlier. What can one do? What I did was that I took all thirteen volumes of his life’s poetic work and selected a book of a hundered poems, the kind that would move a contemporary reader. And the readers, including the young poets, showed much interest.