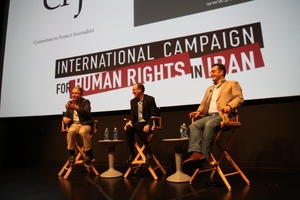 Last week, PEN American Center joined with the Committee to Protect Journalists and the International Campaign for Human Rights in Iran to host a screening of journalist and filmmaker Maziar Bahari’s powerful documentary film “Forced Confessions,” an exposé of the now-routine practice of extracting staged public “confessions” from political prisoners in Iran.

After the film, Maziar joined Jon Stewart and CPJ Executive Director Joel Simon for a lively discussion on press freedom in Iran in the run-up to the crucial June presidential election.

Maziar’s own ordeal will be very familiar to PEN members.  In her opening remarks for last Wednesday’s event, PEN American Center Executive Director Suzanne Nossel described his detention in the days following the contested 2009 presidential election, and the subsequent international campaign to free him, this way:

A major focus of his interrogation was an interview he did with the Daily Show’s Jason Jones shortly before the Iranian elections.  Jones had been dressed up like an American intelligence agent:  think checked keffiyah and dark sunglasses.  No matter how many times Maziar tried to explain it, the Iranian interrogators did not get the joke.

From the start, Maziar’s case mobilized PEN, an organization of the world’s leading writers.  PEN stands for free expression, and stands with writers, journalists and filmmakers who are threatened, detained and jailed for expressing their ideas.  PEN organized 100 leading writers in an open letter for Maziar.  Umberto Eco, Nadine Gordimer, Mario Vargas Llosa and others raised their voices on behalf of a creative voice that had been shut down and brutally punished.  They were part of a massive global campaign with CPJ and other organizations that mobilized more than 300 global artistic leaders with full page ads in major newspapers.

After 118 unfathomable days, Maziar was released.  He was united with his wife and newborn daughter, Marianna, in London.

Since his release, Maziar Bahari has been a leading international advocate for free expression and press freedom in Iran. PEN, CPJ, and a number of other organizations partnered with Maziar in 2010 to launch a campaign on behalf of imprisoned Iranian journalists, and Maziar and the Daily Show’s Jason Jones were reunited onstage for a wonderful program at the PEN World Voices Festival that same year.

The screening and discussion this past week comes amid a troubling pre-election offensive against journalists in Iran that we have been following since January. In addition to Maziar’s documentary, CPJ screened this short video with the latest disturbing figures on the ongoing crackdown.