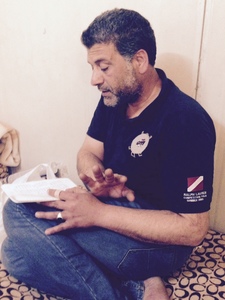 Khalid Hassan began to read. Instantly, the dingy and windowless cement room that had become his home fell away. The torn mat on which he sat seemed to vanish; he was on a stage. His right hand sliced through the air, and he recited for three with as much passion as if he’d filled an auditorium.

I visited the 47-year-old Hassan with Concern Worldwide, a non-profit doing compelling and groundbreaking work in northern Lebanon with Syrian refugees. Hassan is grateful to Concern for an innovative program that, he says, “made me feel human again.” Because of this, he agreed to tell his story, though the telling brought him pain.

Two and a half years ago, everything was going right for Hassan, a Syrian of Palestinian origin. After 17 years of renting, he, his wife, and three boys, now aged 18, 17, and 11, had moved into a home he’d built some five miles from downtown Damascus. His clothing shop was thriving. His oldest son was proving to be a gifted student. And after years of writing poetry and short stories, he’d begun a novel, a series of interconnected stories about the refugee experience.

Then the bombs began to fall near his home in Yarmouk Camp. Soon the camp was engulfed in fighting and then besieged. Food and medicine could not enter. Hassan locked his shop, took his family and crossed into Lebanon, telling himself it would be nothing more than a visit to relatives. They’d return home within weeks. Maybe sooner. It was early 2013.

As the fighting in Syria spread, reality sunk in. Hassan and his family had become among the almost 4 million Syrian refugees living outside their country. Another 7.6 million have been displaced within Syria’s borders. In all, Syrians who have fled their home account for one-fifth of the world’s total number of displaced people.

For Hassan, a long-term stay across the border raised logistical issues that he, as the head of his family, needed to handle. He began to look for work and housing. Eventually he started to land day jobs as a tile layer. He found free, if shabby, lodging in a Palestinian refugee camp near Tripoli.

He also lost nearly 50 pounds within two months. Besides, his anger and sense of injustice, worthlessness, and hopelessness soared, impacting the fabric of family relations.

“Before this crisis, we had a good, loving family. After we became refugees, we reached a point where we were all miscommunicating,” he said as he served us Turkish coffee and cookies pulled from coffers we knew were near empty. “We became a family in conflict and in trauma—a family, but not a family.”

And he couldn’t even find comfort in his usual way: through writing.

“I have always written, since I was a child,” he said. “Writing is my love, my outlet. Before, I would often read a story I had written aloud to my family. Sometimes we would laugh together or cry together. After the crisis, I felt as if my hand were cut off.”

As the months piled on one another, he grew more despairing. In December 2014, Hassan suffered a heart attack.

One month later, he began to participate in a Concern-sponsored men’s group, the first of its kind for Syrian refugees in Lebanon. The project is based on the belief that helping men recognize their own traumatization is key to improving the lives of their entire families.

“In Arab masculine society, we are driven by the idea that we should be machines and provide for our families, or else we are worthless,” he said. “I knew I had to change this approach. I took the group very seriously.”

The three-month project includes weekly discussions with videos, guest speakers, worksheets, references to the Quran, and more to help spur dialogue around issues such as domestic violence and early marriage. Men also talk about the refugee experience, strategies to deal with exploitive employers, and more. They are given $2,000 toward a community project, and decide together where they should invest.

Very quickly the men, who often reported feeling isolated before, find themselves part of a supportive community.

“The sessions made me feel someone cared for me,” Hassan said. “They even changed my sense of what it is to be a man. As we were talking about life and its real meaning, I started to think about myself and analyze what was happening with me. What I realized was when you understand the real basis of what you are feeling, you are almost 90 percent of the way there in terms of solving it.”

The work Hassan was doing in the men’s group also transformed the quality of his conversations with his wife. “We began to have more control over our thinking together,” he said, “and together we decided that our children must return to school. It was a priority. So my wife went to Syria with two of my children, to get their papers, so they could return to classes here in Lebanon.”

New border regulations, however, have prevented his wife and children from returning. When he talks about this, he loses his ability to speak, and he swipes at tears.

“I wake sometimes and think I’m in Syria,” he said. “I call out to my wife, but she doesn’t answer… I thought I would just return to Syria so our family could be together. But yesterday we spoke on the phone. My wife told me the situation is still very dangerous. She said: ‘In Syria, we cannot count on staying alive.’”

Hassan knows well that refugee’s struggles are ongoing. He feels them. But he also feels more equipped to meet the challenges. He also has begun to write again, including work on his novel.

He remembers the evening when he was able to pick up his pen. “Our men’s group had a good discussion that lasted four hours,” he recalled. “Afterwards, I felt human again. And feeling human—that is what allowed me to write.”