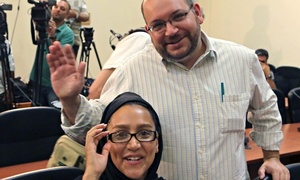 The espionage charges against American journalist Jason Rezaian and two others are entirely unfounded given that the journalists have never had any direct or indirect access to classified information, said PEN American Center in a statement today.

The trial of Washington Post Tehran Bureau Chief Rezaian and two others—Rezaian’s wife Yeganeh Salehi, also a journalist, and an unnamed photographer—opened today behind closed doors in Iran. Rezaian and the others are stand accused of four charges in total, including vaguely-defined “espionage” and “collaborating with hostile governments.”

Rezaian, his wife, and a photographer were arrested on July 22, 2014, and held without charge. Salehi and the unnamed photographer were released in September, but Rezaian has been repeatedly denied bail. He continues to be held in deplorable conditions in Evin Prison, which is notorious for the housing—and torture—of political prisoners. Rezaian was kept in solitary confinement for six months and continues to be held with only one other prisoner. He has been consistently denied visits from his family. Over his 309-day confinement, Rezaian has been allowed only two meetings with his lawyer: the first in judge’s chambers where the two were prohibited from discussing the case and the second less than 90 minutes in the presence of two official state interpreters.

Rezaian’s lawyer, Leila Ahsan, has reviewed the indictment brought forth by the Iranian state and said that the case file presents no evidence to justify the accusations against Rezaian. The judge presiding over the case, Abolghassem Salavati, is a hardliner known for his harsh sentencing and appeared on a 2011 European Union blacklist of Iranian officials for abhorrent actions regarding human rights.

“It is clear that the unsubstantiated charges against Jason Rezaian and two others are politically-motivated attempts by the Iranian government to send a message to all journalists stationed in Iran,” said Karin Deutsch Karlekar, director of free expression programs at PEN American Center. “The international diplomatic community must continue to press Iran on its widespread abuse of human rights, and to demand that Rezaian be released and the unfounded charges against him and his colleagues be dropped immediately and without condition.”

I really liked this #BannedBooksWeek display in the Teen Area. The display includes a printout of the full latest PEN America report: https://pen.org/report/banned-usa-growing-movement-to-censor-books-in-schools/

96% of bans were enacted without following the best practice guidelines outlined by @ALALibrary and @ncacensorship. #BannedBooks

“Young people of the world are my children, and I think we should all think that way.”

We think author @BenjaminASaenz may actually have the secrets of the universe. #VelshiBannedBookClub #Velshi
http://ow.ly/ouSN50KZ9Ph