The Kachin: Culture of the Mountain Lords 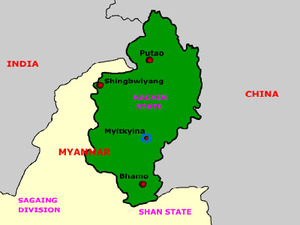 One of the problems shaking the state of Myanmar is the various ethnic conflict that has arisen in the wake of the faltering dictatorship. While the majority of the population speaks Burmese, at least one hundred other languages are spoken within the country. The intrinsic value of the culture and literature needs to be understood in order to prevent the state from breaking up, writes Lucas Stewart, a Myanmar expert working for the British Council.

“Once we looked to our cultural elders for guidance—now we look to soldiers.”

Duwa Howa Zau Gam leans on a walking stick and turns his back to the weak sun. It is still winter in Myitkyina, the capital of Kachin State in northern Burma. Half a dozen men in heavy coats circle around us, respectfully keeping their distance but close enough to hear his words. As the scion of Duwa Hkun Hpung, a signatory to the 1947 Panglong Agreement and a veteran of the famed World War II resistance fighters (known as the 101st Kachin Rangers), he understands all too well that, in Burma, the sword is perversely mightier than the pen—that, in Kachin State, conflict has overruled culture.

Throughout Kachin State’s history, the role of soldiers—both from the government’s Tatmadaw military and the rebel Kachin Independence Army (KIA)— has often been described within an eco-political paradigm. Both parties cite political factors behind the five decades of conflict. The unity of the republic stands against regional federalism (if not outright autonomy) and, to force a victory, both sides are fighting for economic control of Kachin’s lucrative jade mines and timber extraction industries.

What is curious, though, is the widespread disregard for the Ethnic Cultural Groups (the ECGs) operating under the same disheartening environment as their political and military counterparts, and often towards the same goal: an end to the war. The six major ethnic groups that make up the Kachin people are fiercely proud of who they are. But it is a pride largely connected to their cultural identity and not to how many guns they own.

If there is a place in Kachin State where this attitude is being reversed or at least challenged it is in Myitkyina. If you travel through Myitkyina’s bleak streets and pass the whitewashed, government-run Museum of Culture opposite the lurid green KIA Technical Advisory Office, you will come to the circular Manau Park where the annual  Manau dance spectacle is held—or was held. As of 2010, the government has banned the festival on the grounds of security. At the far end of the patchwork of fields, just before they slide into the Ayewaddy River, lies a group of detached two-story wooden houses. One of these houses is the office of the Wunpawng Shingni, the Kachin Arts Organization. Formed in May 2013, the organization is staffed by two hundred volunteers who work in eight different sub-committees, pursuing activities from textile to documentary production.

K. Bawm Awn, the Chief Editor and Publisher, hands me the latest edition of their Jinghpaw language journal, which shares its title with the name of their organization. Considering the fact that Myitkyina has only one printing press capable of producing journals or books, as well as the inhibiting cost of ink and paper, I was surprised at the quality of the printing. “We print in Yangon and then put it on the train to Myitkyina,” he explained. “It takes over two days to get here. At the moment we are only distributing in Myitkyina, but we will send copies to other townships soon. In January we sold five thousand copies; in six months we hope to raise that number to ten thousand.”

If Mr K. Bawm Awn reaches that figure, it would prove the resilience of the Jinghpaw language, which has faced  five decades of the government suppressing their literature. Like all other ethnic minority languages in Burma, teaching the Kachin languages was forbidden under the military junta due to unfounded fears that it would create national disunity. A June 2012 proclamation from the Ministry of Education, which allowed ethnic languages to be taught in schools, was praised as another example of the liberalizing reforms set in motion by the new government; however, a deeper analysis of the new law quickly reveals that it is not as all-encompassing as the Western media make out. Teaching ethnic minority languages and literature in state schools is still outlawed, the only difference being that it can be taught on school premises after the school has closed and—for some seemingly arbitrary reason—only up to the third grade. Beyond that point, students must rely on the ethnic cultural groups for instruction in their own native tongue. This has inevitably led to a language still fixed in the 19th century, when it was first provided a script by Swedish missionary Ola Hensen.

To turn the tide, a group of Myitkyina-based academics have formed the Kachin Dictionary Committee (KDC). Based in the house next to the Wunpawng Shingni, the KDC have spent the last ten years researching, collating, and updating a 21st century dictionary for the Jinghpaw language modeled on the Concise Oxford English Dictionary. Reverand Manam Hpang, the Chairman of the KDC, introduced me to the committee, stressing that they were all volunteers working for the love of their language. “We must strengthen our language and our learning,” one committee member said. “We must use our letters to preserve our literature,” said another.

If they could only afford to print it. The dictionary was ready to be distributed to universities across Myanmar by March 2014. When I asked about their biggest challenge, they all agreed that they need a projector so that multiple proofreaders can check a manuscript at the same time. A projector costs $150.

As I was about to leave, the committee wished to present me with a sample page of the dictionary but had sadly run out of paper with which to photocopy it. Not that it mattered, though, since the city was in the middle of another eight-hour blackout (I later received a copy from a member of the KDC, who went out of their way to find me as I left Myitkyina). This chronic lack of funding is an issue that affects all ethnic groups in Kachin State. While the number of international non-governmental organizations in the country increases, the focus of their development projects tends to be on health, the rule of law, the transition from democracy, and the all-important “capacity building.” Culture rarely figures in the bidding process.

Next week, PEN American Center will bring writers Ma Thida, Nay Phone Latt, and Khin Ma Zin from PEN Myanmar to visit the United States to talk about the state of literature in Myamnmar and the ongoing struggle for a free press, free expression, and interethnic harmony.