A Letter from an Azerbaijani Prison 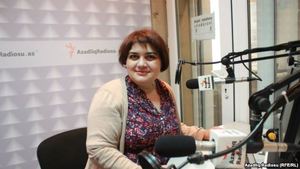 Please forgive my long silence. I was put in solitary confinement after my last letter was passed through these prison bars and published. My cell was searched and all my notes, including lists of things I was requesting from home, were taken. I have not received these back. I guess there are many devoted readers of mine at the penitentiary. They are taking turns reading my notes. That is why it is taking them such a long time to return what they have taken from me.

I have not been allowed to see my family, either. The arbitrariness of the penitentiary system allows me two phone calls each week that I use to speak with my mother but, contrary to the law, denies her and my lawyer regular visits. I have access to very little information. At least I have books to keep me company. I am translating one of these—Children of the Jacaranda Tree by Sahar Delijani—a novel about history and memory that is woven around the interlocking stories of three women imprisoned in Iran, and the people who support and are supported by them.

Maybe I will write a sequel to tell the stories of my five cellmates, and what their incarceration says about this country and its future. Among us we have created a family, a tiny ecosystem that gives us strength and helps us stay strong. My cellmates are also my new audience, that most precious thing that every journalist must have, even a journalist whom the government is trying to silence and pack away. I am no longer on the air, but inside these walls I’m connected to the struggles of Azeris in a more direct and personal way.

“Why am I here?” is a question that everyone in prison asks themselves, no matter the crime. Corruption is the reason I am in my prison, but the regime’s corruption, not mine. The only way to prove oppressive regimes wrong is to continue exposing corruption, and I have promised more investigations for 2015. Yes, there is a price to pay, but it is worth it! My arrest proves one more time that we must build a new reality where telling the truth will not require courage.

But what about the real crimes—the theft, the contempt for the law? What pushes people to commit these crimes?

In a country where unpunished crimes are at a record high and deeply rooted in all levels of government, there is a simple logic that prompts people to commit crimes. “If it is good, why can’t I do it?; if it is bad, why are they doing it?” And then the conclusion: “If they can do it, I’ll do it, too.” This is the mentality bred by a morally bankrupt regime that has turned my country’s justice system into a corrupt machine.

But the heart of the matter goes deeper than this. It is about power and greed, beginning with the president of the country down to the petty officials who showcase the most dramatic examples of corruption and impunity. This a country where money and power can cover up any crime, and where truth and deception have traded places. As a result, there are some 100 political prisoners behind bars in Azerbaijan. Think about the significance: In a very small, yet strategic and potentially volatile country bordering Russia and Iran, 100 of its best and brightest, its most aware, active and internationally engaged citizens have been removed from public life for the crime of seeking decency and fair play.

We also constantly ask ourselves where are we going, and what will we get in the end? In Kurdakhani prison, where I am now, the usual answer is three to five or five to twelve years in jail. But my answer is that there is no end. The fight between good and evil goes on, and the most important thing is that this fight should not end. If we can continue to reject the thinking that is imposed on us and believe that human dignity is not for sale, then we are the winners, and they, our jailers both inside and outside prison, are the losers. Prison is not frightening for those trying to right a twisted scale, or for those who are subject to threats for doing the right thing. We see clearly what we must fight for.

Life is very complicated, but sometimes we get lucky and are offered a clear choice, between truth and lies. Choose truth and help us.

A Ugandan court ordered security forces to cease surrounding the home of opposition leader Bobi Wine, who has been under house arrest since the January 14 presidential election. https://bit.ly/368Gzhy

Authorities in China are stepping up charges against two prominent activists with the New Citizens' Movement detained after an informal gathering of dissidents in the southeastern port city of Xiamen in December 2019. https://bit.ly/3ohRtrs