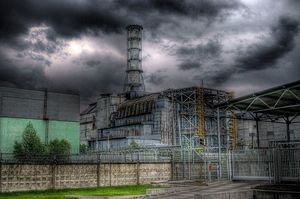 Scene 1
“Look at those aged female paratroopers—they get promoted and are now called lionesses, the armed forces’ lionesses!” is the first thing my mother says on seeing a TV report on women who sign up voluntarily to defend Bashar al-Assad’s regime.

Scene 2
Another TV channel shows a crowd of old women flocking around the tyrant. They’re all smiling at the camera. National unity is flying high.

Scene 3
Image 1: A headline on YouTube: A demonstration in front of the offices of al-Nusra (an extreme religious faction) in al-Raqqa, one of the cities wrested from government control. I click on the headline and shrink back to prepare myself for yet another massacre. The film starts with a bare-headed woman leading a demonstration calling for the release of all prisoners and the downfall of the regime. Sorry, I mean al-Nusra’s downfall, of course.

Image 2: “When you visit al-Raqqa, ask for the Butcheress,” a friend tells me with a chuckle. Who is the Butcheress? I ask. “She’s in charge of the al-Nusra prison and the female prisoners there. She loves terror and has mastered all kinds of torture techniques. Her reputation has spread beyond our borders. She has even whipped the unveiled woman leading the demonstration.”

Image 3: Attention, Aleppo-ites! It doesn’t matter whether or not those of you who are present inform on those who are absent. Attention, Aleppo-ites! By order of the highest judge in the Sharia court, as of today no Muslim woman may leave the house wearing makeup or tight-fitting clothes that show off the figure. All sisters must obey God and observe Muslim morality!

Scene 4
A news report from Egypt’s National Council for Women: “In Egypt, 12,000 marriages have taken place between Syrian refugee women and Egyptian men within the space of a year. The price for a divorced woman is 500 pounds, 2,000 pounds for a virgin.” While I read the news, I’m reminded of a person who said: “The coming days promise some nice surprises for the Syrians.”

Scene 5
Not a day goes by without me hearing the same old refrain from my women friends: “Shouldn’t the opposition council represent the revolution? Where are the women? Don’t we make up half of society? After all the sacrifices we’ve made, is there no one other than that little Miss to represent us? Can you believe it? The same little Miss at the same post, again and again,” they repeat.

Scene 6
Someone mails me: “You’re a writer, you’ve got a broad contact network, can’t you help me get to a workshop on working with civil society? I haven’t had an invitation like that for ages and I’m terrified of ending up prostituting myself”. I think for a long time before answering: “Hang on in there, hang on in there…”

Scene 7
Sunrise. While I was in the Al-Qaboun quarter preparing a report on human suffering during Ramadan, I met a woman who had lost her husband and father in a mortar attack. I still remember her exact words when she told me about how she gave birth to her baby: “We fled at night from the bombing of our quarter to another quarter. I gave birth to this baby girl during our flight. Thank God she won’t remember what happened. I want her to get an education and experience life on her own terms without anyone else ordering her what and what not to do. I’m not grieving. I’ll give up everything for this girl’s future.”

Scene 8
After the Chernobyl disaster, nature has demonstrated its ability to heal itself without human intervention. It also turns out that natural re-growth there has increased faster than anywhere else to the extent that many endangered species have been able to recover in the absence of human activity. The area has become a nature reserve. The radioactivity in the area is now no longer a hazard but a barrier protecting it from human incursion

Scene 9
I read some comments on the chemical attack in Al-Ghouta carried out by the regime’s hooligans. When I see these comments that effectively mean “This massacre represents me”, I think of Zlatan Ibrahimovic and realise how similar we are. Can Zlatan, after having done all he could in the World Cup to lift the trophy, blame his country for being denied the joy of doing so? They’d selected teammates who could only attain bronze in the quarter finals, if God listened to their mothers’ prayers. Echoing around my brain is a line from Agent Smith in Matrix: “Human beings are a disease, a cancer of this planet”.

Scene 10
The massacre is also rich pickings for the poets of cyberspace, who cover a larger area than the blue band on the Facebook mainpage. One writes about hell. The other counters with a poem on eternity. A third with a poem on meaninglessness, only to disappear herself into nought. And so they continue until the first clicks on the offline circle and stops the wheel before setting it spinning again the next day. Everyone can write about the massacre, but few can write about it like this: “Yesterday, under the same sun and on the same patch of Earth, we shared the oxygen with a thousand other people. Today, their share of the air falls to us. It would be only right to remember them with every breath we take”.

Another writes with more linguistic complexity: “In the massacre a thousand people are struck down, and every day a massacre strikes. An equation in your way of calculation is that every day equals a massacre. It is an equation that does not balance. Humanity no longer exists. Eyes are dry”.

But all talk about the massacre while it is in progress cannot come from pain. No matter how heartbroken the words. All are writing about the massacre, but none has managed to describe its true nature. Perhaps because what one writes is a private initiative taken to defend oneself from the accusation of emotional atrophy. Perhaps to show that one’s ability to feel grief escaped the first massacre. But it’s just an attempt to give the kiss of life to something that’s already died.

Scene 11
I basically just watch the National Geographic channel these days. For the simple reason that the channel doesn’t take sides in the battles between the animals. But every time I want to hear the opinions of the other side, I watch the pro-Assad “Al-Khabar” channel.

Once, after having sat staring intently at the channel, I wanted to get to know the people behind it. The reason was a five minute news broadcast which accused the Lebanese singer Majda Al-Rumi of being a spy for Bahrain’s royal Al-Khalifa family. The item was followed by a statement from singer Alisa on the explosion in southern Beirut. This was followed by a report about a German hiphop artist, who had come to Syria to fight with al-Nusra. Most important of all was the acoustic background to the item: the song “No one can fill your place in my heart”.

Scene 12
Not a day goes by without my yearning for Syria dominating my desire to shed tears. But this feeling has never been as strong as when the first battle between the Muslim Brotherhood and the military erupted outside my home in Alexandria. Images from every corner of my country invaded my thoughts. I remembered nothing other than images of devastation, bombings and death. Perhaps because I’d never known my country before I watched it fall apart. I was drawn to the window. Against the sound of a sniper shot that I could never have picked out in Syria, even during the most ferocious clashes. The sound took me aback. I’d thought that sniper killings were something that only Syrians did. But now I know better. The Egyptians have their own snipers.

Scene 13
I go into Facebook to catch a glimpse of the people I know and who haven’t yet been swallowed by dungeons or blown to bits. On one friend’s page I once read a posting by a beautiful woman. I don’t remember what she wrote because, to be honest, I quickly clicked on to check out her photographs. I was afraid that the automatic update would remove her. The truth is that for a brief moment I wanted to forget the girl who, after a bomb raid, called out “Hey mister, I’m alive”. I still think about the place that was transformed in a matter of seconds into a non-place in front of her terrified eyes. I think about her voice when she asks the doctor beside her: “Am I in paradise now?” Is paradise so horrific? I quickly counted the posts on my friend’s page and then wrote to the beautiful woman: “Isn’t it strange that we’d never met before despite the fact that the distance between us is only 127 anti-chemical weapons emblems?” Syria’s profile picture.