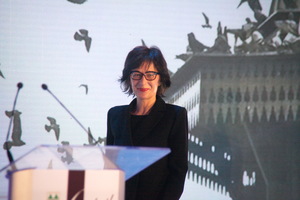 The decision by the War Crimes Tribunal at The Hague to jail French journalist and writer, Florence Hartmann, in solitary confinement is a hugely disproportionate response to her conviction, PEN International said today.

Hartmann, a former journalist for Le Monde, was convicted of contempt of court in 2009 for disclosing in a book that the tribunal had withheld crucial information on the Srebrenica massacre of 1995 from the international court of justice. In her book Paix et Chatiment (Peace and Punishment), which was published in 2007, Hartmann revealed the documents appearing to prove Serbia’s complicity in the Srebrenica genocide, which had been sealed by the Hague Tribunal. Her conviction was later upheld on appeal. She was originally fined €7,000, but that sentence was later converted to seven days in jail after the tribunal claimed the fine had not been paid.

Hartmann was grabbed by guards outside the U.N. war crimes tribunal last Thursday as the Court convicted Bosnian Serb leader Radovan Karadzic of genocide over the 1995 massacre in Srebrenica and of being one of the chief architects of atrocities during the 1992-95 Balkans war. He was sentenced to 40 years in jail.

Talking to the media, Hartmann’s lawyer said that his client was being held separate from other detainees, “under suicide watch conditions, meaning with light in her cell 24-hours a day and that she is being checked on every 15 minutes by the guards.”

“Hartmann’s conditions of detention are wholly unacceptable and totally disproportionate,” said Carles Torner, Executive Director of PEN International. “We call on the authorities to immediately change the conditions of her incarceration and call for her early release.”