Rendering the Poet’s Vision in “The God Abandons Antony” 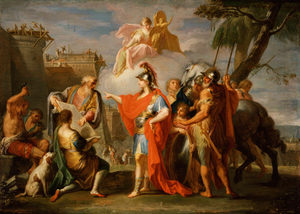 When suddenly, at midnight, you hear
an invisible procession going by
with exquisite music, voices,
don’t mourn your luck that’s failing now,
work gone wrong, your plans
all proving deceptive—don’t mourn them uselessly.
As one long prepared, and graced with courage,
say goodbye to her, the Alexandria that is leaving.
Above all, don’t fool yourself, don’t say
it was a dream, your ears deceived you:
don’t degrade yourself with empty hopes like these.
As one long prepared, and graced with courage,
as is right for you who proved worthy of this kind of city,
go firmly to the window
and listen with deep emotion, but not
with the whining, the pleas of a coward;
listen—your final delectation—to the voices,
to the exquisite music of that strange procession,
and say goodbye to her, to the Alexandria you are losing.

It would be normal to assume that a translator is intimately familiar with both the language to be translated and the target language, and Cavafy has been generally fortunate over the years to have had translators of his Greek into English who appear to have known both languages reasonably well. Yet the curious fact is that a crucial line in one of his most important and popular poems, “Απολείπειν ο θεός Αντώνιον,” usually rendered as “The God Abandons Anthony,” has never come out quite as it should have in English.

The line I have in mind is “σαν που ταιριάζει σε που αξιώθηκες μια τέτοια πόλι.” Why is it a crucial line? In the poem we hear the poet’s persona telling the great Roman Anthony what his stance should be as he listens to the music of the invisible procession that marks the departure of his god after the defeat at Actium, not the gods of the poem’s sources, but the city of Alexandria as Cavafy understood that city. And the persona makes clear that Antony’s stance should be in keeping with what a citizen of Cavafy’s Alexandria will have learned: to see things as they are without illusions, to face failing luck courageously, to honor the passionate life. What the line in question tells us is that Antony should listen to the passing music and voices of the strange procession signaling his death in a way that is right for someone who has proven worthy of the kind of city he is about to lose, a city of sensual pleasure and devotion to art that offers him the final pleasures of this exquisite music as it passes out of his life.

It is the verb “αξιώθηκες” that is problematic in all the English versions, the Keeley-Sherrard version included. The many translators who choose to translate the verb attached to Antony as “are worthy” or “was worthy,” or simply “worthy” seem to have the verb αιζεισς in mind, perhaps recognizing the Roman’s stature but not what the poem implies about all that the triple pillar of the world has come to know and celebrate in Alexandria. Valassopoulos sets the tone in the first published translation of the poem with his “like the man who was worthy of such a city.” Worthy when? Presumably not on Antony’s arrival in the city, at least not until it had taught him the virtue of its particular pleasures. John Cavafy’s early version with his “you who gained” for “σε που αξιώθηκες” comes closer to the poem’s pulse than “was worthy,” as does the recent Sachperoglou version, “you who were deemed worthy,” but these phrases don’t suggest how gained or who deemed, when the point is that Cavafy’s persona, and his vision of Alexandria are bringing Antony this final recognition for what he has learned. And Daniel Mendelsohn’s very recent “blessed with a city like this,” appealing as it is, also seems to me to introduce a somewhat inappropriate biblical overtone. Finally, those who tell us that Antony “deserves” the city he’s losing, or has such a city “as his due,” avoid the nuance of the Roman’s having come to see at least something of what the god Alexandria represents and having thereby earned his citizenship in Cavafy’s city.

The English versions of the concluding phrase in the line, “μια τέτοια πόλι,” which we find usually rendered as “such a city,” or even “so great a city,” too easily limit the more complex implications of “this kind of city” that would be amply dramatized as Cavafy moved forward from this crucial year of 1910, when he began to establish the full dimensions of the mythical city that was to be his preoccupation from this date until his death twenty-three years later. The line we’ve extracted, and especially the verb “αξιώθηκες,” tell us that, in the end, Roman Antony proved worthy of the kind of city the Greek poet Cavafy was now engaged in creating with the full devotion, courage, and wisdom of his mature life. So, “you who proved worthy of this kind of city” for Cavafy’s richly loaded Greek line? Maybe that’s the best we can do.