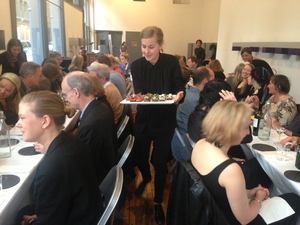 Amid the impressive and overwhelming lineup of this year’s PEN World Voices Festival, “Babette’s Feast 2.0: 101 Spring Street” stood out for its tantalizing premise. Who could resist the opportunity to hear readings from five prominent, mostly Nordic, writers—a literary smörgåsbord if you will—while dining on Danish delicacies in the recently opened SoHo studio of Donald Judd, the titan of minimalism?

To make the recipe sweeter, the night would invert the very nineteenth century supposition of the Danish novel and film—in which ascetic, Scandinavian Puritans find transcendence through the artistry of French cuisine—and celebrate Nordic creativity in all fields.   In an era when IKEA is king and the Copenhagen restaurant Noma was yet again named the best in the world this week (Jean-Georges came in at 98) the comeuppance seemed fair.

Attendees were greeted by an elegant mise-en-scène on the austere ground floor of the former factory building, adorned only by a few select, unobtrusive sculptures by Judd and the light filtering through the floor to ceiling windows. Guests and the authors—press unfortunately excluded—were seated at a horseshoe-shaped table swathed in white tablecloths holding numerous bottles of wine. Round mortar bowls served as centerpieces, brimming with rustic bread not so dissimilar to the uninspiring Danish rye bread the French chef Babette, the eponymous heroine of the story, learns to stomach.

In her introductory remarks, the event’s moderator, Norwegian-American author Siri Hustvedt, reminded the audience that Karen Blixen’s 1950s short story was originally set in Norway before the director Gabriel Axel decided to move the action to the remote Danish coast of Jutland for his Academy Award-winning 1987 film adaptation. After leading everyone in a toast and praising what she called a “fable about sensory pleasures of the body and their happy disruption of abstemious religiosity,” she welcomed the group to “some version of Babette’s Feast.”

Hustvedt read from her latest novel The Blazing World, which centers on an underappreciated artist who devises a plan in which her work is exhibited under the names of invented male artists in order to expose what she sees as the antifemale bias of the art world. Hearing the passage in the former home of Judd—celebrated and successful and a would-be contemporary to Hustvedt’s fictional heroine—was particularly pointed.

The English author Wesley Stace (as the only non-Nordic participant he acknowledged his sole tie to the region was presently feeling “quite Scandinavian since I just watched  all three seasons of Borgen) read several passages from his novel Wonderkid. Stace said his book, in which a British rock group is turned by a record label into a popular band for children, was interested in the idea of disruption and nonsense, and his own belief that “nonsense is one of the most powerful methods of protest in authoritarian places.”

Sofi Oksanen, a Finnish-Estonian novelist and playwright, read from her acclaimed 2008 novel Purge, part of a series of books she has written about Estonian society post-World War II.  Oksanen said she sought to bring attention to the use of sexual violence against women as a tool of war. Speaking with focused intensity about the anger that compels her to write, she dismissed the romantic ideal of artistic creation saying “If I had any other kind of skills I’d do something else but I am a writer. This is my work . . . but I don’t feel like a better person or consider it therapy.”

The final presenters were the Swedish writer Tomas Bannerhed, reading from his 2011 novel The Ravens about Swedish farmers and mental illness, and the Danish author Janne Teller, reading from her book Come which questions the role of ethics and art. The evening ended with Teller’s discussion of the responsibility and ethical obligations of freedom of speech, a perhaps surprising suggestion coming from an author who once found her writing banned and serves as the president of the Danish chapter of the freedom of expression group PEN. While stressing that she wasn’t referring to rules or regulations, she marveled that “the only field where transgression is always lauded is art.”

There were grumbles of disappointment when it was announced that the previously scheduled tour of the Judd building was cancelled due to time constraints but the crowd consoled itself by picking at what was left of the night’s offerings from the chefs at TriBeca restaurant The Copenhagen. There was no cailles en sarcophages (a dish of stuffed quails in puff pastry that is Babette’s pièce de resistance) but we had all marveled—and from the press section, with increasing hunger pangs—as the waiters served the tables throughout the night. Attendees selected from trays lined with exquisite smørrebrød (Danish open-face sandwiches on rye bread), laden with pickled herring with crème fraîche, salmon with curry and mustard brown sugar, and pickled bacon. The evening highlighted just how ahead of its time Babette’s Feast was in many ways, celebrating food as a kind of religion and art decades before that became the gospel in places like Brooklyn and San Francisco. With the lingering taste of fresh fish on their palates and the night’s conversation still ringing in their ears, guests went out into the balmy night in one of those sated moments in which, as one character in Babette’s Feast so memorably puts it, “righteousness and bliss kiss one another.”