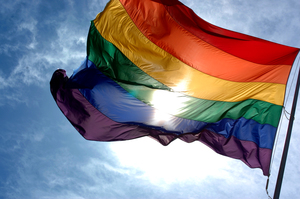 Joseph Huff-Hannon is an award-winning writer and a campaigner with Avaaz.org, a global human rights and social justice network with over 27 million members worldwide. Joseph was also a founding campaigner with global LGBT rights group All Out. Joseph sits on the boards of the Aronson Awards for Social Justice Journalism and the Yes Lab for Creative Activism. More of Joseph’s journalism, writings, and occasional scribbles can be found here.

This past Friday, while Russia’s extravagantly produced Winter Olympics Opening Ceremony was broadcast worldwide, four activists in St. Petersburg were arrested and taken in to custody, as was their banner, which read, “Discrimination is incompatible with the Olympic movement.” That same evening while ballet dancers draped in glow in the dark costumes danced to Tchaikovsky in Sochi’s Olympic Stadium, ten more protestors in Moscow were arrested in Red Square for singing the national anthem and unfurling rainbow flags. The activists may well be charged with a low-level administrative offense (protesting without a permit,) but their late-night stand was clearly meant as a challenge to the country’s notorious new ban on “gay propaganda.”

For an authoritarian state, a law that is rarely, or only very selectively enforced, yet gives agents of the state broad leeway to police their citizens, and leads to wide-ranging changes in public and private behavior, is the best kind of law there is. Since it’s passage last June, only half a dozen people have actually been charged or tried for violating the vaguely worded ban—and perhaps that’s the point.

In a new book I co-edited with Russian American journalist Masha Gessen, Gay Propaganda: Russian Love Stories, a collection of profiles and testimonials about the romantic lives of LGBT Russians, this absurd new law floated in and out of almost every story we collected. What is clear about the way the law works, from talking to dozens of LGBT Russians over the last months, is that even if federal enforcement has been minimal to date, the law gives a state-sanctioned green light to people and institutions to take up enforcement on their own.

Oleg, a gay man now seeking asylum outside of Russia, until recently worked at an influential television network in Moscow. He recalled the day his station refused to air news about the Cannes Film Festival last fall, because the winner of the Palme d’Or was a steamy film about a lesbian relationship.

Nastya, a young woman who’d been through family hell and back to remain in a relationship with her girlfriend Lena, recalls her mother’s reaction to the new law. “The state politics have given my parents a second wind,” she told Masha, “My mother called and said, ‘They’re going to start sending your kind to jail soon.’”

Another couple, Anya and Nata, dance fanatics who specialize in West Coast Swing, watched one of their favorite dance studios shut down—it could no longer offer its popular partner dancing classes for women.

Sometimes the threat is direct and to the point. Alex, on hiatus after working a decade with an international agency in Moscow, told me about multiple visits from members of the Federal Security Agency (FSB) this past fall. Amongst other things, they knew about his marriage to another man (Alex married his husband Misha in 2011 during a visit to Washington, DC,) and threatened to use it against him if he didn’t return to work at his former agency and be their spy on the inside.

“They explained very clearly that the new laws would make it “no problem” to arrest us,” Alex told me. Soon afterward his husband Misha was shoved in to a car and pummeled by masked men who didn’t rob him of a cent, but told him he needed to pressure Alex to “do the right thing.” Alex and Misha left the country shortly after, and are both now living in the U.S., where they’ve filed for asylum.

These are just a few examples, but they illustrate the point: the purpose of this law isn’t just to shove LGBT people back in the closet, it’s also meant to communicate to the society at large that it’s open season on gays and lesbians, a group the ruling elite has decided makes for a convenient enemy. But what happens when this trick wears out? What happens when the economy takes another dip, or discontent over rampant corruption finally boils over and the need for a new enemy arises—who will be next?