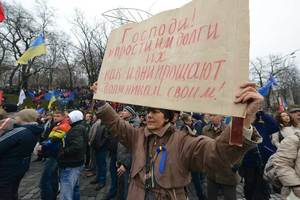 Since November 24, 2013, Ukrainian protestors have converged on Independence Square in Kiev, now popularly known as EuroMaidan, to challenge the government’s decision to abandon political and free trade agreements with the European Union.  Now in their fourth week, these protests have been met by brutal police crackdowns resulting in dozens of hospitalizations and arrests. Journalists have been the latest target of the violence: according to the Committee to Protect Journalists, at least 51 journalists have been injured in clashes between demonstrators and police since November 29.

Last week, PEN American Center and PEN Canada joined a petition by IFEX condemning the attacks. The open letter below from PEN International President John Ralston Saul calls on Ukrainian President Viktor Yanukovich to establish peaceful dialogue between protestors and authorities and to restore the right to free expression in the Ukraine for journalists and individuals alike. The letter is also available on PEN International’s web page along with a statement by PEN Ukraine, and a joint statement by PEN Moldova and PEN Romania on EuroMaidan.

I am writing to you on behalf of the tens of thousands of members of PEN International, the worldwide organisation of writers. We are deeply concerned about the escalating unrest in the Ukraine, and in particular about any negative impacts on the freedom of expression of Ukraine citizens demonstrating in Kiev and elsewhere.

We are greatly perturbed by news of attacks on journalists and other individuals on the streets and on the premises of The Writers Union in Kiev and by reports of persecution of student protestors in universities.

PEN calls for a real dialogue between protesters and authorities and full respect of human rights by all parties.

Peaceful exercising of the basic right to freedom of expression is the foundation of democratic society and should be respected by everyone.

Use of force or violence by the police against peaceful demonstrators and journalists is unacceptable. Authorities have a responsibility to guarantee that journalists are able to cover the situation in Ukraine.

We also call upon the authorities to make possible an independent inquiry on the dispersal of protests and on all the acts of violence in order to bring those responsible for attacks to justice.