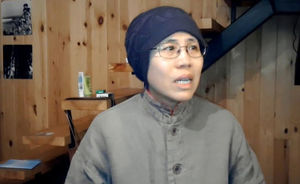 Last Friday, writers, activists, and intellectuals Hu Jia, Xu Youyu, Hao Jian, and Liu Di broke through a security cordon around their friend Liu Xia’s apartment in Beijing and were able to visit with her for several minutes. Hu Jia recorded the entire incident. Liu Xia, who has been held under extralegal house arrest since her husband Liu Xiaobo was announced the winner of the Nobel Peace Prize in October 2010, can at times be seen smiling, perhaps at the mere fact that she was finally able to embrace one or two of her friends, who she hasn’t seen in more than two years, and at times crying—terrified of any repercussions she and her family might face because of the breach. Since he released the video on Monday, Hu Jia has called on more citizens to attempt to visit Liu Xia, in the kind of grassroots activism that brought a wealth of attention on similarly imprisoned legal activist Chen Guangcheng and possibly enabled his escape to freedom in the United States.

So what can you do? Watch it. Share it. Write about it. Spread the word.