On the Edge: Total Destruction 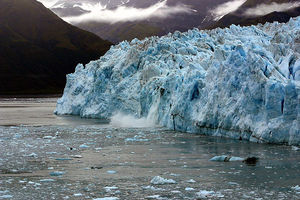 For the opening night of the 2014 PEN World Voices Festival, we invited some of the world’s most prominent writers and thinkers to take the stage for a 7-minute oration—a kind of mini-soliloquy of unrestrained intellectual fury—on the social or political phenomenon of their choosing. This was a rare opportunity to hear about the issues, both macro and micro, which preoccupy their imaginations and to learn about what they would change immediately if they had the means to do so. This is Noam Chomsky’s piece. You can watch a video of Chomsky’s piece here or watch the entire event here.

When I hear the phrase “on the edge,” the irresistible image is the proverbial lemmings marching resolutely to the cliff.

For the first time in history, humans are now poised to destroy the prospects for decent existence, and much of life. The rate of species destruction today is at about the level of 65 million years ago, when a major catastrophe, probably a huge asteroid, ended the age of the dinosaurs, opening the way for mammals to proliferate. The difference is that today we are the asteroid, and the way will very likely be opened to beetles and bacteria when we have done our work.

Geologists break up the history of the planet into eras of relative stability. The Pleistocene, lasting several million years, was following by the Holocene about 10,000 years ago, coinciding with the human invention of agriculture. Today, many geologists add a new epoch, the Anthropocene, beginning with the industrial revolution, which has radically changed the natural world. In the light of the pace of change, one hates to think when the next epoch will begin, and what it will be.

One effect of the Anthropocene is the extraordinary rate of species extinction. Another is the threat to ourselves. No literate person can fail to be aware that we are facing a prospect of severe environmental disaster, with effects that are already detectable and that might become dire within a few generations if current tendencies are not reversed.

That is not all. For the past 70 years we have been living under the threat of instant and virtually total destruction, at our own hands. Those familiar with the shocking record, which continues until this day, will find it hard to contest the conclusions of General Lee Butler, the last commander of the Strategic Air Command, which has responsibility for nuclear weapons. He writes that we have so far survived the nuclear age “by some combination of skill, luck, and divine intervention, and I suspect the latter in greatest proportion.” It is a near miracle that we have escaped destruction so far, and the longer we tempt fate, the less likely it is that we can hope for divine intervention to perpetuate the miracle.

We might wish to consider a remarkable paradox of the current era. There are some who are devoting serious efforts to avert impending disaster. In the lead are the most oppressed segments of the global population, those considered to be the most backward and primitive: the indigenous societies of the world, from First Nations in Canada, to aboriginals in Australia, to tribal people in India, and many others. In countries with influential indigenous populations, like Bolivia and Ecuador, there is by now legislative recognition of rights of nature. The government of Ecuador actually proposed to leave their supplies of oil in the ground, where they should be, if the rich countries would provide them development aid amounting to a small fraction of what they would sacrifice by not exploiting their oil resources. The rich countries refused.

While indigenous people are trying to avert the disaster, in sharp contrast, the race toward the cliff is led by the most advanced, educated, wealthy, and privileged societies of the world, primarily North America.

There is now much exuberance in the United States about “100 years of energy independence” as we become “the Saudi Arabia of the next century.” One might take a speech of President Obama’s two years ago to be an eloquent death-knell for the species. He proclaimed with pride, to ample applause, that “Now, under my administration, America is producing more oil today than at any time in the last eight years. That’s important to know. Over the last three years, I’ve directed my administration to open up millions of acres for gas and oil exploration across 23 different states. We’re opening up more than 75 percent of our potential oil resources offshore. We’ve quadrupled the number of operating rigs to a record high. We’ve added enough new oil and gas pipeline to encircle the Earth and then some.”

The applause tells us something important about our social and moral malaise. The President was speaking in Cushing Oklahoma, an “oil town” as he announced in greeting his appreciative audience—in fact the oil town, described as “the most significant trading hub for crude oil in North America.” And industry profits are sure to be secured as “producing more oil and gas here at home” will continue to be “a critical part” of energy strategy, as the President promised.

A few days ago the New York Times had an energy supplement, 8 pages of mostly euphoria about the bright future for the US, poised to be the world’s greatest producer of fossil fuels. Missing is any reflection of what kind of world we are exuberantly creating. One might recall Orwell’s observations in his (unpublished) introduction to Animal Farm on how in free England, unpopular ideas can be suppressed without the use of force, not least because immersion in the elite culture instills the understanding that there are certain things “it wouldn’t do to say”—or even to think.

In the moral calculus of currently prevailing state capitalism, profits and bonuses in the next quarter greatly outweigh concern for the welfare of one’s grandchildren, and since these are institutional maladies, they will not be easy to overcome. While much remains uncertain, we can assure ourselves, with fair confidence, that future generations will not forgive us our silence and apathy.