Letter from Kiev: What Can Ukraine Expect from the West Now? 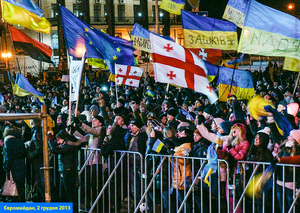 I write to you as a former prisoner of conscience of the Brezhnev era. All other titles are rapidly losing sense in the light of the bleeding Ukrainian Maidan.

All my life I admired Western civilization as the realm of values. Now I am close to rephrasing Shakespeare’s words: “Frailty, thy name is Europe!” The strength of bitterness here is matched by the strength of our love for Europe.

If it still concerns anybody in decision-making circles, I may answer the question in the title.

First and foremost, stop “expressing deep concern.” All protestors on the Maidan have an allergy to what is, by now, in these circumstances, a senseless phrase, while all gangsters in the Ukrainian governmental gang enjoy mocking the helplessness of the EU.

Take sanctions. Don’t waste time in searching for their Achilles’ heel: it is the money deposited in your banks. Execute your own laws and stop money laundering. The Europe we want to be part of can never degrade the absolute value of human lives in favor of an absolute importance of money.

Also cancel Western visas for all governmental gangsters and their families. It is a scandal that ordinary Ukrainians living their simple lives have to provide their ancestors’ family trees to obtain a visa while ruling criminals guilty of murder, “disappearances,” and fraud in the eyes of the whole world enjoy virtually free-entry status in Europe.

Do not listen to Yanukovych’s and Putin’s propagandistic sirens. Just put cotton in your ears. Be able to decode their lies; otherwise they will decode your ability to defend yourself.

Instead, listen to Ukrainian media sacrificing their journalists’ lives to get truthful information. Do not rely so much upon the information provided by your special correspondents in other countries who come to Ukraine for a day or two. Hire Ukrainians who live in this country to translate the Ukrainian cry of pain. Secure money for that right now instead of waiting for funds from next year’s budget.

Come to Ukrainian hospitals and talk to so-called “extremists” who want to “subvert the legitimately elected government,” those who have “cruelly beaten” policemen and “deliberately” blasted explosives to wound themselves. Yes, the face of war is cruel. But, arriving at the Maidan, these people repeated almost literally what King George VI said to his people on September 3, 1939: “We have been forced into a conflict, for we are called…to meet the challenge of a principle which, if it were to prevail, would be fatal to any civilized order in the world.”

Let us conclude in solidarity with the King and the Ukrainian people: “The task will be hard. There may be dark days ahead, and war can no longer be confined to the battlefield, but we can only do the right as we see the right, and reverently commit our cause to God.  If one and all we keep resolutely faithful to it, ready for whatever service or sacrifice it may demand, then with God’s help, we shall prevail.”

The views represented here belong to the author alone and do not necessarily reflect the positions of PEN American Center or PEN International.