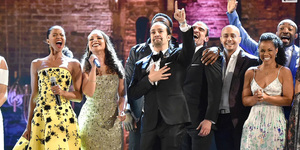 The ratings for last night’s Tony Awards surged 33%, achieving the highest figure in 15 years. It’s quite a turnaround from 2015′s ceremony, which flirted with all-time lows. For that, Broadway can thank James Corden, hip-hop and a certain ten-dollar founding father.
The Tonys served as high-profile confirmation of the worst-kept secret on Broadway: that Hamilton was the phenomenon of the season, perhaps of a generation. Nominated for a record-setting 16 awards, the musical took home 11 Tonys last night, the most of any production this season, one short of the all-time mark set by The Producers.
“It’s the kind of thing that happens once every 50 years,” explained Ron Chernow, whose Alexander Hamilton biography served as inspiration for Hamilton creator Lin-Manuel Miranda.
Hamilton–and hip-hop–have done something for the Tonys–and Broadway–for which the theater world has been praying, in its own secular sort of way, for quite some time: creating a magnet for the next generation of theatergoers, a lure for audiences younger and more diverse than the aging denizens of the Great White Way.
Broadway grossed $1.37 billion this year as attendance soared to 13.3 million, the best figure of all time; without Hamilton, overall numbers would be down 3%. The musical grossed $74 million, or about 5% of the industry’s total, and has been clearing over $500,000 per week in profits.
The numbers are undeniable–though, to be sure, if Hamilton hadn’t been occupying the Richard Rodgers Theater, another show would have; perhaps a decent production would have sent Broadway’s overall numbers closer to a flat, if not Hamiltonian, level. Similarly, in a world without Hamilton, the Tonys telecast still would have taken place, albeit with much less fanfare.
“The show is a money-loser for CBS, but there are certain things that are more important than making money,” Moonves explained. “I know this sounds corny, but part of being a broadcaster is public trust. And I believe it is important for us to show America what is happening on Broadway.”