A Long Road Ahead to Save Federal Arts Funding 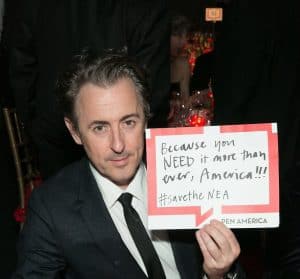 For artists, writers, and scholars across the country, the recent release of President Trump’s full budget proposal has been met with a now-familiar sense of dismay. The proposed budget would completely gut the National Endowment for the Arts (NEA), the National Endowment for the Humanities (NEH), the Institute of Museum and Library Studies (IMLS), and the Corporation for Public Broadcasting (CPB); in short, it takes an axe to our country’s foremost artistic and cultural institutions. But we had seen this coming a long time before: the Trump Administration had indicated its intent to defund these institutions even before entering office.

Arts and culture advocates have taken some solace in commentators’ declarations that this proposed budget won’t make it through Congress. The day the budget was released, The New York Times stated that the President’s party has greeted the budget with “open hesitation or outright hostility,” while CNN declared that the defunding of the NEA and the CPB were part of a set of “political landmines” for Republicans in Congress. Senator Chuck Schumer (D-NY) has said “the only good news” about the budget proposal is that it is “likely to be roundly rejected by members of both parties here in the Senate.” And it is also worth noting that the recently-passed 2017 Consolidated Appropriations Act, for federal spending until September 2017, actually retains or even increases spending for the NEA, NEH, CPB and IMLS.

With these reports, arts and culture advocates might breathe a sigh of relief, believing that our arts and cultural institutions will be saved from political interference. That would be a mistake.

It bears repeating that that organizations like the NEA are not “safe” from the chopping block until Congress actually passes a bill declaring it so. But even if these institutions are not defunded, there are two ways that Congress and the Trump administration can tear down federal funding for the arts and humanities in the next several months.

Firstly, Congress could “save” our cultural institutions while still reducing their funding. President Trump’s proposal for complete defunding could give cover to Congress to reduce the funding of these organizations while still claiming to be defenders of arts and culture by arguing they saved our institutions from an even worse fate.

This has happened before: In 1981, President Reagan backed away from eliminating the NEA after a special task force including actor and staunch conservative Charlton Heston urged him against it. But Congress went on to reduce the NEA’s budget by approximately 10%. In the 90s, Speaker of the House Newt Gingrich led a charge against the NEA, the NEH, the CPB, and the National Institute of Museum Services (the IMLS’s predecessor). This effort failed, but Gingrich was successful in eliminating NEA grants to individual artists with a few remaining exceptions, and slashing the NEA and NEH’s budget by almost 40% each. In 2011, the Republican Study Committee proposed ending the NEA and NEH.  That same year, the Obama administration proposed cuts to both agencies, leading to decreases in both budgets over the next three years.

In other words, previous attacks on federal support for the arts, humanities, and public news have been unsuccessful in shutting this support down fully, but they have been successful in chipping away at the edifices of our cultural institutions. We run the same risk today: the NEA and other institutions can be “saved” from the chopping block and still end up having their funding cut. We need to urge not only for continued funding to these important institutions, but for full funding.

Current funding for these organizations—under the 2017 Consolidated Appropriations Act—is an approximate 150 million for the NEA and NEH, 445 million for the CPB (as well as an additional 50 million to replace the public broadcasting interconnection system), and 230 million for the IMLS. Advocates have been arguing that these budgets could use additional increase; Umbrella groups like the Americans for the Arts, for example, have called for Congress to increase the NEA’s budget to $155 million. The Trump Administration’s attempt to destroy these institutions should not dissuade us from arguing that they should be strengthened; on the contrary, it gives impetus for us to re-double our efforts.

But reduced funding is not the only way that institutions like the NEA can be weakened. They can also be sabotaged and weakened from the inside if President Trump appoints new leadership through poor leadership.

We’ve already seen the Trump Administration use this tactic. Scott Pruitt, a lawyer who made his name suing the Environmental Protection Agency, is now in charge of the EPA. Rick Perry, who once advocated abolishing the Department of Energy entirely, is now in charge of the DOE. Betsy DeVos, who believes that private alternatives hold more promise than public education, is Secretary of Education.

The heads of three of these agencies—the NEA, the NEH, the IMLS—are all appointed by the President. They serve four year terms, meaning Trump will have the opportunity to appoint their replacements over the next four years. Similarly, the President appoints all Directors on the Board of the CPB, some of whom have terms ending in 2018. However, President Trump’s first opportunity to change up the leadership of our federal cultural institutions is already before him: On May 22, the day before Trump’s budget proposal was revealed, the head of the NEH, Dr. William Adams, resigned.

President Trump, if he wants to weaken the organization from the inside, could attempt to appoint a new NEH head who does not believe in federal support for the humanities. Trump would have an uncomfortably long list of candidates, given how influential conservative outlets have consistently attacked the NEH for decades. An NEH head who does not value the idea of federal support for the humanities, or an IMLS head who believe that libraries and museums should be privatized, or a CPB head who believes that local radio stations should be left to fend for themselves, would be a disaster.

All these positions may be appointed by the President, but they require confirmation by the Senate. President Trump may propose the replacement head of the NEH soon, and we must watch carefully. An NEH appointee who does not have a demonstrated track record of commitment to the humanities should be seen as a giant, waving red flag. And all of us who value arts and culture need to ensure that the Senate feels the same way.

Save the National Endowments for the Arts and the Humanities: What You Can Do