Dispatch from the 2016 Calabash Literary Festival 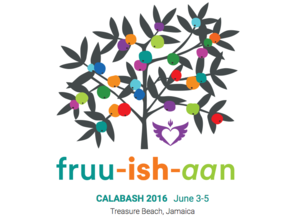 On Sunday, the last day of the 2016 Calabash International Literary Festival, a sweet little delight that had been burrowed in my bag all weekend caught the eye of Teju Cole. The writers were at Jake’s Hotel exchanging goodbyes when Teju whipped out his camera and snapped a photo of the slipper mango, travel worn and tie-dyed with black bruises. Later, he posted the photo on Instagram, making the bittersweet departure into art.

Earlier, on Friday, as I was waiting for room keys after the long drive through the country from Montego Bay, the proprietor and Festival Co-director, Justine Henzell, asked me my name. Down the strip at the opening, with the wind lapping loudly against the tents on the lawn, she pronounced it easily and introduced me to one of the musicians, the son of a musical icon whom I had met years ago. Then, she turned to greet another old friend who had come in from South Africa and as I turned too, he and I laughed. It was totally unexpected, yet not surprising, to run into him here many years since our last sighting. After so many coming and goings, I was truly open to what the weekend had in store for me.

In 2015, when Calabash’s directors threatened to shut down the festival, dedicated fans demanded that it stay alive. I had instantly become part of this community of thousands of devoted festival attendees, and it was clear why. Treasure Beach, on the southwestern strip of beach along Frenchman’s Bay, is a place like no other, and the event it produced is “Yard-seasoned.” The description flies off of Calabash’s website like a “HOT” warning on a bottle of pepper sauce, suggesting an authentic travel experience, but barely hinting at the talent and ingredients that make it that.

Yard-seasoned is not just branding. Calabash makes space for heritage, including local writers and vendors. It offers pit-cooked jerk, salt fish and fried dumplings, and Rastafarian-made ital juices. At the same time, it reaches out to top global literati, writers, and audiences. The fact that so many local and international literature lovers make this pilgrimage is a testament to a community-based tourism approach that blends respect for local culture, unpretentiousness, good staging, refined storytelling, and hospitality in a way that reminds me why more staid literary productions are not my cup of tea.

Presented on a biennial basis now, Calabash seems to be playing for keeps. Saturday’s line-up included Jamaica’s prizewinning Marlon James reading from A Brief History of Seven Killings and Chris Abani, author of The Face and Graceland, reading his “list” essays, powerful in their courageous revelations about fatherhood, West African spirituality, and masculinity. Paul Beatty also read from his novel, The Sellout, a satirical social critique that accosts the justice system and growing up in black in Southern California. That night, several of us found ourselves confiding childhood secrets, eager to share and stretch the boundaries of race, class, and relationships.

Nicole Dennis-Benn, the Jamaican-American author of a new novel, Here Comes the Sun, has described the festival as a rare cultural atmosphere in which not only traveling writers but Jamaicans with access can let themselves go socially. By this account, Calabash has come to represent something much more impactful than a sustainable tourism experiment.

For me, the trip was also another phase of the journey that I had begun in Jamaica’s National Archives as a student decades ago, retracing the steps of maroons and rebels through the hills and across the island’s coast, and learning about the musical and literary traditions that have been a fountain of inspiration for creators around the world. It reminded me that the sweetest things come when you follow your curiosity and surrender to your surroundings. This remembering—and the mangos—will keep me coming back.