Commemorating the Massacre: The Tanks and the People 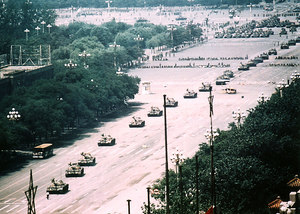 Twenty-five years ago, before the Tiananmen massacre, my father told me, “Son, be good and stay at home. Don’t provoke the Communist Party.”

My father knew what he was talking about. His courage had been broken by countless political campaigns. Right after “liberation,” in his hometown Yanting, they executed dozens of “despotic landowners.” But that wasn’t enough fun for some people. They came back with swords, severed those broken skulls, and kicked them down the riverbank, to float away.

My father never said a bad word about the Communist Party. Even as we suffered through the famine of the Great Leap Forward, when almost 40 million people starved to death, even when I, his little son, almost died, he said nothing. People ate grass and bark; they ate Guanyin Soil, a foul-smelling clay. And if they were lucky, they caught an earthworm—that was a rare delicacy. Many people died from Guanyin Soil, their stomachs bloated. It was hell on earth. My grandmother also died; she was just skin and bones.

Mao’s second-in-command Liu Shaoqi couldn’t help commenting, “So many people have starved to death, history will record this.” We have a saying in China, Disease enters by the mouth, misfortunes come from it. For such criticism, Liu Shaoqi paid dearly. During the Cultural Revolution, he was publically tortured and left to starve to death in a secret prison.

But 25 years ago, in 1989, Mao was long dead. I was barely 30, and I didn’t heed my father’s words. I admired the American Beat generation, their spirit and their actions. I was “on the road.” All through China, in dozens of cities, millions of protesters marched on the roads. Most of them were younger than me, and would never heed their parents’ warnings. Especially “the pride of Heaven,” the university students in the capital who occupied The Gate of Heavenly Peace—Tiananmen Square—for weeks under the watchful eyes of the world, heady with the drugs of freedom and democracy.

But my father’s words came true: the Communist Party opened fire. As the tanks bore down, in a thousand fears, I composed and recorded my poem “Massacre” in a small town in Sichuan Province:

Shoot through their skulls! Scorch them! Let their juice burst out. Let their soul burst out. Squirt it on the traffic bridges, on the tower, on the railings! Let it splatter on the road! Shoot it into the sky and make stars! The stars are running away! The stars are growing legs, running away! Heaven and earth turning around. All humanity wearing shiny hats. Shiny, shiny steel helmets. An army group storming out of the moon! Shoot! Shoot! Shoot! This is great! People and stars falling together. Running together. Don’t know each other. Chase them into the clouds! Chase them until the earth opens, shoot and shoot into their flesh! Make another hole for the soul! Another hole for the stars! …

In the fall of 2012, I published my book Bullets and Opium in Taiwan and in Germany. It’s about the democracy movement in China, and about how the “violent criminals” of June 4, 1989, stood up and fought back against the troops enforcing martial law. The criminals’ weapons were rocks, sticks, and fire—primeval man against the equipment of a modern army. It was in this unfair confrontation that the Tank Man appeared—Wang Weilin, as we knew him. The pictures of his lone, heroic stand traveled around the world. But on that night, there were almost a million unarmed violent criminals standing with him, trying to stop the army.

At first, tanks and armored vehicles broke through the barriers. Then they opened fire. Everybody was screaming. Every shot drew blood; people were mowed down like weeds.

One of the violent criminals who spent nearly 20 years in prison told me, “People in the West only know the Tank Man, because he stood all alone on a big road and stopped the tanks. It was a long column, spouting smoke, like so many farting bugs! Left and right they tried to go around him, but he stopped them. ‘You are made of steel,’ he screamed. ‘I am flesh and blood. Come on down, shithead!’ This scene is historic because foreign journalists recorded it. I heard that even old President Bush cried when he saw the footage. On that night, there were countless people like the Wang Weilin, but there is no footage of them.”

The Tank Man Wang Weilin was not one of the student leaders; he was no intellectual; nobody had ever heard of him. He left behind this short dramatic scene, an indelible historical image seared into our memories. He was led away by the arm, and never seen again. No one knows what became of him.

More than 100,000 Chinese people went into exile after June 4. “Operation Yellowbird” in Hong Kong helped people escape for years. Wang Weilin was never found on any of their lists. The people in my book, the ones who who served long sentences—none of them ever encountered or heard from Wang Weilin. Not in the jails. Not in the prison camps.

My father died in the fall of 2002. The police had searched my home and taken me away in front of him many times. He died worrying about me. I imagine that even in his last moments, when he could no longer speak, he still wanted to tell me, Do not provoke the Communist Party.

Twenty-five years have gone by, and we have all grown old. But in the pictures we see and remember, Wang Weilin is still so young. From far away, his white shirt looks like a lily in summer, pure and unblemished.

Tanks stopping in front of a lily. A historical moment, a poetic moment. And on the other side of that moment, maybe 3,000 lives were taken away, to be forgotten.

Lü Peng was only nine. She awoke in the middle of the night from the gunfire, snuck outside and was hit by a stray bullet. Xia Zhilei was 22. She was a university student from the south. After 4:00 in the morning on June 4, she was retreating from the Square with the other students when shots rang out. She stumbled and said: “Faster! Faster! Look for a place to take a break. I think I’ve been hit.”

She held on to her chest. Blood gushed out from under her fingers. Her girlfriends tore off her blouse and found the bullet wound under her left breast. The blood could not be stopped. It was still dark, and the troops were closing in from all sides. They didn’t know what to do. They picked her up, held her by the arms as she fainted, and on they walked on. Minutes later, she suddenly woke up. Speaking to her friends, she made her last self-ironic joke:

Twenty-five years have gone by, the sound of bullets is far away, the blood has dried. But another wave of arrests has begun.

In May of this year, in the apartment of film academy professor Hao Jian, over a dozen intellectuals gathered for a discussion about the 25th anniversary. Everyone was arrested, and five of them are still being held because of the “severity” of their crimes: civil rights lawyer Pu Zhiqiang; sociologist Xu Youyu; activist and former political prisoner Hu Shigen; blogger Liu Di; and Prof. Hao Jian, whose cousin was been killed in 1989.

If commemorating 1989 in a private home or keeping a counter-revolutionary diary constitute “provoking unrest,” then we have returned to the thought crime era of Mao and the Cultural Revolution.

A few days ago, when I was interviewed in Poland, I thought of the following story:

A married couple was in the act of making love at home. The husband wanted to prolong their pleasure, and so he thought of shouting ‘Long live Chairman Mao!’ to keep himself from climaxing. He shouted louder and louder, hundreds of times. It worked fine; they went on and on. But the walls had ears, neighbors called the police. The police came running and broke in the door. The couple was caught in the act, beaten severely, and treated to prison-camp ‘education’ for four years, all for ‘spreading counter-revolutionary propaganda’.

My translator and the reporter snickered. But then they both thought we should not poke fun in face of the dead of 1989, and of the people who had been recently arrested. The reporter asked, “Mr. Liao, is your story just another tall tale?”

I said, “To commemorate a historical event in your own home, and be arrested for ‘provoking unrest’ – that sounds to me like an even bigger tall tale.”

The reporter asked again, “Mr. Liao, do you think China has made progress, or has it fallen behind?“

I said, “It’s not a matter of making progress or falling behind. China has ‘soared into the sky like a thundering dragon.’”

The reporter said, “I think I understand. But Wang Weilin and the people in your book cannot soar into the air and fly away.”