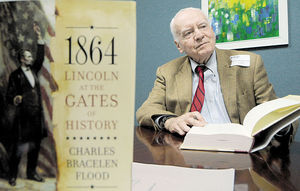 Former PEN American Center President and distinguished novelist and historian Charles Bracelen Flood, 84, died on August 15, 2014, at his home in Richmond, Kentucky after a brief illness. Born in New York City, Flood won early recognition with his best-selling novel, Love is A Bridge, published in 1953, a year after he was graduated from Harvard. A remarkably mature story of the power of love in three lives, it remained on the New York Times bestseller list for 26 weeks and has been reissued in paperback three times. Acclaimed in dozens of reviews, it won the Houghton Mifflin Literary Fellowship award.

The most successful of Flood’s subsequent novels was More Lives Than One—the tragic ordeal of an American soldier captured by the Chinese in the Korean War. Meanwhile, he began displaying equally impressive talent as a non-fiction writer, with a special interest in the Far East. From 1963 to 1965, he taught World Literature at Sophia University in Tokyo. He also spent time as a senior Fulbright scholar in Taiwan. He received numerous special assignments from the Associated Press, such as the Olympics in Australia and Japan. Next came a year as an embedded correspondent in Vietnam—and one of his most controversial books, The War of the Innocents. John Updike said: “this brave and compassionate reporter’s account tells more of the physical actualities and moral complexities of the war in Vietnam than any other book I have read.”

Back in America, Flood turned to America’s revolution. Rise and Fight Again won the New York American Revolution’s Round Table’s Annual Award in 1976, the nation’s bicentennial year. The book tells the story of how the fledgling republic recovered from its many near catastrophic defeats in the struggle for independence. Next Flood turned to the war that disrupted the Union. Lee: The Last Years was a revelatory look at how Robert E. Lee reacted to the South’s defeat. It won the Colonial Dames of America Annual Book Award.

Lee was followed by Grant and Sherman: The Friendship that Won the Civil War. The Washington Post described it as “beautifully defined and explored…a powerful and illuminating story of the military collaboration that won the war for the Union.” Salon.com named it one of the “Top 12 Civil War Books Ever Written.” Even more praise was bestowed on Flood’s 2009 book, 1864: Lincoln at the Gates of History. A prominent Civil War historian said: “Lincoln walks off the pages as in no other book.” In the New York Times, Janet Maslin wrote: “Mr. Flood’s versatility is impressive…1864 compresses the multiple demands upon Lincoln into a tight time frame and thus captures the dizzying visceral sense of why this single year took such a heavy toll on him.”

Equaling if not excelling this praise were the plaudits that greeted Flood’s next book, Grant’s Final Victory—the story of the last anguished year of Grant’s life, during which, while dying of cancer, he struggled to finish his memoirs and save his family from penury. “Flood has chosen one of the great profiles in courage from American history and told it splendidly,” American History Magazine declared.

Flood recently completed The Lafayette Escadrille—the story of the Americans who volunteered to serve as pilots on the Western Front in 1915, before the United States entered World War I. The book, due out in 2015, is a rare combination of heart-wrenching idealism and breathtaking suspense.

Over the years, Flood published many short pieces in The New Yorker, The Atlantic, Esquire, and other magazines. He was also an active member of the literary community. He was president of the American Center of PEN from 1968-70 and served on the governing bodies of the Authors League and Authors Guild.

In 1970, Charles Flood met Katherine Phelps Burnam of Richmond, KY who was then working in Manhattan. They married and moved to Richmond in 1975 and have lived on a farm outside of town since that time. He leaves three children, Caperton, Lucy, and Curtis, and four grandchildren, Connor, Bracelen, Thomson, and Sophia.