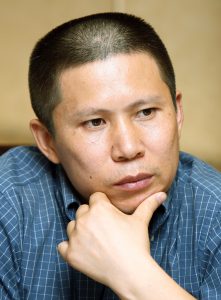 Xu Zhiyong was detained in February 2020 after writing an essay that critiqued the leadership of China’s president Xi Jinping, including his handling of the COVID-19 outbreak, and called on Xi to resign. Xu, an established organizer and lawyer, has been an integral member of China’s most important civil rights movements over the last 20 years. Taken into state custody in a “coronavirus prevention check,” Xu’s detention represents a targeted attack on writers and those who question the social and political status quo. Xu is facing charges of “inciting subversion of state power,” a provision that carries a maximum 15-year prison sentence, and it is widely expected that he will soon be formally charged.

Traditionally bestowed at PEN America’s annual New York City gala (currently rescheduled for later this year), the PEN/Barbey Freedom to Write Award kicks off a campaign of advocacy for the awardee’s freedom. Past honorees include Saudi writer-activists Nouf Abdulaziz, Loujain Al-Hathloul, and Eman Al-Nafjan (2019); and Reuters reporters Wa Lone and Kyaw Soe Oo (2018, freed in 2019). The 2020 PEN America Literary Gala has tentatively been rescheduled to December 8, 2020.

“Xu Zhiyong has guts,” said Suzanne Nossel, PEN America’s CEO. “His essays have served as calls to conscience at pivotal moments in China’s recent history. The one that resulted in his arrest was a detailed, blistering analysis of President Xi Jinping’s blind spots and shortcomings as a leader, published while COVID-19 still raged in China. His detention forms part of a Chinese government effort to control the global narrative about the outbreak, including by disciplining Chinese doctors and journalists who tried to sound alarm bells and punishing critics of the government response to the pandemic. In his writings, Xu has been a persistent voice calling out Beijing’s intolerance for dissent—and campaigning for social equity, rule of law, and a joyful vision for his country’s future.”

In recent years, addressing the dire situation for free expression in China has been one of PEN America’s signature campaigns. With the world’s largest population, and with increased economic and political heft, China’s extensive censorship apparatus limits speech both within and outside its borders. Although new digital platforms have expanded the means of expression, they have also provided more opportunities for repression: In China, even a simple tweet can land its author in jail. Since President Xi Jinping took office in early 2013, he has overseen an extensive crackdown on free speech, implementing additional laws and censorship controls on the internet, media, and publishers. In addition, individual Chinese writers, journalists, and creative artists have been censored, harassed, imprisoned, and even disappeared for speaking out about sensitive topics such as the rights of ethnic and religious minorities, corruption, and the lack of democratic reform. PEN America’s Freedom to Write Index found that during 2019, China held in state custody the largest number of writers and intellectuals in the world; at least 73 were either detained or imprisoned. Read more about freedom of expression in China here.

LI QIAOCHU: I wish he could receive this award in person at this moment. In line with his conscience, Xu Zhiyong has been fighting for Chinese democracy and freedom of speech for many years. I hope that the international community will continue to speak out, not only for his personal situation but also for calling on the Chinese government to honor the rights of citizens granted by the Constitution. Thank you very much.