Micah Fitzerman-Blue and Noah Harpster, writers of the acclaimed biopic “A Beautiful Day in the Neighborhood,” will receive the Award for Screenplay Excellence. 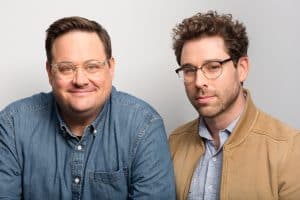 Micah Fitzerman-Blue and Noah Harpster are Peabody Award-winning and Emmy-nominated writers and producers who spent four seasons working on the critically acclaimed Amazon series, TRANSPARENT. Their highly anticipated Mr. Rogers film, A BEAUTIFUL DAY IN THE NEIGHBORHOOD, directed by Marielle Heller and starring Tom Hanks for TriStar Pictures will be released on November 22, 2019. This project originated when Micah and Noah optioned the story and their script landed on the prestigious Black List. The pair also serve as the co-writers of Disney’s upcoming MALEFICENT: MISTRESS OF EVIL, starring Angelina Jolie, and the film adaptation of Jess Walter’s novel Beautiful Ruins for Amblin, with Sam Mendes producing. They are currently adapting Dash Shaw’s graphic novel Bottomless Belly Button, for their feature directorial debut.

Through Blue Harp, the production company they run with executive Karolina Peysakhov, they’ve begun to build out an impressive slate of projects in film and television at FX, Netflix, Amazon, Vice, Syfy, Lionsgate, and Bow and Arrow. Most recently, they signed a first-look deal with SHOWTIME.

Noah is also an actor, known mostly for playing Remy in Tig Notaro’s ONE MISSISSIPPI. He is currently starring in the new Apple series, FOR ALL MANKIND. He grew up in Salinas, California, studied at UCSB and lives in LA with his wife, Robin, and their two daughters.

Micah grew up in Tulsa, Oklahoma, attended Harvard University, and lives in LA with his wife, Liba, and their daughter.