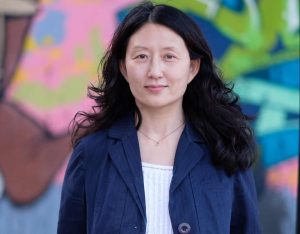 The 2019 Fellows have two months to go and they want to talk about their experience as Emerging Voices, in the hopes that they might inspire other writers in need to apply. Stay tuned to PEN America’s blog through July for this series of essays from T.K. Lê, Dare Williams, Fajer Alexander Khansa, and Anthony Hoang. In this installment, Judy Choi shares what the Emerging Voices Fellowship has done for her.

Are you a writer? Apply to be a 2020 Emerging Voices Fellow through August 1 (PST.) Want more of the 2019 Fellows? Join us for the Final Reading on July 23 at the Hammer Museum.

I was a writer in hiding and sort of still am. I took classes, joined writing groups, went to workshops, and showed a few people my “work.” I need air quotes here because I didn’t get paid to do it. Nobody was sitting in a conference room waiting for me to sign off on it. Nothing—not even one little thing—in the world was gonna fall apart if I didn’t write a short story. And I couldn’t explain it to my eighty-year-old mother without her getting super confused.

“You gotta money for that?” she’d say.

Why do I gotta do that one? I guess because I really, really feel like it. My brain isn’t happy unless I have taken something I’ve seen, heard, or done, and chewed it up and spit it out in a story that shows that we’re all scared, fucked up, and frontin’ and hey, that’s all ok. We’re just people.

PEN America Emerging Voices gave me a place where I could say, “I’m writing a book,” and not feel like a douche. From day one they confirm that you are, indeed, a writer and though I don’t go shouting it from the mountaintops, I have found a space where I feel legitimized as a person of words. This was a big hurdle, mentally and productivity-wise, to overcome—to feel like I can take myself seriously between work, parenting, and washing dishes. Before PEN America, writing was a forbidden luxury, and I rolled my eyes at myself every time I sat down at my computer. But it’s different now—mainly because I am inspired by a cohort of people who are struggling to create and allowing themselves to commit to this messy process along with me. I am not alone in this, and I have help. And the overall community PEN America offers recognizes writing not as a weird ego thing, but as an opportunity to grow, connect, express, learn, support. I’ve met writers who have said things you just don’t say, who’ve strung together words in impossible ways, who’ve made me made me ball my hands up in fists and bite my knuckles. I’ve learned how writers I admire approach the blank page and have been taken through the process. It’s good to remember that as Kimye takes over the universe, there are still people out there writing good shit.

I’ve been inspired and had a chance to get into the nitty gritty of intention, theme, writing paths, and the Oxford comma. (See what I did there?) Halfway in, it has been a phenomenal experience to learn and grow with my other fellows. The feeling of engaging in an intensive project as a group while being guided by kind and talented professionals has been incredible. And there’s usually cheese.

Another big thing: Though some aspects of writing will forever remain a mystery to me, this Fellowship has cleared the smoke around the business of writing. I used to view the literary world as an abstract entity where maybe things just happen or they just don’t. Now I know how to move forward, take steps. I know how to finesse a submission and how to talk to people about my work without feeling like I’m going to burst into flames.

Emerging Voices introduced to me a world where writing is core, not vanity. Maybe a little vanity—but way more core. It has been a terrific reminder that, through words, other people exist—in pain, pleasure, confusion, vigilance, humor, and compassion.

“I Started to Write the Way I Needed To”: An Essay by 2019 Emerging Voices Fellow T.K. Lê

“These Are the Stories I Want to Tell”: An Essay by 2019 Emerging Voices Fellow Fajer Alexander Khansa

“Leaving The Light On”: An Essay by 2019 Emerging Voices Fellow Dare Williams