Your Students … Or Your Customers? 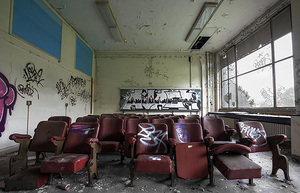 An immigrant from Soviet Russia, Nina Kossman formerly taught in New York City public schools. This piece is the first chapter of her memoir-in-progress, Once Upon a Time a Teacher. Her published work includes the poetry anthology Gods and Mortals (Oxford University Press) and Behind the Border (HarperCollins), a collection of autobiographical vignettes for young readers about growing up behind the Iron Curtain.

For three days I played the part of a subordinate with almost perfect pitch, which was both easy and hard: easy, because all I had to do was sit and look in the general direction of the presenters, and hard, because the presenters were boring, like the one who is now reading aloud from a handout titled “Common Core-Aligned Task with Instructional Supports.”

“We have learned through our Common Core pilots that beginning with rigorous assessments drives significant shifts in curriculum and pedagogy.”

“Rigorous” is a key word in this sentence, she says, and now we are going to watch a brief video about rigor. She turns off the lights and the word “rigor” appears on the screen, followed by a doll, apparently a principal. In the next scene it walks into a classroom full of students. Another doll, dressed as a teacher, is pointing at rows of questions on the board and waiting for student responses. When the teacher grows exasperated and dismisses the class, the principal doll steps in and informs the teacher doll about the importance of rigor. The principal doll is speaking with an English accent and sounds as prim and proper as a British headmistress confronted with the inadequacies of the American school system. “Rigor,” repeats the headmistress doll, “You must apply rigor.” The American school teacher doll asks, in her blunt American accent, “But what is rigor?”

When the lights go on again, the presenter echoes the teacher doll’s question. “What is rigor?” she says significantly. “Reading skills of American students are ranked far behind many countries in the World Education Rankings. Many of us have been asking why. In our search for the answer we found rigor.”

She pauses and looks around to see if there are any hands.

I want to ask her, Did you use a computer program to list these words in alphabetical order? Do you think that, instead of teaching children to enjoy reading for its own sake, teachers must make them apprise, assess, construct, infer, and differentiate? My hand goes up, but I overrule it and order it down, because I know that the presenter will respond to my “enjoying reading for its own sake” as to an antediluvian worldview, too naive to be taken seriously.

The presenter is saying that our task is to find the correct level for each child, and then to help the student choose reading-based activities from each level.

“In other words, know your customer,” she says.

Customer. This word is the last straw. I can’t keep my hand down any longer. As if it’s not enough that I raise it, I wave it like an eager child.

“Students are not customers.”

There is a moment of silence. The presenter is not used to handling controversy. She is used to captive audiences that sit mutely through the assigned hours because our paychecks depend on our good behavior. Our group’s fear is obvious in the stiff postures of the other teachers who are trying not to look at me. The silence drags on.

“It really matters, this word ‘customers,’ because if we think of students as customers, we’re allowing the market mentality to take over education. I’m sure that in the countries that are ranked ahead of the U.S. in education, the market doesn’t dominate education as it does here. If we want to be ahead of other countries in education, the first thing that should go is this business mentality, this thinking of our students as our ‘customers.’”

The presenter says, “In those countries scores are high because only a percentage of the population gets educated.”

This is almost too easy to parry.

“In most of those countries there is a 100% literacy rate, which is a higher percentage than here,” I say.

My supervisor appears from the corner where she has been standing for a long time, observing us, ready to pounce on anyone who seems to be falling asleep or whispering to a neighbor.

“This is a democracy,” she says proudly. “Here we educate everyone.”

“Finland is a democracy,” I say. “And so is South Korea. And so are most of the countries whose scores came out higher than ours.”

My supervisor repeats, “This is a democracy!”, and for a moment I wonder if she knows where Finland and South Korea are on a map, let alone whether they are democracies or dictatorships. I’ve had many fights with Serenity and I know what to expect: a threat of a disciplinary action, a letter in my personal file.

I decide to drop it, but at that moment one of our teachers leaves her seat on the other side of the room and rushes towards me. She waves the handout and points at the circle divided into four Depth of Knowledge levels. “And in the old country, in the country you come from, where you say everyone can read so well, can they do this?” she points at “Prove”. “And this?” She points at “Apply concepts.” “And this?” she points at “Synthesize”, “Connect,” and “Recall.”

“This has nothing to do with learning to read. The only purpose it serves is to give jobs to presenters so they have something to fill the time with while pretending to teach us how to teach.”

I thought I was whispering but suddenly Serenity is standing between me and Miriam. Serenity is tall and broad and she completely blocks Miriam. She orders me to step outside and, brave as I am, the thought of disobeying my supervisor doesn’t cross my mind. I follow her out of the room and subject myself to her scolding.

“You think you’re so smart, you challenge the presenter, you ask questions—”

“Why can’t we ask questions?”

I don’t react to this order, because I’m well aware that I can’t go home in the middle of a workday. I still need this job, after all.

“No more speaking to the presenter. This is a professional development session!” Serenity is breathless with indignation. “I’ll put a letter in your file.”

When I’m back in my seat, Victoria turns to me and says, “’Customer’ was a figure of speech.”

I’m still thinking about Serenity and the way she said “Go home!” and “I’ll put a letter in your file!” I’d like to ask her: if this is a democracy, then why does she speak this way to teachers?

Victoria turns to me again. “She used ‘customer’ as a figure of speech, and you started this whole thing with her.”

“I know she doesn’t think of students as actual customers, they’re not paying us. But it matters which figures of speech we choose to use, and the fact that she chose this particular one, says something.”

“You started this whole thing!”

“I just wanted to say that education shouldn’t be handled as a business. I took something she said to show her that our thinking about education is so permeated with market mentality that we use figures of speech that belong in business, not in education. And maybe that’s why we’re behind other countries. Not because we’re a democracy and they’re not.”

“So, we’re behind other countries because we use particular figures of speech?”

“No, we’re behind because instead of education being a field where everyone honestly thinks of what will actually benefit students, it’s a place where all that everyone cares for is their own profit. We do whatever we’re told, no matter whether it’s bad for teaching, and we sit quietly though these p.d. sessions, no matter what the speakers say, because by being quiet we get our little paycheck. And the presenters talk all day long in front of captive audiences because this is how they get their paycheck. And our supervisors invite speakers to our p.d. sessions knowing that their topic has nothing to do with what we actually do in our program, because they care about their own paycheck and so they do whatever their supervisors tell them, and so do their supervisors, everyone thinking about their little dollar, and the companies about their big dollar, and that’s why we get these hundreds of boxes filled with materials we can’t use—”

The presenter announces that we’re going to analyze a piece of student writing in terms of the four “DOK” levels. Everyone is obediently marking their handouts. Arguments, anyone? Go home.

PEN America's Eurasia program director @PSadovskaya2020 joined @TLHumanRights for a hearing today on the state of human rights in Russia and offered recommendations to Congress in addition to giving her testimony.