The Other America: Black Lives and the Police State 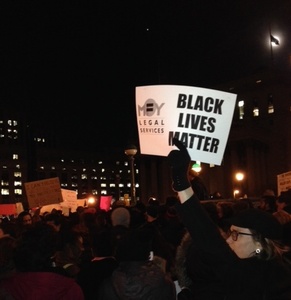 Hell’s Kitchen, NYC – As I write this, helicopters hover overhead, and the West Side Highway—a block and a half from where I currently sit in Manhattan—has been shut down. Protestors have organized a “die-in” in response to a Staten Island grand jury’s failure to indict yet another white police officer for his actions in the death of an unarmed African-American man, Eric Garner. Garner died in June as a result of a chokehold, a move that had been banned by the New York City Police Department for several decades.

With the deaths of so many black Americans at the hands of both police officers and white vigilantes who have escaped punishment, we are coming to see that two Americas exist. One America is a democracy, where people enjoy the vote and the rule of law, where they can gather freely and without fear, and engage in protests like the sometimes-rowdy town halls against health care reform back in 2009. The other America is a place not unlike the Chile I saw under the Pinochet dictatorship, when I was researching Gringolandia and Surviving Santiago, or under the Franco dictatorship in Spain, where I spent a semester abroad in high school. In those dictatorships, people feared the police and the army. The government existed not to serve the people, but to control the people, and the police and the people knew well that they were on opposite sides. People learned to show deference to the police, for any encounter could lead to arrest, a beating, disappearance, or death. This “other America” has increasingly become the reality for African Americans, immigrants, and anyone suspected of being an immigrant. If you are a white parent, you probably haven’t had to explain to your child what Terrence, protagonist Jarrett’s stepfather in Coe Booth’s outstanding middle grade novel Kinda Like Brothers (Scholastic, 2014), tells the preteen boys at the community center after police stop and rough up another volunteer:

“Let me keep it real with you guys,” he said. “When y’all get a little older, you’re going to be stopped by the police. A lot. I’ve been stopped so many times, for nothing. Just because of the way I look, because I’m a black man. The same thing happens to my Puerto Rican and Dominican buddies.”

“That’s not fair, though,” Hector said.

“I know,” Terrence said. “And you kids need to do what you can to change things.”

I shook my head. “We can’t do anything.”

“There are a lot of ways to get your voices heard, Jarrett, even as a kid. You can write letters to the mayor, you can protest, you can talk to adults who vote.”

“It’s not gonna do anything,” Ennis said. “The cops always think we’re doing the wrong thing. All the time.”

Me and Kevon looked at each other. I had never seen Terrence like this. What he was telling us was important. I could feel it.

Terrence spent the rest of the Man Group telling us how to act when the police stopped us, even when we weren’t doing anything wrong. He said we had to keep our mouths closed and only tell them easy things like our names and addresses. If they accused us of anything, the only thing we had to say was, “I would like to call my mom or dad.” He said we didn’t have to answer anything till we had an adult with us. That was the law, so the police couldn’t try to trick us into saying something.

Then we practiced. Terrence played the cop, and we had to show him we knew what to do and wouldn’t get mad and give the police any reason to arrest us.

Terrence was serious the whole time. He said what he was telling us was a matter of life and death, and he meant it. (pp. 81-82)

Let’s think about this. Jarrett, Kevon, Ennis, and Hector are learning how to survive in a police state. Worrying about whether the police will stop you for no reason, and how you have to act so they maybe won’t hurt you or kill you, is a source of constant stress—as it is for people living in dictatorships who worry that they may get caught for stepping out of line, inadvertently step out of line, or be mistaken for someone who stepped out of line. In many ways, it’s even worse if you live in a place that’s supposed to be a democracy, and you see that other people don’t get hassled or threatened by the police—people who enjoy a security and rule of law that you don’t have.

The killing of unarmed black Americans by police who don’t get indicted and white vigilantes who don’t get convicted is a human rights issue that should concern everyone in the United States and around the world. So is the mass incarceration of black and brown Americans as a result of draconian and racially biased drug laws and the subsequent disenfranchisement of those convicted of felonies. So are current efforts in many states to remove black and brown voters from the rolls and to demand forms of voter identification that are expensive and time-consuming to obtain. When I speak to student groups about human rights, I say that this is the treatment we should expect because we are human. Our lives matter; our dignity matters; our thoughts and beliefs matter. We shouldn’t have to remind anyone that black lives matter. Or brown lives matter. But unfortunately we do. And it’s our job to bring about change so that everyone can live in peace and dignity, without fear that officers of the State will target them and every encounter may be their last.