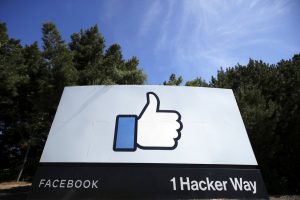 In this April 14, 2020 file photo, the thumbs up Like logo is shown on a sign at Facebook headquarters in Menlo Park, CA. Photo by AP/Jeff Chiu

The Oversight Board, an independent entity established by Facebook, issued its decision Wednesday on the suspension of Donald Trump’s Facebook and Instagram accounts. The Oversight Board affirmed Facebook’s justification for the suspension but objected to its “indefinite” time frame, and referred it back to Facebook for reevaluation within six months. In the meantime, Trump’s accounts remain suspended. In the context of global free expression debates, the Board’s decision and accompanying recommendations raise the visibility of longstanding and important issues regarding how Facebook responds to abusive speech from world leaders.

PEN America agrees with the Oversight Board that Facebook’s suspension of Trump’s accounts was warranted, given his clear violation of Facebook’s community standards and the immediate threat of violence on January 6. We also agree with the Oversight Board that Facebook erred in essentially inventing, on the spot, a new penalty of “indefinite suspension.”  Rules should stand beyond the case in question, and the precedent of an account suspension unbound by standards, time, or opportunity for review raises particular concern. The Oversight Board rightly decided it was not its place to make those rules, but instead told Facebook that it needed to establish them.

Alongside its decision, the Oversight Board provided recommendations for improvements to Facebook’s approach going forward. It urged Facebook to develop new policies regarding novel and emergency situations; to assess its own role more broadly in permitting and amplifying the false narratives that led to the January insurrection; and to increase the transparency of its reporting on how and when it penalizes violations of its community standards. Here, PEN America again largely agrees with these recommendations, which—if implemented—would represent progress in Facebook’s efforts to balance the protection of free speech rights against the threats of violence, disinformation, and hate.

The Oversight Board’s decision on Trump does not, however, lay to rest the question of how Facebook should deal with political leaders—or as the Board broadened the frame, “influential users”—who take to social media to do harm. Establishing clear policies on these questions is Facebook’s responsibility, as the Board made clear in its recommendations. That responsibility is nevertheless an urgent one given the public interest both in keeping the speech of public officials accessible online whenever possible and in addressing the abuses that occur on Facebook’s powerful platform. PEN America believes removing political leaders from social media platforms should be done only with the most sober assessment; there is unique value in hearing directly from such figures, even when their words are heinous. Social media companies should not be, or appear to be, blocking officials for arbitrary reasons or to be acting only in the exigencies of a crisis. Facebook needs to set out the grounds for acting to constrain these singularly important accounts; ways to evaluate the harms caused; and methods for applying, reviewing, and appealing these actions, and ensure there is transparency around both the policies and the process.

One of the Oversight Board’s most far-reaching recommendations is that Facebook examine its “potential contribution to the narrative of electoral fraud and the exacerbated tensions that culminated in the violence” on January 6.” The Board called for “an open reflection on the design and policy choices that Facebook has made that may allow its platform to be abused.” This recommendation could mean a review of Facebook’s fundamental product strategy and business model. We hope Facebook will not ignore this recommendation, but we are not optimistic given that the Oversight Board asked Facebook for information in this arena during its deliberations but was denied and it has no power to force the issue now. Here the Oversight Board confronts the limitations that many critics point to in questioning its utility; it can raise important questions but cannot compel answers or ensure sufficient transparency and accountability. None of us can afford to get confused on that point.

Contrary to Facebook’s claims in referral of the Trump case to the Oversight Board, the events of January 6 were neither unprecedented nor unpredictable. It was far from the first such crisis globally—countries from Myanmar to Uganda to Belarus can attest to the toxic mix of anti-democratic politicians, social media platforms, and violence—and certainly won’t be the last. Facebook is obligated to respond to the Oversight Board’s recommendations publicly. It should go beyond that, and we must hold it accountable for meaningful and transparent action.