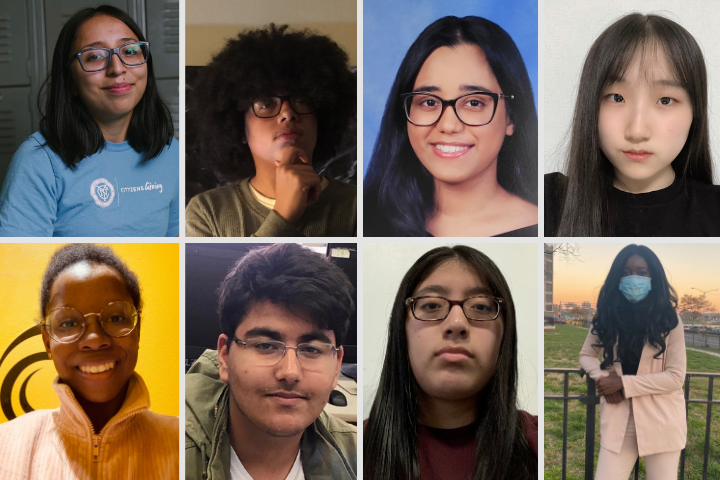 Since 2014, Carol Cooper, a member of PEN America’s Writer in the Schools program, has been serving as an advisor to the Newspaper Club at the Manhattan Center for Science and Math. The club, in turn, produces Rampage, the MCSM newspaper. Rampage has been operating without interruption throughout this year of remote schooling, reporting on school news as well as the Black Lives Matter movement and such exotica as how to build an online currency converter. Earlier this year, Enlik Tagasheva, a Rampage sports reporter, was named co-recipient of an annual Newsie award given by Baruch College’s New York City High School Journalism Program.

James Traub, founder and director of Writers in the Schools, interviewed members of Rampage’s staff. Below is a condensed version of the discussion:

“I’m a senior now, but I joined the Newspaper Club as a freshman. I was an introverted kid, and now I find myself leading the meetings. It’s definitely been a great experience of growth for me. When I was assigned the post of editor-in-chief, one of my major goals was to see how we could have members of the staff work together as best they could under the circumstances. Even though we haven’t been able to meet in person, the work we’ve done together has allowed us to create bonds of friendship. We’ve had Game Night and Movie Night where members of the club can join the school staff to play video games or watch movies and talk about what they meant. We’re also planning to have a staff meeting to give our members a chance to get the print editions we’ve done and also to pick up our t-shirt and team jackets. Our principal loves Rampage and the work we do, and he’s raised money so that we can buy jackets. You have to have five or more published articles to get a jacket–but everyone gets a t-shirt.”

“I’m a sophomore, but I started the Newspaper Club as a scared freshman. The newspaper gave me a chance to express myself. I’m really interested in political journalism. Every morning my Mom has MSNBC on. I watch CNN and other channels and compare the way they cover the news. I get the New York Times delivered to my email. I wrote a piece when our school decided to return to in-person learning. I attended the town hall meeting where they explained how they would manage students in the hallway and so on. They were scared, and we were scared. But overall they’ve done a good job of keeping everyone separate and safe.”

“During this time when we haven’t been able to have contact with each other, everything kind of builds up. I always have so much to say, so having the Newspaper Club has been a great outlet; otherwise, it’s just friends and family who hear me rambling. As a black person living through the Black Lives Matter protests and the Trump era, you see people like yourself going through such hard times. But there’s also a lot of hope and enthusiasm. I like to think not so much about what happens to you but what we do in response to what happens to us. I think now people have a focus on bettering themselves and on being more empathetic. I tend to be more optimistic.”

U Sein Win is the fourth poet in Mynamar to be killed in recent months. At least 32 writers and poets are in detention, according to PEN International. https://bit.ly/3tSBOl5

Chinese writer & scholar #XuZhiyong has been detained for more than a year by the #CCP for writing the truth about Xi Jinping’s mishandling of the COVID-19 outbreak. His fiancé #LiQiaochu has been detained as well. They should be freed immediately. #ExpressionNOTOppression