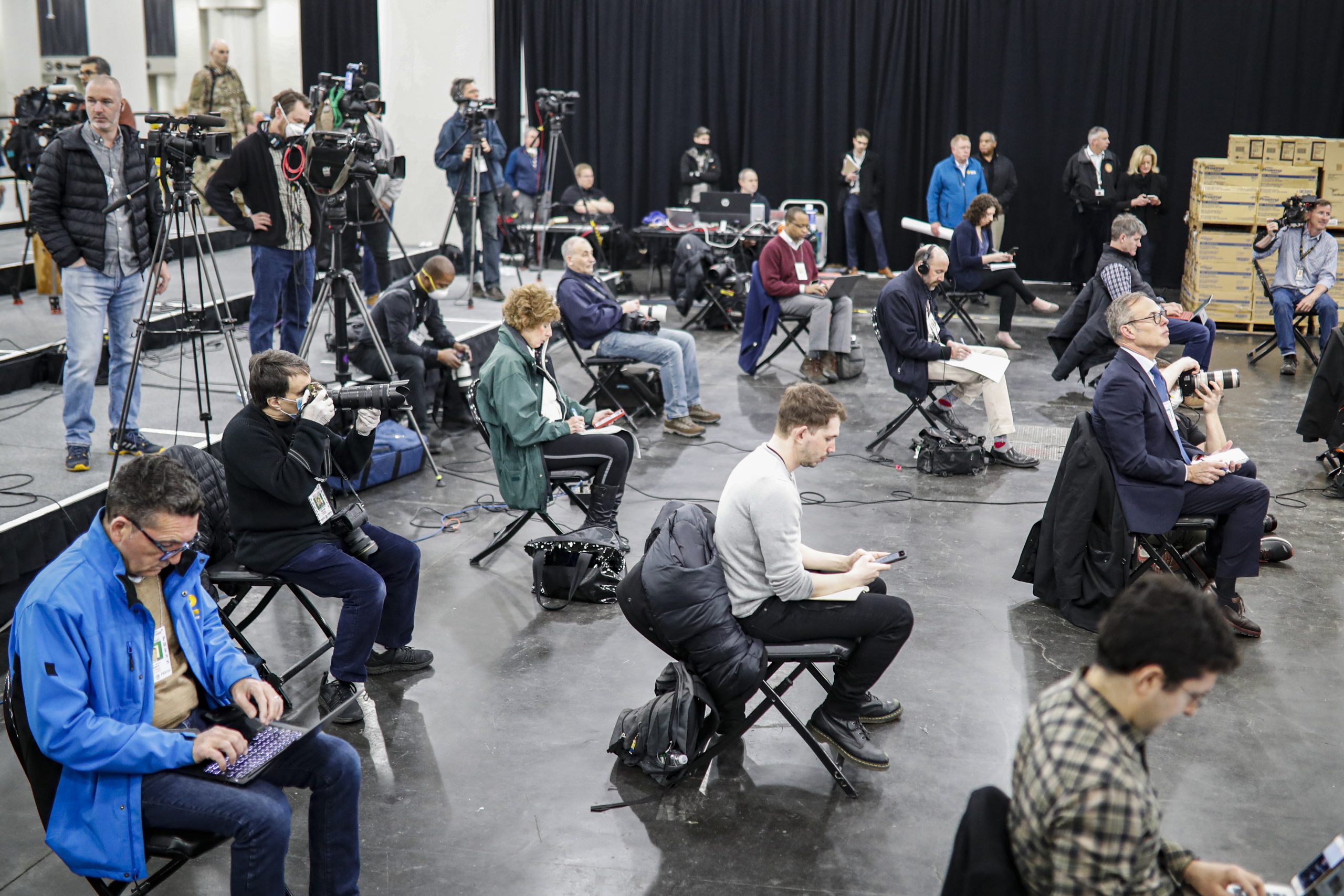 In this March 24, 2020 photo, journalists practice social distancing during a news conference with New York Gov. Andrew Cuomo at the Jacob Javits Center that will house a temporary hospital in response to the COVID-19 outbreak in New York. Photo by AP/John Minchillo

This piece was originally published by The Thought Project, a blog at The Graduate Center, CUNY that publishes pieces by students and administrators about their research and scholarship.

Worldwide, some two million people have died as a result of the coronavirus, and among that toll, at least 500 journalists and media professionals. While the pandemic has had outsized impact across the economic and health sectors, the effects on journalism — and specifically local journalism — have been profound, not just in the tragic loss of life but also the loss of reporting at the local level. Stemming the loss of local news sources should be a top public policy priority for lawmakers on the federal level. At a time when people have become ever-more dependent on the press as a source of legitimate, trustworthy information about politics, health, the economy, and the world, this loss poses a serious challenge to open dialogue, free expression, and democracy itself.

Last month, the literary and free expression group PEN America (where I work) published my web project, Journalism and COVID-19: The Toll of a Pandemic, which also served as my independent study project in The Graduate Center’s Interactive Technology and Pedagogy (ITP) certificate program. The project examines the toll of the current coronavirus pandemic on journalism in the United States from March to December 2020 — the first 10 months of the pandemic. Related losses have been noticeably striking in three areas: media personnel whose lives were tragically cut short by the virus, newsrooms implementing cutbacks that affect their coverage and access to news events in the communities they cover, and free press threats as a result of the coronavirus outbreak.

Among the journalists who’ve succumbed to the virus and whom the project pays tribute to: Alan Finder, former reporter and editor for The New York Times, whose son described him as “a career journalist who believed deeply in the power of the written word and the urgency of truth”; Theodore Gaffney, most well-known for photographing the Freedom Riders’ journey for Jet magazine, who TIME staff wrote “ended up with a front-row seat to one of the most significant events of 20th-century American history. . . [and] was there to capture it all”; Maria Mercader, director of talent strategy at CBS News and also a cancer survivor, whom CBS This Morning co-anchor Anthony Mason described as the “organization’s heart, soul, and spirit.”

The pandemic has also accelerated well-documented newsroom losses that have been trending for years (see PEN America’s 2019 report, Losing the News). With advertising revenue plummeting as a result of the pandemic’s impact on businesses, newsrooms have been forced to make cost-cutting measures including furloughs, layoffs, pay cuts, reduced hours, etc. Inevitably, the lives and livelihoods of those who power the newsrooms — the journalists themselves — are impacted.

In the project, I focused on five states with among the highest number of affected newsrooms. California sits at the top of this grim milestone with more than 30 newsrooms affected, from local radio stations KPBS and KQED, to nationally recognized newspapers The Mercury News and Los Angeles Times. Mel S., a KPBS staffer, wrote about the significant distress they experienced as a result of the station’s reduced hours:

I moved to San Diego when I was 25 years old to take a job at KPBS. Today I am 45 and have dedicated my whole heart and self for 20 years. As of July 1, my hours will be cut in half, rendering me unable to survive in this pandemic job market. https://t.co/WqlgCsXUYS

Mel’s experience echoes those of many other journalists. While an exact number of negatively impacted journalists will require further research, Axios reported that more than 11,000 newsroom jobs were lost through the first six months of 2020.

Local news outlets, like many struggling businesses, may receive some relief soon. A prominent storyline as of late is the $900 billion COVID-19 relief bill that was recently passed in the U.S. Senate. Discourse over the bill was largely about the $600 checks that went to struggling Americans, but the package also included a measure that will help local newspapers as well as television and radio stations. The measure made these local outlets eligible for the Paycheck Protection Program, which may serve as a temporary stopgap and help stymie the bleeding. It’s a good first step, but more action needs to be taken particularly at the federal level; PEN America has recommended that Congress consider robust public financing for local, investigative journalism. It’s been more apparent than ever, during the pandemic, that newsrooms play a vital role in the public’s decision-making — and likewise, the government relies on them for coordinated efforts around actions that can help curb and end the pandemic.

In even more ways, we can see journalists’ lives and livelihoods at risk during the pandemic. My colleague, Summer Lopez, wrote back in March that “journalists are first responders too.” As first responders, in a sense, journalists run the risk of catching COVID-19; this was evident in the earliest days of the pandemic when Chinese journalists exposed themselves to the virus, which hadn’t even been identified yet. Lopez also foresaw what was still to come: the role of journalists as truth-tellers during a public health crisis, as well as the challenges and risks journalists would face while reporting about the coronavirus outbreak. The U.S. Press Freedom Tracker recorded that in 2020, more than 300 journalists were assaulted and more than 100 journalists were arrested or detained.

As I detail in Journalism and COVID-19, press freedom violations directly related to the coronavirus outbreak have included attacks and harassment of reporters, censorship of divergent opinions, denigration of the role of the press, restrictions on information, and risks to safety. Unsurprisingly, the Trump administration — well-known long before the pandemic for their antagonistic view of the press — was responsible for many of the free press threats, ranging from warning that any negative coverage by the media would delay the coronavirus vaccine to blocking CDC officials from testifying on the reopening of schools. With the new Biden-Harris administration, the hope is for trust in the press to be restored and attacks on journalists to cease. Rejuvenating journalism after it’s been nearly irrevocably damaged over the last four years, however, will require significant action by the new administration along with grassroots movements and concerned citizens to hold the administration accountable.

It’s a new year, and there’s hope on the horizon with vaccines and a new presidential administration. But the pandemic is far from over, and it’ll continue to affect one of the most important institutions making up the fabric of our democracy. There might be no more important time for journalism, and the lives of the individuals reporting on the front line must not be forgotten.

Sandy Mui is the digital communications coordinator at PEN America and a student in the M.A. in Liberal Studies (MALS) and Interactive Technology and Pedagogy (ITP) programs at The Graduate Center, CUNY. Her project, Journalism and COVID-19: The Toll of a Pandemic, was published at PEN America and served as her independent study project for The Graduate Center’s ITP program.

Journalism and COVID-19: The Toll of a Pandemic