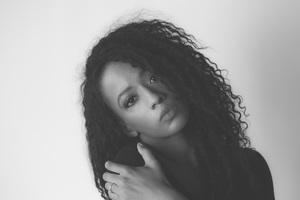 The PEN Ten is PEN America’s weekly interview series. This week, guest editor Natalie Diaz speaks to poet and visual artist Rachel Eliza Griffiths. The recipient of numerous fellowships including from Provincetown Fine Arts Work Center, Yaddo, Vermont Studio Center, Millay Colony, and Cave Canem Foundation, Griffiths is the creator and director of P.O.P (Poets on Poetry), a video series of contemporary poets featured by the Academy of American Poets. Her most recent collection of poetry, Lighting the Shadow, was published by Four Way Books in 2015. Currently, Griffiths is working on her first novel and lives in Brooklyn, New York.

Rachel Eliza Griffiths is an artist, a sister, a teacher, an energy I carry close to my heart. A mysterium is something that requires you to close your eyes and your mouth, so that you can finally see and know. She is my mysterium—her poems and images take me into the labyrinth of grief and joy, into the river and light of the body. It is my luck to hold her in my circle of beloveds and to imagine witnessing the beautiful things she will build in our world.

Near any body of water. Including my bathtub.

Women’s lives, women’s words, women’s work, and women’s bodies in all forms, (re)incarnations, fragments, and arguments.  Black women in white dresses. Mexico. Art. Melancholy. Beauty. Root beer floats. Desire. Tattoos (I want to get one to celebrate my Mom’s life). The Harlem Renaissance.  Nina Simone and James Baldwin, always. Death —though I shouldn’t write it down as the very first thing, oh well, so now it’s the last thing, which makes sense.

Oh, the superlative doesn’t work for me. Every time I sit down to write I dare the universe. I dare my own death. I dare my 26 horses into syllables and we take off. I’m aware of the risks—everything that my silence would keep hostage rears before me.

My mother died in July. She was/is one of the greatest loves of my life—this is something that defies (and will defy) time, memory, and distance in the work I create.  I’m trying to write about this greatest love and tidal grief, because it isn’t over—our love —despite her death. The ways words are happening to/in/despite me—what I’m saying and hearing—is altered, forever. So the afterlife here is neon now, the grief.

Maybe, it’s to navigate the spaces of citizen and solitude in an organic way. Writers— like so many groups of people—are not monolithic. So, for myself, the responsibility is a hydra-headed practice of witnessing and action. That means accountability—to a greater world and to, especially, my own spiritual ecosystem. No matter how inward or outward my gaze, no matter how unbearable and impossible, I must try to keep my hundred eyes open and my thousand hands open, translating, transcribing, and making offerings wherever I travel, even if it’s only my own interior.

I acknowledge (in some realm I do not inhabit) that the public intellectual has fallen out of fashion—but for whom? Not me.

Fashion is a fickle, titillating, sexy, and inexplicable creature that often circles back and forth, devouring and then regurgitating itself. When enough people are tired of wearing bankrupt attitudes and pimping ideologies that lack sophistication (and humanity), the public intellectual will still be in style for me. Style and fashion aren’t the same thing.

The body is political, especially for women and people of color. Sound and language begin as energy in the body. How do you inhabit or understand your body when you read and/or write?

Language is such a fire. It’s difficult and necessary and maiming and magnificent. I don’t have its wings, but through literature I have experienced flight over and over. Words and vocabularies also graze my body with wildfires that have taken years to extinguish. It’s getting better (sort of) but the charring and burning is still going on and people are walking around in flames with alphabets in effigies. Sometimes, unconsciously, I’m the one doing the burning (to my own self) but most of the time that destructive energy is coming from elsewhere. I exist in the earth of my own gaze and it’s abundant here. It’s enough. My body is sacred, mysterious, beautiful. Mine. It is the body of a survivor. In its own flesh and upon the page, my body has experienced deep pleasure and deep violence. When I think of my own body and the ways in which language speaks for, to, or against me, I think of Lucille Clifton’s words, “What they call you is one thing. What you answer to is something else.”

We all have a language and system of images that are our own, that were built into our lexicons from the fragments and musics of places and people we come from. What is a word or image that haunts your writing or that you find yourself revisiting, and what does it mean to you, what or where of your life is it made of?

The way music happens inside of me is one of the most meaningful elements of how I create. I find music everywhere—through musicians, of course, but also in rain, insects, the way a person walks, the wind sifting through lungs during sleep. My poetry, prose, and photography are lyrical. They require open spaces. My hauntings are lifelong meditations, connected and collapsed within the past, present, and future.

The contrapuntal thing is that silence is as significant, as melodious, to me as the music is. As a writer, sound surfaces more as part of my lexicon than with my visual work, which also engages sound. How does one incite music, the sense and the perception of it, in a two-dimensional photograph, or even through the textures of a painting? I mean Romare Bearden could do that.

As a visual artist there is an entire visual vocabulary that drifts through me.

The imagery is too private for me to say anything else about.

A few years ago, I was handcuffed for several hours before being released. It wasn’t official but I can’t discuss it yet.

I’d need to send a swarm of books! I think I’d start with Frantz Fanon’s The Wretched of the Earth, which would mean I’d need to go back to Aimé Césaire. Next to these two elders, I’d insist that this “leader” check out Edwidge Danticat’s Create Dangerously and Chimamanda Ngozi Adichie’s “The Danger of a Single Story.”

The relationship between the observer and the object of the observer’s gaze reveals so much about who is central as the “authority” and who is on either side of the lens. I like the sentiment of Toni Morrison’s words, “If you’re going to hold someone down you’re going to have to hold on by the other end of the chain.”

Go beyond the “bodies” at stake in this relationship and it’s also about the line itself. The “line” is Pigment. Intention. Suspicion. Imagination. Fear. The “line” is also about Currency, in regards to resources, individuals, and institutions.

The visual concept of a “line,” insofar as this question asks us to consider the lateral and vertical forms of these words, is problematic—because it’s a construct of binaries that requires the internalization of supremacy of some kind (i.e. religion, race, ethnicity, economics, gender, etc.). It means privilege and poverty. It means native and immigrant. Alien. It means ours and theirs. It means innocent and guilty. But relationships are often more plural in construction, in a sense. So surveillance and observation also carry some notions of the authority amongst individuals and groups, and a perceived threat (whether the threat is true or imagined is irrelevant once these roles are employed). The relationship of these words often occupies a tense geography. It’s the sort of boundary-making that is the most devastating and dangerous.

Natalie Diaz was born in the Fort Mojave Indian Village in Needles, California. She is Mojave and an enrolled member of the Gila River Indian community. She is the author of the poetry collection When My Brother Was an Aztec. Her honors and awards include the Lannan Literary Fellowship, a Native Arts Council Foundation Fellowship, a USArtists Ford Fellowship, and a Princeton Hodder fellowship. Diaz splits her time between Princeton and Mohave Valley, Arizona, where she works to document and revitalize the Mojave language. For the PEN Ten, she’ll be interviewing writers whose work is a war-cry and who are also fierce supporters and champions of women writers and writers of color.