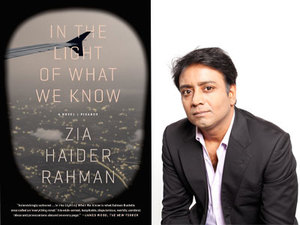 Zia Haider Rahman’s debut novel, In the Light of What We Know, was published in 2014 to international critical acclaim and won Britain’s oldest literary award, the James Tait Black prize.The following piece was solicited by the Bangladeshi newspaper Prothom Alo and published in Bengali on November 6, 2015, and in English on November 7 by The Daily Star. It is reproduced here by permission of the author.

I have been asked to write a few words about my experience, with the purpose of offering inspiration to young Bangladeshis. But my personal history seems to me so particular as to be of little use to anybody: for one thing, although I was born in Bangladesh, I grew up mainly in the West. Nevertheless, since I’m an obliging sort of fellow, I’ll try.

These are the conditions that enabled me to produce a novel that was very well received: socialized and comprehensive healthcare, decent education, housing, water and sanitation, good libraries, a sufficient diet, street lighting and public transport. Others in the West have had the same, you might say, but not everyone does well. Perhaps, then, I should add a few more things I did not earn or choose: I had a half-decent brain with an insatiable curiosity and doggedness that can be irritating even to those who love me. To deny that I had gifts is implicitly to condemn people who do not have them. It seems to me absurd that so many of us have accepted bare meritocracy as sufficient for justice, when in reality it means consigning people to lives of quiet desperation simply for the failure of being born with meager talents.

There is of course that matter of hard work and perhaps I should extol the merits of labor. But millions of Bangladeshis work hard; they work harder than I will ever know. And they work to make ends meet, for subsistence, for survival. I for one can imagine nothing more obscene than to hear me say that working hard is the key to success.

Yet there is still one condition—an important one—that enabled me to flourish and allowed the novel to find its audience. Let me take a step back in order to explain.

Since April 2014, when In the Light of What We Know was published, I have had a stream of messages. Judging by those messages, more than a few readers have appreciated the novel’s political qualities. Through its cast of characters, the novel contains critiques of power and elites. Some of my correspondents have asked if I modeled certain characters on real world figures, identifying particular individuals. The book contains explicit references to Hamid Karzai, Pervez Musharraf, and others, but it also includes fictional characters inspired by real world people, including British establishment figures. Soon after the novel was published, I was asked by a reader if a minor and somewhat disagreeable character, appearing in only one scene, was modeled on a successful senior lawyer he knew, whom he thought I might also know. What tipped him off, he said, was not merely the physical description of the character, including the lawyer’s rather fat hands, but my description of the elegance with which the character used his cutlery as he ate his lunch. The reader asked me if I knew that the real-life lawyer was also an accomplished pianist, which might explain how the lawyer was so nimble with his fingers. I did not know. I merely noticed the unexpectedly beautiful way he ate.

How well, one wonders, would a novel drawing on real Bangladeshi figures, a novel critical of Dhaka elites and their power—how well would such a novel have fared in Bangladesh? It is not hard to imagine. Freedom of expression is under assault in Bangladesh, and from every quarter. The judiciary convict journalists or academics who raise important questions predicated in scholarly research; corporate advertisers are warned off major newspapers; bloggers are butchered with impunity; and newspaper editors receive threatening calls in the night. Is it even possible for anyone to write the foregoing lines other than from across the other side of the world? Bangladeshis deserve better; they are entitled to write and publish in freedom, to live in freedom.

None of which is to say that freedom of expression is flourishing everywhere else. It would be easy to list here countries such as Russia, Saudi Arabia, and China, where freedom of expression has never been more than a cruel pipe dream; or to cite various ways in which Western media conglomerates promote a self-serving perspective of the world; or to speak of Islamist attacks on the likes of Charlie Hebdo. But I need not go so far. My lead publishers, Farrar, Straus and Giroux, are American and my novel was largely written in upstate New York. It was first published in the US; publication in the UK came a month later, giving the novel a fighting chance to gain some traction before its British launch. As it happened, the novel was reviewed very well by prominent critics in the US and this most likely blunted the negative reaction we anticipated from some quarters in the UK. Artists are not protected from undue political and social pressures in countries like China. But it is only naivety or arrogance that keeps some people from seeing the genteel ways censorship operates in the West.

So how does all this relate to my exposition of what brought me here? Well, if I am asked what made it possible for this novel to succeed, then I have to say that it helped that the novel did not concern the powerful Bangladeshi political and military classes and that it was not first published in Bangladesh. It pains me to think that there are hugely talented writers in Bangladesh, yearning to publish beautiful works of fiction, but who cannot do so for fear of losing more—much more—than mere sales, prizes, or critical favor. My novel’s first outing was in a society with a relatively high degree of openness, and I must owe some part of whatever success I have had to that simple fact.

But I do take heart in the fact that, historically, so much exquisite writing has, somehow, like trees that crack rocks and shoot up through them, taken root and blossomed. Again, in Russia, in China, in oppressive South American, Iranian, and African regimes, writers have fought for their right to speak freely; where they haven’t won it, they have simply taken it—often facing terrible consequences. This has also been true for some women in the West, for some black writers in America, for some postcolonial authors in Europe. In the final analysis, I must believe that what has allowed them success is that they were bold enough to try.