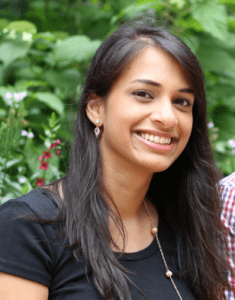 Today, we share Sana Khan’s story on being a Muslim American. The piece is Khan’s response to The M Word’s questionnaire.

Yes, I grew up in a Muslim household and identified as Muslim my whole life. Although I have not always actively practiced Islam or felt connected to it, I’ve always felt culturally Muslim.

Being Muslim in America means belonging to a diverse group of people in regard to race, beliefs, careers, and backgrounds. This is a beautiful thing because Muslims contribute to the country in so many different ways. However, it also means being stereotyped or prone to discrimination, whether in the workplace, social settings, or being criminalized. There is a sense of unity but also confusion about being pulled between two worlds–being American or Muslim. It would be ideal for these two to never be mutually exclusive, but given the current climate this is often challenging.

People often don’t guess that I’m Muslim, so I feel a responsibility to let others know that Muslims come in all sorts of forms. We aren’t confined to one image or definition, but are complex individuals with a variety of beliefs. I have the responsibility to inform others about customs specific to Muslims and bring a positive light to the religion and culture.