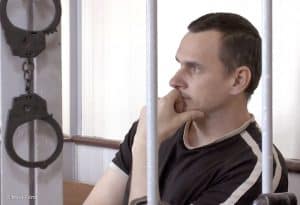 On February 26, the Day of Crimean Resistance to Russian Aggression, PEN America and 21 partner organizations around the world coordinated a global action in 24 cities in 16 countries calling to free the Ukrainian filmmaker and PEN/Barbey Freedom to Write Awardee Oleg Sentsov, who is imprisoned in Russia. Polina Kovaleva, the manager of PEN America’s Free Expression Program for Eurasia, talks about his case and the next advocacy action that PEN America is preparing for him.

There was always too much unreality around Oleg. In 2009 he wrote a play, Numbers, that later many people mistakenly thought was written after his detention in 2014—that is how well it showed life under an authoritarian regime and the consequences for those who dissent, which Oleg experienced himself, although much later.

His trial looked unreal too. It was more like a parody of a trial, a comedy where scenes are meant to be laughed at. There were laughs at Oleg’s trial, in fact—until the true 20-year sentence was announced. His accusations were based on the testimonies of two people, one of whom later contested that the testimony was received under torture. This didn’t convince the Russian court. Among other ridiculous things that Oleg was blamed for, he was also accused of attempts to bomb railway bridges in Simferopol, Sevastopol, and Yalta. There was no railway bridge in those cities at that time.

And then, recently, Oleg was moved from one horrifying penal colony to another even stricter one, from Yakutiya in the Far East to the Yamalo-Nenets Autonomous Okrug in the Far North, beyond the Arctic Circle, in a journey that took over a month—another horrifying thing that is hard to believe in. Amnesty International recently wrote about the cruel and degrading conditions inherited from the Soviet past using Oleg’s example.

On February 26, dozens of Oleg’s supporters around the world gathered together to shout out about the injustice that still keeps Oleg in prison, about our collective will to change it, and about the unreal things that should not become real, no matter if we are in Ukraine, France, or the United States. It concerns us all, and now is the moment to stand strong together in protection of our most important human right: the right to speak freely, the right to open dissent.

Join our global call to release Oleg Sentsov by tweeting the below image (download here) to your country’s Russian Consulate, or post it on their Facebook page, using the hashtag #FreeSentsov. A sample tweet is provided here:

An outspoken critic of Russia’s annexation of #Crimea, writer and filmmaker #OlegSentsov is currently serving a 20-year sentence for his #dissent. I stand with @PENamerican and call for his immediate release. #FreeSentsov @rcgnewyork 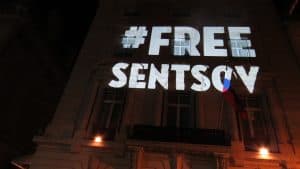 Or, retweet this tweet from PEN America, available here: 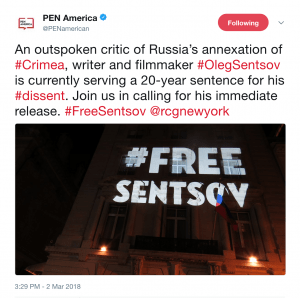 "Putin’s war is an attack on democracy and freedom... In joining the #LvivBookForum & @hayfestival... I support Ukrainian writers and readers... May this theatre of ideas and talent inspire more to raise their voices and share their gifts"—@MargaretAtwood https://www.hayfestival.com/lviv-bookforum

The #NobelPeacePrize is a poignant reminder it is 16 years since Anna Politkovskaya was assassinated. A Russian journalist and human rights defender who reported on Chechen War atrocities, Politkovskaya spoke truth to power and paid for that with her life. https://pen.org/advocacy-case/anna-politkovskaya/