The following post was written by the Artists at Risk Connection, a collaborative project led by PEN America.

The mysterious graffiti artist Banksy has struck again—this time right here in New York and in support of a cause close to PEN America’s heart. The artist’s latest mural, at the corner of Houston Street and Bowery, pays tribute to jailed Turkish painter Zehra Doğan, imprisoned for her art depicting destruction caused by Turkish military operations. Working with fellow artist Borf, Banksy painted Doğan behind bars, one of which is a pencil, symbolizing, perhaps, the artwork that led to her jail sentence. The bars also double as tally marks counting Doğan’s days in prison. 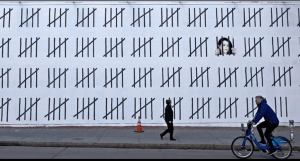 Doğan was arrested in July 2016 after painting a town destroyed in a Turkish army operation with Turkish flags over the damaged buildings. Prosecutors then accused her of spreading terrorist propaganda, claiming her artwork proved she was linked to the Kurdish Workers’ Party (PKK), which is banned in Turkey. “This painting is beyond the limit of criticism of the operations done by the security forces in order to restore public order,” reads the court’s decision.

Doğan has refused to back down, stating, “I was given two years and 10 months only because I painted Turkish flags on destroyed buildings. However, they [Turkish government] caused this. I only painted it.”

Banksy told The New York Times, “I really feel for her. I’ve painted things much more worthy of a custodial sentence.” His mural in support of Doğan can be seen at the corner of Houston Street and Bowery. A projection of Doğan’s painting can be seen above it, and Banksy has encouraged the public to share her art on social media, tagging Turkey’s president, Recep Tayyip Erdoğan. The Turkish president has conducted a sweeping crackdown on journalists and civil society. 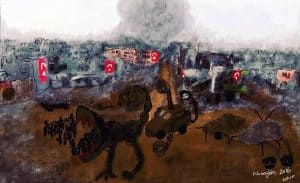 The painting for which Zehra Doğan was imprisoned

Doğan has continued to write, founding a newspaper with other prisoners, but she does not have access to art materials in prison. She is also barred from receiving letters that are not written in Turkish. We hope that Banksy’s highly publicized mural, combined with work done by the Artists at Risk Connection and PEN International, will help increase pressure on the Turkish government to release Dogan.

Learn more about her story here.