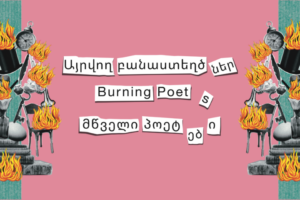 Georgia and Armenia have ancient cultures, histories, and languages that have survived under enormous pressure and despite violence from neighboring hegemonies. It is this common geography and shared history that make dialogue in the South Caucasus so crucial—and last week in Yerevan, Armenia, I joined my colleagues in facilitating that literary dialogue that is so needed, especially now.

For months, Armen Ohanyan and others from PEN Armenia, Paata Shamugia and others from PEN Georgia, and myself as Eurasia director for PEN America, have been planning the Burning Poet(s), a gathering designed to bring literary communities in Georgia and Armenia together in order to speak out for peace, free speech, and social justice in the region through a series of literary events, workshops, and an online campaign. Before the fall of the Soviet Union, Georgia and Armenia had a relationship that was largely mediated by a Russian-dominated Soviet government; with Russian as the language of mediation. Then, due to the repression of cultural rights, circumstances were quite different. Now, both Georgia and Armenia are independent nations with literary scenes flourishing in their native languages. We decided that it was imperative for Georgian and Armenian literary figures to build new relationships, shaped both by shared history and by desires for a democratic, independent future.

Thus, planning commenced. A date was set for the festival, and with sponsorship from the Human Rights House Foundation and help from the European Union and many other partners , we planned a busy week of literary festivities for both our working group and the greater public to enjoy. 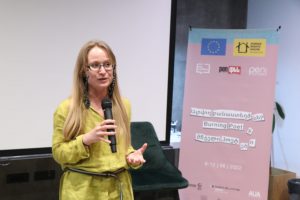 Among the greatest highlights of the festival was our evening gala at the Cafesjian Center for the Arts, a major hub for cultural events in Yerevan. The night’s performance was quite a hit, including a full audience eager to experience poetry in Georgian, Armenian, and English translation. “Words travel worlds. Translators do the driving,” said Anna Rusconi. Inga Zhgenti, Nazareth Seferian, Elina Alter, of PEN America’s Translation Committee, made this  trilingual event possible and a treat.

The next day, I hosted “Polina Sadovskaya’s Fantastic Douqan,” an event designed to build dialogue between Georgian and Armenian audiences. A ‘Fantastic Douqan’ is a platform with a history in futurism and avant-garde art before the Sovietization of Tbilisi, Georgia. In the 1920s and 1930s, Armenian and Georgian artists gathered in Tbilisi, an oasis and creative capital even after Soviet repressions began. However, this peace did not last long, and many who had joined together at the early-twentieth-century ‘Fantastic Douqan’ were forced to halt their creative expression; some were even murdered by Soviet authorities. 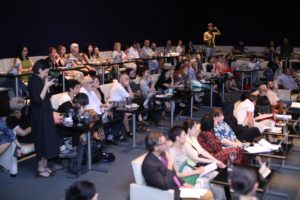 Using the title ‘Fantastic Douqan’ intended to exemplify the historic relationship between creative communities in Georgia and Armenia. In fact, the name ‘Burning Poet’ is itself a reference to a poem written by Diana Ukleba, a Georgian poet who was married to Giotto (Gevorg Grigoryan), an Armenian artist. Their relationship symbolizes what can be accomplished when artists, writers, and poets from these two countries come together. These references—from the Douqan to the festival title—also facilitate the remembrance of what cultural producers in these countries have had to overcome in the past century, particularly the horrors of Soviet repressions.

While much of the trip was spent learning and talking about creative writing and translation, my colleagues and I also advocated for the freedom to write and for the revitalization of Armenian-Georgian cultural ties. A highlight of our advocacy was a visit to the office of Armenian President Vahagn Khachaturyan, who welcomed us for a discussion about both struggles in the fight for free expression and opportunities to build a closer cultural connection between Armenia and Georgia. He was very open to our ideas. One of them was a revitalization  and renaming of the branch of the RA National Gallery which is currently called the Studio-Museum of Giotto, and adding Diana Ukleba’s name to it.

Other opportunities for education and advocacy were facilitated by the Heinrich Böll Stiftung South Caucasus office, which hosted a discussion on Armenian and Georgian masculinity by Armen Ohanyan and Davit Gabunia. Goethe Institute helped us organize a panel on women’s writing with writer Tamta Melashvili and chair of PEN Armenia’s Women’s Committee Lucine Kharatyan. Also, European Union Ambassador to Armenia, Andrea Wiktorin, met with writers from the region to present the EUPL winners of last two years Georgian writer Iva Pezuashvili and Armenian writer Aram Pachyan and express support for intercultural dialogue and international cooperation in cultural spaces. At each meeting, gathering, or festival event, we found an astounding level of enthusiasm for our initiative, and I was delighted by the high level of participation from everyone.

When I moved from New York to Tbilisi, Georgia last year with the intention of building closer ties between PEN America and the Eurasia region, I never expected so much success so quickly. Nonetheless, this is only the beginning of the Burning Poet(s) projects, with more readings, campaigning, translations, and Fantastic Douqans ahead. I cannot wait to watch it unfold.